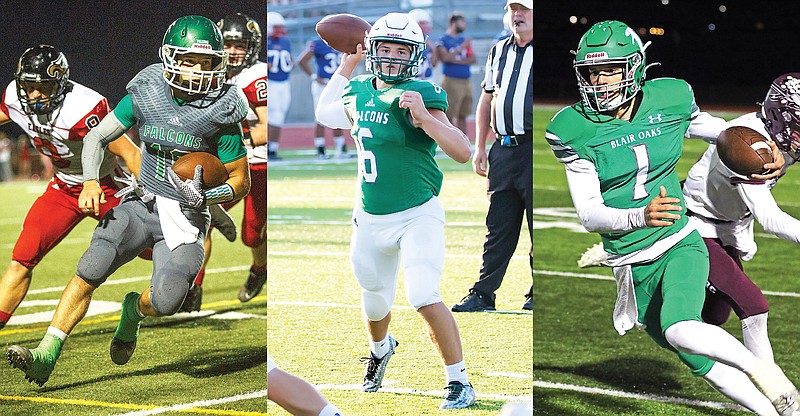 For the past nine seasons, the Blair Oaks Falcons have begun the year with a Hair sibling as the starting quarterback: Jordan Hair (left) from 2013-15, Nolan Hair (center) from 2016-18 and Dylan Hair (right) from 2019-21. (News Tribune file photos)

WARDSVILLE -- Scott and Sheila Hair swear this was never a grand plan of theirs.

But it has worked out really, really well.

“It is pretty neat,” said Sheila, their mother. “There’s nothing that beats Friday night lights.”

There have been dozens and dozens of Friday night lights for the Hair family in the past decade. But their sons’ interest in sports sprouted well before then.

“I played sports -- basketball, baseball, football -- so they would always tag along to softball games and basketball games and flag football games, whatever I was doing at the time,” said Scott, their father. “They just kind of caught on.”

Scott was both a running back and a defensive back during his high school playing days at Salem, so quarterback wasn’t a position that was on the radar when Jordan began playing football.

“Scott said he had no intention of making him a quarterback,” Sheila said.

“In flag football, Jordan was a running back,” Scott said. “When they started the Junior Falcons up here, the next thing you know, he was just throwing the football.”

Scott said Jordan was “freakishly accurate” when it came to throwing the ball, so naturally, he transitioned from running back to quarterback.

When it came to Nolan, they knew he would also be a quarterback.

“Dylan just … I don’t think he had any choice,” Scott said.

Jordan’s first high school football season was in 2012. As a freshman, he was listed as the backup quarterback behind Daniel Castillo.

But when Castillo suffered a foot injury in practice leading up to the Falcons’ district opener, Jordan became the starter for the next two games. He helped Blair Oaks to district wins against the Father Tolton/Calvary Lutheran co-op and Montgomery County.

After Blair Oaks took second place in Class 2 that season, Jordan became the starting quarterback the following year. He led the Falcons to the state semifinals in 2013 and 2015, as Blair Oaks won its first 13 games his senior season.

“We had a lot of good athletes back then, and he was pretty small until about his senior year,” Scott said. “He still could throw it pretty good and he could run pretty good, but he had a lot of talent around him that helped him out.”

Jordan’s final year with the Blair Oaks football team was Nolan’s freshman season. Nolan made his way into games when the Falcons had a substantial lead, throwing a touchdown pass and running for another touchdown in the first round of districts against Versailles.

But as the start of the 2016 season approached, it wasn’t a guarantee Nolan would take over for Jordan as the starting quarterback. When the Falcons hosted their Jamboree a week prior to the season opener, Nolan shared quarterback duties with Jake Van Ronzelen.

However, the following week against Kirksville, Nolan started at quarterback and Van Ronzelen lined up behind him at running back.

Scott had a sense Nolan would be the quarterback earlier that summer.

“When we went to Branson to that team camp, you could kind of start to see the switch,” Scott said. “Van Ronzelen was a great athlete, and it just kind of fell into a spot for him to move to running back and Nolan to play quarterback. I kind of knew that after we left Branson, that (Nolan) was probably going to start.”

It worked out well for Van Ronzelen, who became an all-state running back that season and broke the school’s single-season rushing record.

It worked out really well for Nolan, who two years later led Blair Oaks to its only undefeated season and its first state championship in 12 years.

“That group, they were just like Jordan’s group,” Scott said. “I coached Nolan’s group all through Junior Falcons and they got along great, they worked together great, and it showed in high school.”

The 2018 state title season was Nolan’s senior year, and Dylan was going to be in high school the following year.

This time, however, Scott wasn’t so certain Dylan would take over immediately at quarterback for his older brother.

“We went to Lee’s Summit for a 7-on-7,” Scott said. “Dylan went down with the junior varsity, and the varsity was down on the other field. Dylan’s first four passes were interceptions, and I think three of them went for touchdowns.

“Then later in the night, he went down and threw some passes at the varsity level, and he did all right,” Scott said. “When we hosted C.B.C. (in 7-on-7), it was kind of like the Branson thing. You could see the swing. I called Sheila and I said, ‘He’s going to start.’”

Dylan has started in each of the 39 games the past three seasons at Blair Oaks, guiding the Falcons to the 2020 state championship -- their first state title at the Class 3 level. With the COVID-19 pandemic, the Hairs weren’t even sure there was going to be a football season that year.

“It was a pretty weird season, for sure,” Scott said. “We didn’t know what was going to happen.”

There has plenty of success along the way for the Hair brothers, but it hasn’t always been smooth sailing. After all, when you play sports, it’s hard to avoid injuries.

During their high school careers, Jordan suffered a knee injury, Nolan had a hairline fracture in his right leg -- which caused him to miss five games during the 2017 season -- and Dylan took a hit to the helmet that caused him to miss the final 35 minutes of last season’s district title game at Mexico.

“It’s weird, all three of them broke their foot in seventh grade,” Sheila said. “And all three of them did something their junior year. It’s been like the ‘seventh-grade curse’ and the ‘junior year curse.’ Now, it’s a laughing matter at the house, but I said, ‘You all don’t have to do everything the same.’”

“We know, with sports, it’s part of the game,” Scott said.

“But that last one with Dylan scared the bejeebies out of me,” Sheila added.

Before there was success on the football field, the Hair brothers were very competitive at home when they were younger.

“They would joke at home,” Sheila said. “They were good and supported each other, but the older two would sit there and trash talk each other quite a bit.”

The competition at home was helpful when Dylan took over as quarterback as a freshman.

“Because they don’t take it easy on him,” Sheila said. “When they’re at home, I’d come out there yelling at them. I’m like, ‘He’s seven years younger than Jordan, four years younger than Nolan.’ But they’d say, ‘Oh Mom, he can do it.’”

The trash-talking even carried its way into the Blair Oaks football record books.

When Jordan graduated, he held the Blair Oaks career records for most passing touchdowns, most passing yards and most total yards.

Before Nolan graduated, he broke his older brother’s career records for most passing touchdowns, most passing yards and most total yards.

“Nolan and Jordan were bickering back and forth about records one time,” Scott said. “Dylan was just sitting there. He’s the quiet one out of the bunch, and out of nowhere he’s like, ‘I’m going to beat all of your records.’”

Well, he’s certainly on his way.

As of now, there are only two Blair Oaks quarterback records the Hairs don’t hold: longest touchdown pass in a game (Cade Stockman holds that distinction with a 97-yard pass in 2017) and most completions in a season (Castillo completed 187 passes in 2011, but the Hairs have come close to reaching that record a few times).

And much like their kids have said through the years, the parents also acknowledge that success is shared.

“Football is definitely a team sport,” Sheila said. “They can’t do this by themselves. They have to have their receivers and their offensive line to help them.”

The three sons have also followed in their father’s footsteps, playing basketball in the winter and baseball in the spring.

“But they never said they didn’t want to play,” Sheila said. “Jordan and Nolan play slow-pitch softball down in Osage County, and they love it.”

When you factor in basketball and baseball postseasons, the Hair family keeps busy from the beginning of August until the end of May, and sometimes, even the first week of June.

“We don’t get any free time,” Scott said.

“The COVID year was probably the first year we got a break,” Sheila said.

Sheila, a Blair Oaks graduate, played softball and competed in track and field. Each year, she gets a chance to follow in her sons’ footsteps for one night when the Blair Oaks football program holds its “Moms Practice” during the preseason.

“It just amazes me the stuff they have to learn, and that they remember it,” Sheila said. “I’m like, ‘You all can’t do this with your school work?’”

As Dylan begins preparation for his senior season, which starts with Monday’s first day of football practice, Scott and Sheila promise there won’t be a Hair to take over for Dylan at quarterback in 2023. The rest of the Tri-County Conference football community will take a collective sigh of relief with that news.

“It’s going to be bittersweet,” Sheila said. “Each year, when the kids graduate, I knew I had another one (coming through). But this is it.”

Scott and Sheila’s weekends this fall will be plenty busy, with Dylan playing on Friday nights and Nolan playing Saturdays for the Truman State football team.

After Dylan graduates high school, they won’t have any more kids playing at Blair Oaks, but they still plan to come to the Falcons’ home games.

“It’s pretty fun to come up here and watch them play,” Scott said.