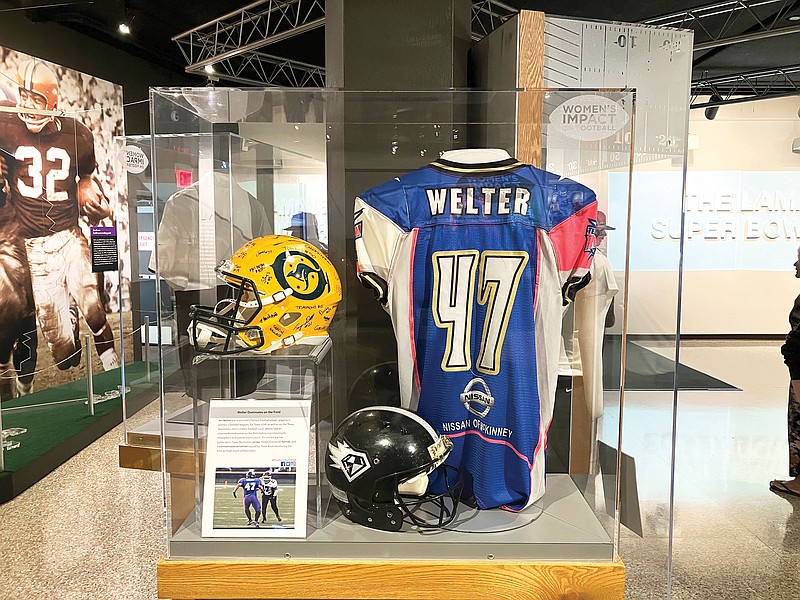 This photo shows a display with Jen Welter’s blue-and-pink jersey Friday at the Pro Football Hall of Fame in Canton, Ohio. (Associated Press)

CANTON, Ohio -- A 15-year-old boy made his way through the Pro Football Hall of Fame museum Friday, checking out the memorabilia and bronze busts before stopping to take a picture of Jen Welter’s blue-and-pink jersey to send to his younger sister.

“She will love this,” said Zach Fleming, a Pittsburgh Steelers fan in town with his dad for the first time. “I want her to know girls can make the Hall of Fame, too.”

Welter became the first woman to coach an NFL game in 2015 when she joined the Arizona Cardinals as an assistant coaching intern for training camp and the preseason.

The shirt, pants and sneakers she wore on the sideline in all four exhibition games are on display at a new exhibit in the Pro Football Today area of the museum.

Welter’s game-worn Texas Revolution jersey, her Dallas Diamonds helmet and a commemorative helmet signed by Team Australia during her time as head coach of the national team is also displayed in a separate glass enclosure.

The “Women’s Impact on Football” exhibit debuted ahead of this week’s enshrinement festivities. It features artifacts from women who have played, coached, officiated and broadcast the game at its highest level.

“There’s a lot of women involved in pro football and we wanted to recognize their contributions and tell their stories,” said Ben Ankrum, assistant curator at the Pro Football Hall of Fame. “We’ve had other exhibits featuring women in pro football and it got to the point where we could do something larger and more permanent.”

Other items on display include:

• Callie Brownson’s game-worn jacket and a signed ball from the game in which she became the first woman to serve as a position coach for an NFL regular-season game with the Cleveland Browns on Nov. 29, 2020. Brownson filled in as the tight ends coach when Drew Petzing didn’t travel with the team after his wife gave birth to the couple’s first child.

• Katie Sowers’ 49ers polo from the 2017 season, when she became only the second woman to serve as a full-time NFL coach. San Francisco hired Sowers as an assistant for the 2017 season. Kathryn Smith was the first female full-time coach with the Buffalo Bills in 2016.

• Hannah Storm’s and Andrea Kremer’s headsets from 2018, when they became the first all-female broadcast team to call an NFL regular-season game.