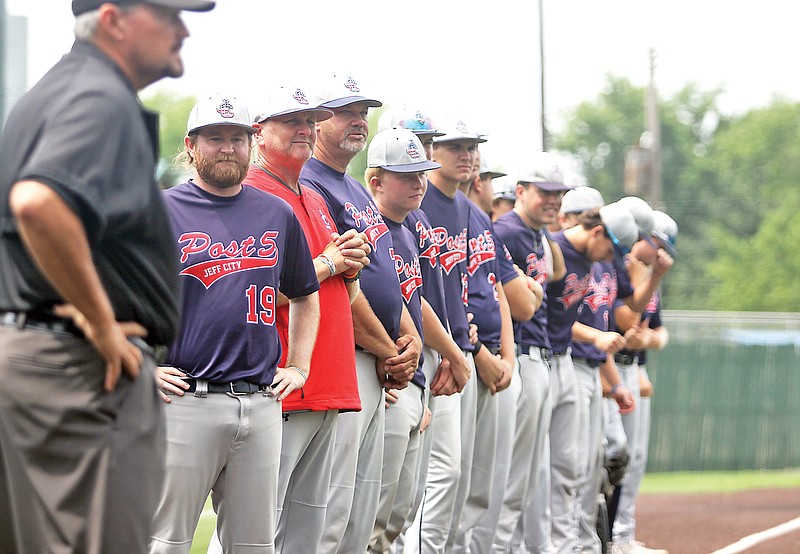 PELHAM, Ala. -- It was an eventful seventh inning for the Jefferson City American Legion Post 5 Seniors.

After losing a two-run lead in the top half of the inning, the first four batters reached base in the bottom half for the Post 5 Seniors. With the bases loaded and no outs, Jaden Kolb dropped a single into right-center field, scoring Luke Cavender as the tying run and Calen Kruger as the winning run in a 4-3 victory against Pittsburg (Kan.) Post 64 in an elimination game of the American Legion Mid-South Regional at Bobby Hayes Stadium.

With Jefferson City trailing 3-2, Cavender started the inning with a single up the middle, then Kruger followed with a single to left field to move the tying run into scoring position. Nick Jeffries bunted to advance the runners, but everyone was safe, loading the bases for Kolb.

Facing a 2-2 count, Kolb lifted a high fly ball into right-center field. The ball landed between Pittsburg’s center and right fielders, as Cavender scored easily to tie the game and Kruger beat the throw home to score the winning run.

The Post 5 Seniors took a 1-0 lead in the first inning. Jeffries drew a one-out walk, stole second base and scored on an error.

In the third, Kolb reached on an error, moved to third base on Jacob Schulte’s double to left field and scored on Holden Brand’s groundout to extend Jefferson City’s lead to 2-0.

Chase Schnieders pitched six scoreless innings to start the game for the Post 5 Seniors, but he ran into some trouble in the seventh, starting the inning with back-to-back walks.

Nate Roark came in to pitch and posted back-to-back strikeouts, putting Jefferson City one out away from victory. Post 64’s Trevor Amershek followed with a single to load the bases, Payton Morrow drew a bases-loaded walk to force in a run and Kaleb Scales hit a two-run single to put Pittsburg in front 3-2.

Schnieders went six-plus innings in his no-decision, throwing 63 of his 107 pitches for strikes. He allowed just two runs on two hits with nine strikeouts and four walks.

Roark got the win for the Post 5 Seniors, striking out two and walking one while giving up one runs on two hits.

Jefferson City finished the game with seven hits. Trevor Jordan added a double, while Jack Robertson and Jeffries each had a single.

Pittsburg, which won the Kansas state championship last Saturday, ends its season with a 17-12-1 record.