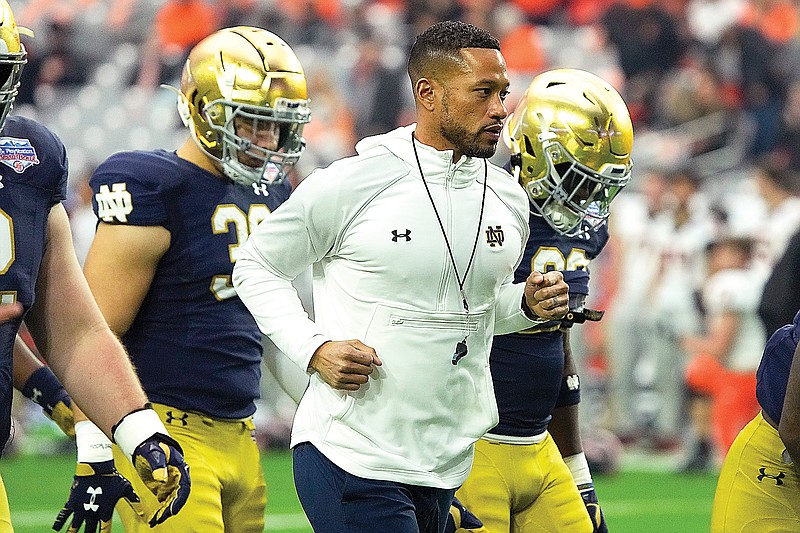 In this Jan. 1 file photo, Notre Dame coach Marcus Freeman takes the field prior to the Fiesta Bowl against Oklahoma State in Glendale, Ariz. (Associated Press)

SOUTH BEND, Ind. -- Notre Dame coach Marcus Freeman isn’t wasting any time. Not with the Irish’s season opener against the coach’s alma mater coming up on the horizon.

Following a two-hour practice Friday morning in hazy, humid conditions, the 36-year-old Freeman told his players they had work to do before they visit Ohio State on Sept. 3 for a matchup of two schools expected to be ranked high in the Associated Press preseason Top 25 poll.

“Right now, we’re starting out at ground zero,” said Freeman, who played linebacker for the Buckeyes under Jim Tressel from 2004-08. “Long practices … tough, hard practices because we have to develop fast, man. We’ve got to be ready to roll right out of the gate.”

Two Irish offensive linemen expected to be starters -- sophomore right tackle Blake Fisher and senior center Zeke Correll -- both missed practice time when they were overcome by heat. Afterward, Freeman sternly told his players what he expected from them the rest of the preseason.

“It has to be hard,” Freeman said. “It’s not changing. We’re not changing what we’re doing. It’s going to be hard. We had a couple of guys not finish practice today. It’s the trainer’s job to make sure they protect the player. It’s (the players’) job to make sure they are available for practice. The length of practice, the effort, the way we’re going to challenge our players -- that’s not going to change.”

Freeman was hired by Notre Dame before last season to serve as Brian Kelly’s defensive coordinator. He was elevated to head coach after Kelly left for LSU following an 11-1 regular season.

Notre Dame’s 37-35 loss to Oklahoma State in the Fiesta Bowl on New Year’s Day was Freeman’s head coaching debut with the Fighting Irish.

The eight months since then have been a whirlwind of activity for Freeman -- building a new staff led by coordinators Tommy Rees (offense) and Al Golden (defense), recruiting, spring football, more recruiting, alumni and other social media, and even more recruiting.

Freeman, however, is glad to be back in his coaching element, and the former linebackers assistant enjoys immersing himself with all the different position groups on both sides of the line of scrimmage.

Freeman spent his first fall practice watching the development of a new offensive line under returning assistant Harry Hiestand. Jarrett Patterson, the team’s starting center the past two seasons, has moved to left guard with Correll returning to center. Josh Lugg has moved to right guard, with Fisher and fellow sophomore Joe Alt the tackles.

Sophomore Tyler Buchner was getting first-team reps ahead of junior Drew Pyne at quarterback.

“It’s a two-quarterback battle right now between Tyler and Drew,” Freeman said of the competition to find Jack Coan’s successor. “I love the competition aspect of it. But as soon as we’re ready to name a starting quarterback, we’re going to do it.”