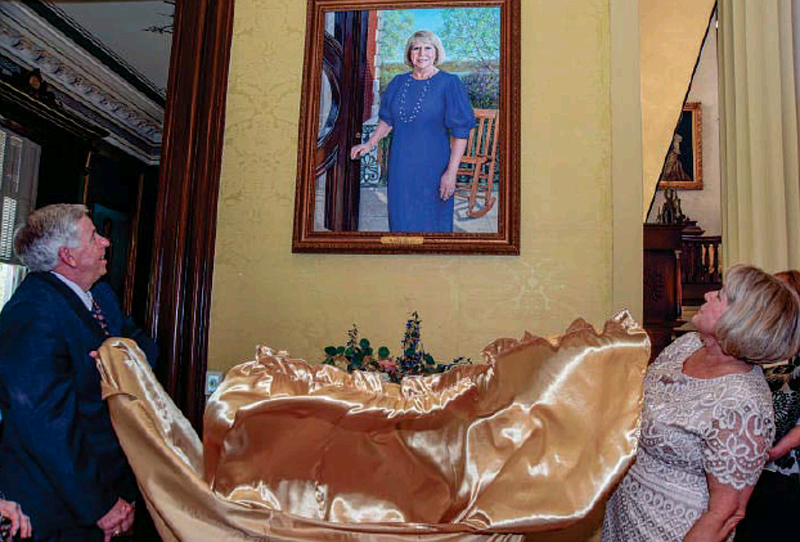 First lady Teresa Parson and Gov. Mike Parson unveil the portrait of the first lady Friday at the Governor's Mansion.

Missouri's first lady Teresa Parson said she couldn't help but be emotional during the unveiling of her portrait Friday afternoon in the Missouri Governor's Mansion.

Parson thanked artist Lisa Ober, of St. Louis, for the work she had done.

"Thank you Lisa for making me feel so comfortable all through the process," she said as her voice broke. "Beside getting to know an accomplished artist, I now have a new friend. I want to thank her for her guidance, her expertise and her friendship during this process."

The portrait depicts the first lady opening the door and welcoming visitors to the Governor's Mansion, which she calls the People's House. The piece includes eight hidden symbols:

• The numeral 150 on the door lock represents the age of the Governor's Mansion.

• The numeral 200 in the handrail on the porch indicates 200 years of Missouri statehood.

• The royal blue dress depicts a school color of Bolivar, the governor and first lady's hometown.

• The year 1985 on the door handle identifies when the governor and first lady were married.

• Initials SCH & KLP reflected on the door front are for the governor and first lady's children.

• The number six in the handrail shows how many grandchildren they share.

• Forty pearls on her necklace represent her years in the banking industry.

• The number 57 in the tree branch is a reminder Mike Parson is the 57th governor.

"Today is the first lady's day," Mike Parson said. "I don't know that she ever signed up to be the first lady quite like it happened, but I'll tell you what, there's nobody that's ever been as classy a first lady of the state of Missouri."

The governor said his wife gave up a lot to be the first lady. He admitted he was excited about the portrait, too. He said the couple started from humble beginnings.

When Teresa Parson was little, she stuffed newspapers in the holes in her shoes because she was so embarrassed about them, he said.

"I thought about that story today," he said. "And when you see this portrait tonight, you'll understand why that is so important to our family, and to know where we came from. And now she is going to be the first lady of the state of Missouri -- from those holes in the shoes to one of the classiest ladies."

Stephanie House, daughter of the first lady and governor, said she found it difficult to sum up what it meant to grow up in her household.

"When I think about what impacts me the most, it comes down to her hard-work ethic, her unconditional love for her family, and the support she shows our family and the people of Missouri," House said. "Simply put, my mom is the hardest-working woman I have every met."

That work ethic, House said, came down from Teresa Parson's parents. She learned the value of hard work at a young age, and modeled it her entire life.

She worked her way up through the banking industry and eventually became a senior vice president of a bank.

The portrait is a big deal for the state of Missouri, said Rep. Rudy Veit, R-Jefferson City. Veit brought his 13-year-old granddaughter to the unveiling. The two milled through a crowd of more than 350 people who had accepted invitations to the event. The first lady is a remarkable person, Veit said.

Veit's granddaughter, Reagan Fleming, said she was impressed by the event.

"The history is incredible," she said. "You don't (normally) get to see the hard work that goes into stuff."