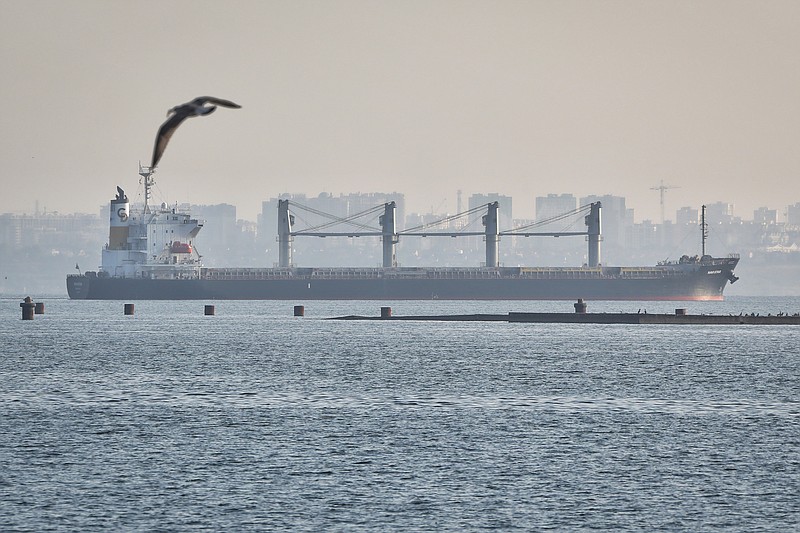 The ship Navi-Star carrying a load of corn starts its way from the port in Odesa, Ukraine, Friday, Aug. 5, 2022. Ukraine is a major global grain supplier but the war had blocked most exports, so the July 22 deal aimed to ease food security around the globe. World food prices have been soaring in a crisis blamed on the war, supply chain problems and COVID-19. (AP Photo/Nina Lyashonok)

ISTANBUL (AP) -- Three more ships carrying thousands of tons of corn left Ukrainian ports Friday and traveled mined waters toward inspection of their delayed cargo, a sign that an international deal to export grain held up since Russia invaded Ukraine was slowly progressing. But major hurdles lie ahead to get food to the countries that need it most.

The ships bound for Ireland, the United Kingdom and Turkey follow the first grain shipment to pass through the Black Sea since the start of the war. The passage of that vessel heading for Lebanon earlier this week was the first under the breakthrough deal brokered by Turkey and the United Nations with Russia and Ukraine.

The first vessels to leave are among more than a dozen bulk carriers and cargo ships loaded months ago but stuck in ports since Russia invaded in late February. While the resumed shipments have raised hopes of easing a global food crisis, much of the backed-up cargo is for animal feed, not for people to eat, experts say.

The Black Sea region is dubbed the world's breadbasket, with Ukraine and Russia key global suppliers of wheat, corn, barley and sunflower oil that millions of impoverished people in Africa, the Middle East and parts of Asia rely on for survival.

However, the initial shipments are not expected to have a significant impact on the global price of corn, wheat and soybeans. For starters, the exports under the deal are off to a slow, cautious start due to the threat of explosive mines floating off Ukraine's Black Sea coastline.

And while Ukraine is a major exporter of wheat to developing nations, there are other countries, such as the United States and Canada, with far greater production levels that can affect global wheat prices. And they face the threat of drought.

"Ukraine is about 10 percent of the international trade in wheat, but in terms of production it is not even 5 percent," said David Laborde, an expert on agriculture and trade at the International Food Policy Research Institute in Washington.

The three ships departing Friday were accompanied by Ukrainian pilot ships for safe passage because of explosive mines strewn in the Black Sea. The vessels set out with more than 58,000 tons of corn, but that is still a fraction of the 20 million tons of grains Ukraine says are trapped in the country's silos and ports and that must be shipped out to make space for this year's harvest.

Around 6 million tons of the trapped grain is wheat, but just half of that is for human consumption, Laborde said.

There is an expectation that Ukraine could produce 30-40 percent less grain during the next 12 months due to the war, though other estimates put that figure at 70 percent.

One reason prices remain high is the impact of drought on harvests in North America, China and other regions, as well as the higher price of fertilizer needed for farming.

The three ships that departed Ukraine on Friday give hope exports will ramp up to developing nations, where many are facing the increased threat of food shortages and hunger.

"The movement of three additional vessels overnight is a very positive sign and will continue to build confidence that we're moving in the right direction," Haines said. "If the flow of grain from Ukraine continues to expand, it will help relieve global supply constraints."

It added the Joint Coordination Center -- run by officials from Ukraine, Russia, Turkey and the U.N. overseeing the deal signed in Istanbul last month -- authorized the three ships and inspected a ship headed for Ukraine. The Barbados-flagged Fulmar S was inspected in Istanbul and is headed for the Chornomorsk port.

The checks seek to ensure that outbound cargo ships carry only grain, fertilizer or food and not any other commodities and that inbound ships are not carrying weapons.

In a statement after the talks that lasted four hours, Putin and Erdogan emphasized "the necessity of a complete fulfillment of the package deal reached in Istanbul ... including unhindered export of Russian grain and fertilizers."

In other developments Friday, Ukraine's presidential office said at least eight civilians were killed and 16 others wounded in the latest Russian shelling.

The eastern Donetsk region has for weeks faced the most intensive Russian barrage. Donetsk Gov. Pavlo Kyrylenko repeated his call for all residents to evacuate.

"Shellings and bombings are going round the clock, and people who refuse to evacuate risk being killed on their pillows," Kyrylenko said in televised remarks.

In Ukraine's second-largest city of Kharkiv, three districts have come under massive shelling. Several apartment buildings and a street market were damaged, and three people were wounded.

Russian shelling also targeted the city of Zaporizhzhia and several towns along the front-line in the region. For a second straight day, the Russians also shelled the city of Nikopol that faces the Zaporizhzhia nuclear power plant across the Dnieper River. Dozens of houses were damaged.

Energoatom, which operates Ukraine's nuclear power plants, said three shells landed in the evening on the territory of the Zaporizhzhia plant, which is Europe's largest. No casualties or damage to the reactors was reported.

"This is an open and audacious crime, an act of terror," Ukrainian President Volodymyr Zelenskyy said in his nightly video address.

The Russians also hit the southern city of Mykolaiv. The regional governor, Vitaliy Kim, said Russian forces fired on the city after lunchtime, causing extensive damage, killing an unspecified number of people and injuring at least nine. He said the fire came from the direction of Kherson, the Russian-occupied city about 30 miles to the southeast. 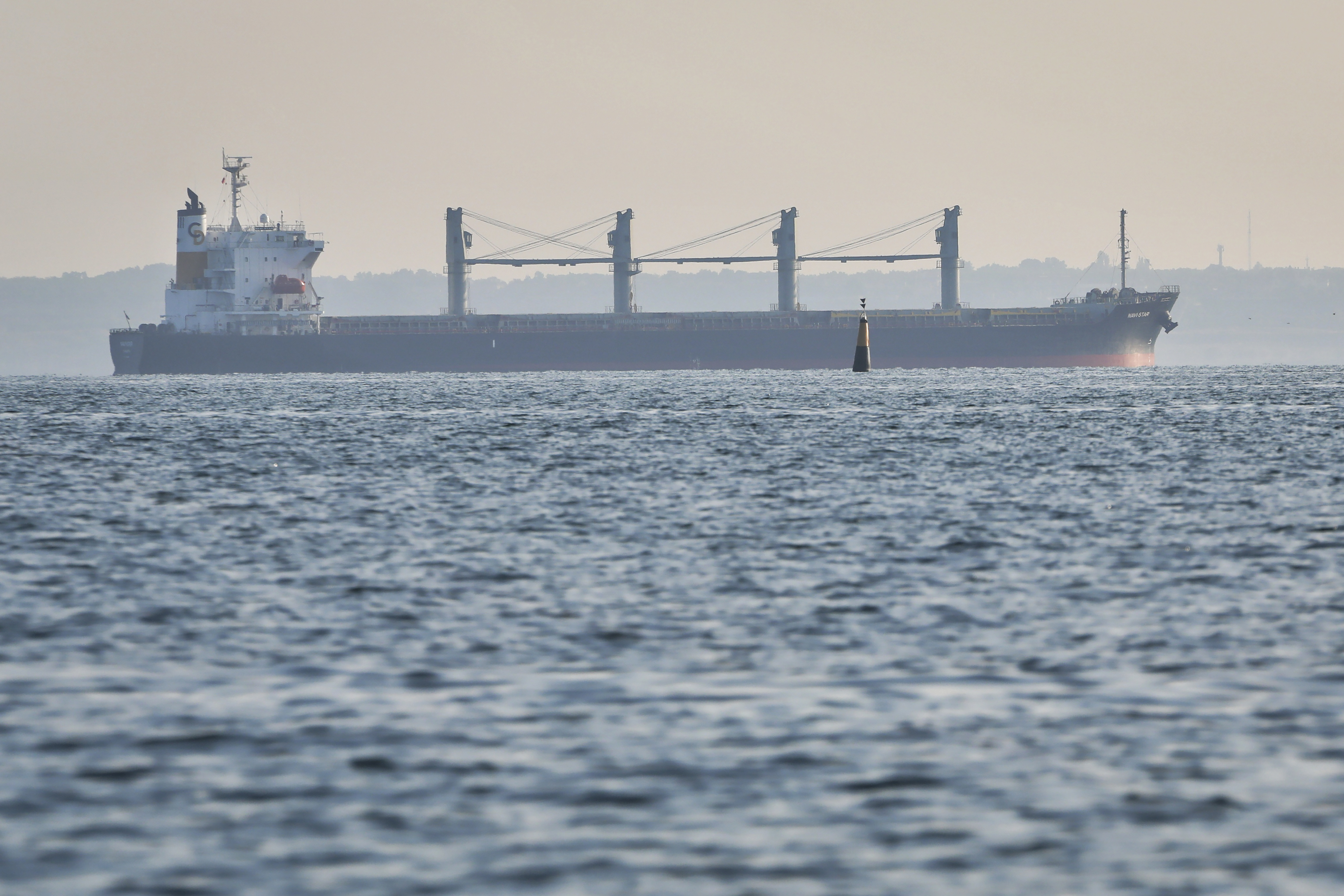 The ship Navi-Star carrying a load of corn sails from the port in Odesa, Ukraine, Friday, Aug. 5, 2022. Ukraine is a major global grain supplier but the war had blocked most exports, so the July 22 deal aimed to ease food security around the globe. World food prices have been soaring in a crisis blamed on the war, supply chain problems and COVID-19. (AP Photo/Nina Lyashonok) 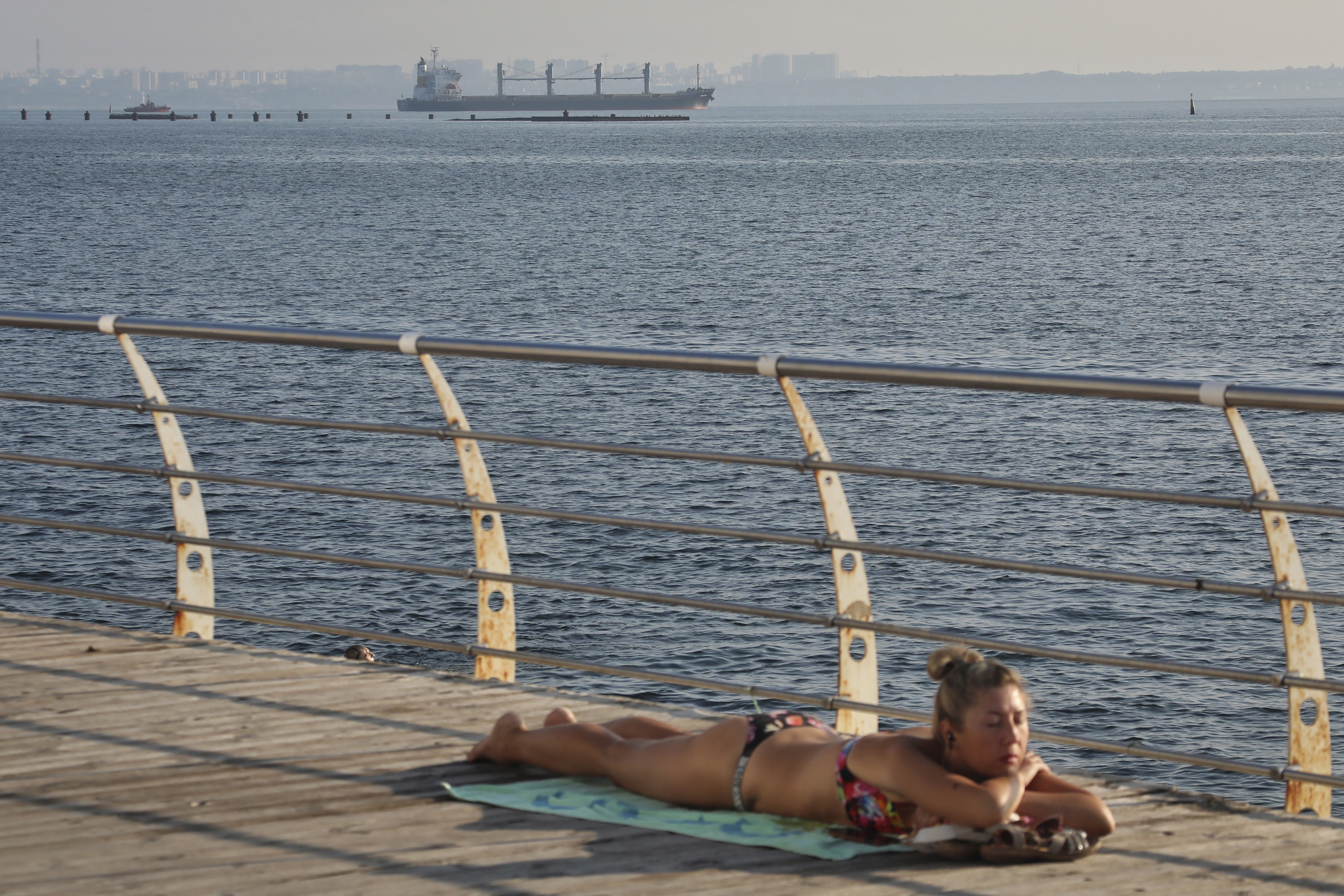 The ship Navi-Star, which sits full of corn, leaves the port in Odesa, Ukraine, Friday, Aug. 5, 2022. Ukraine is a major global grain supplier but the war had blocked most exports, so the July 22 deal aimed to ease food security around the globe. World food prices have been soaring in a crisis blamed on the war, supply chain problems and COVID-19. (AP Photo/Nina Lyashonok) 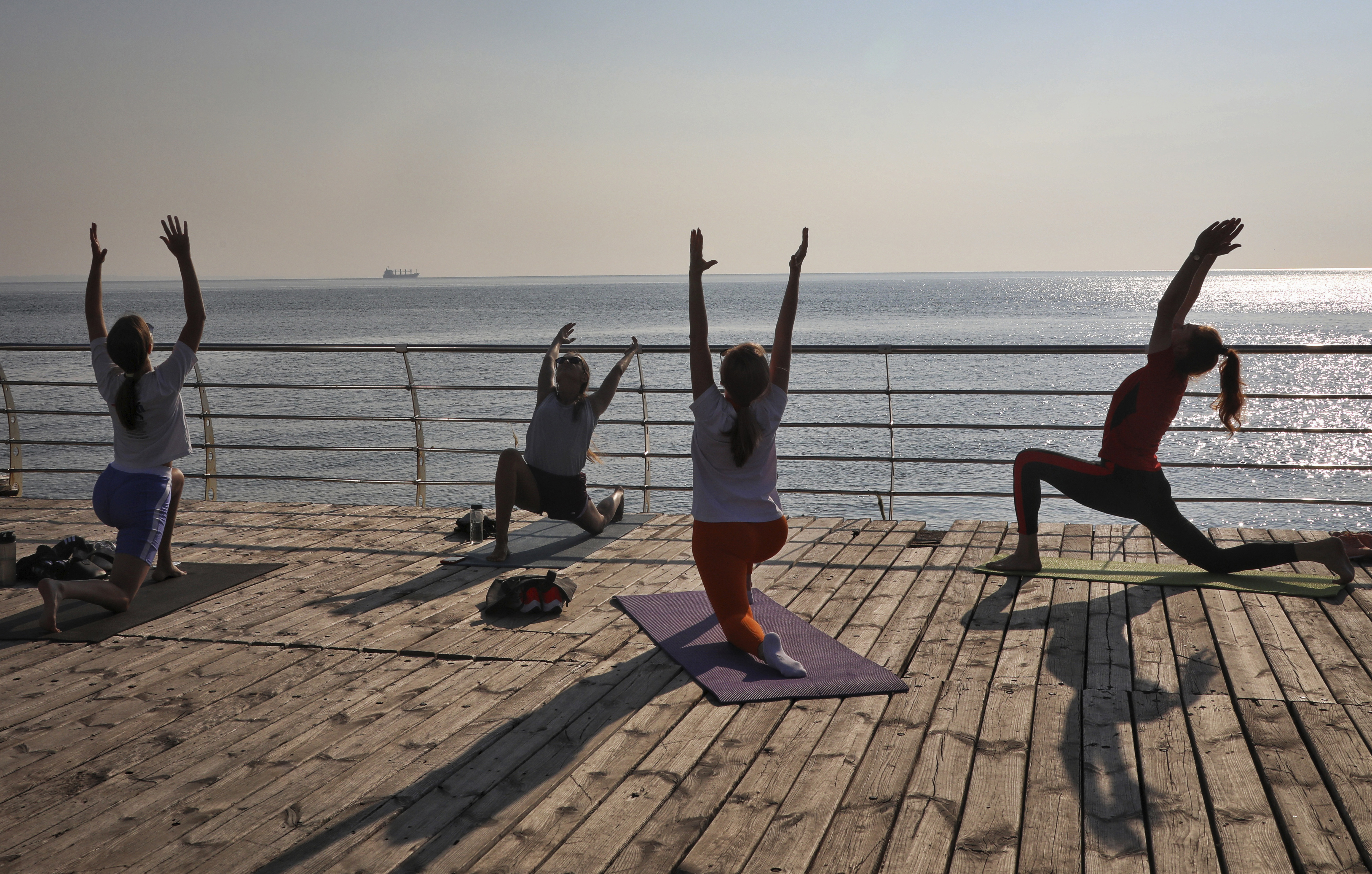 Women practice yoga on a beach by the Black Sea as the ship Navi-Star carrying a load of corn, leaves the port in Odesa, Ukraine, Friday, Aug. 5, 2022. Ukraine is a major global grain supplier but the war had blocked most exports, so the July 22 deal aimed to ease food security around the globe. World food prices have been soaring in a crisis blamed on the war, supply chain problems and COVID-19. (AP Photo/Nina Lyashonok) 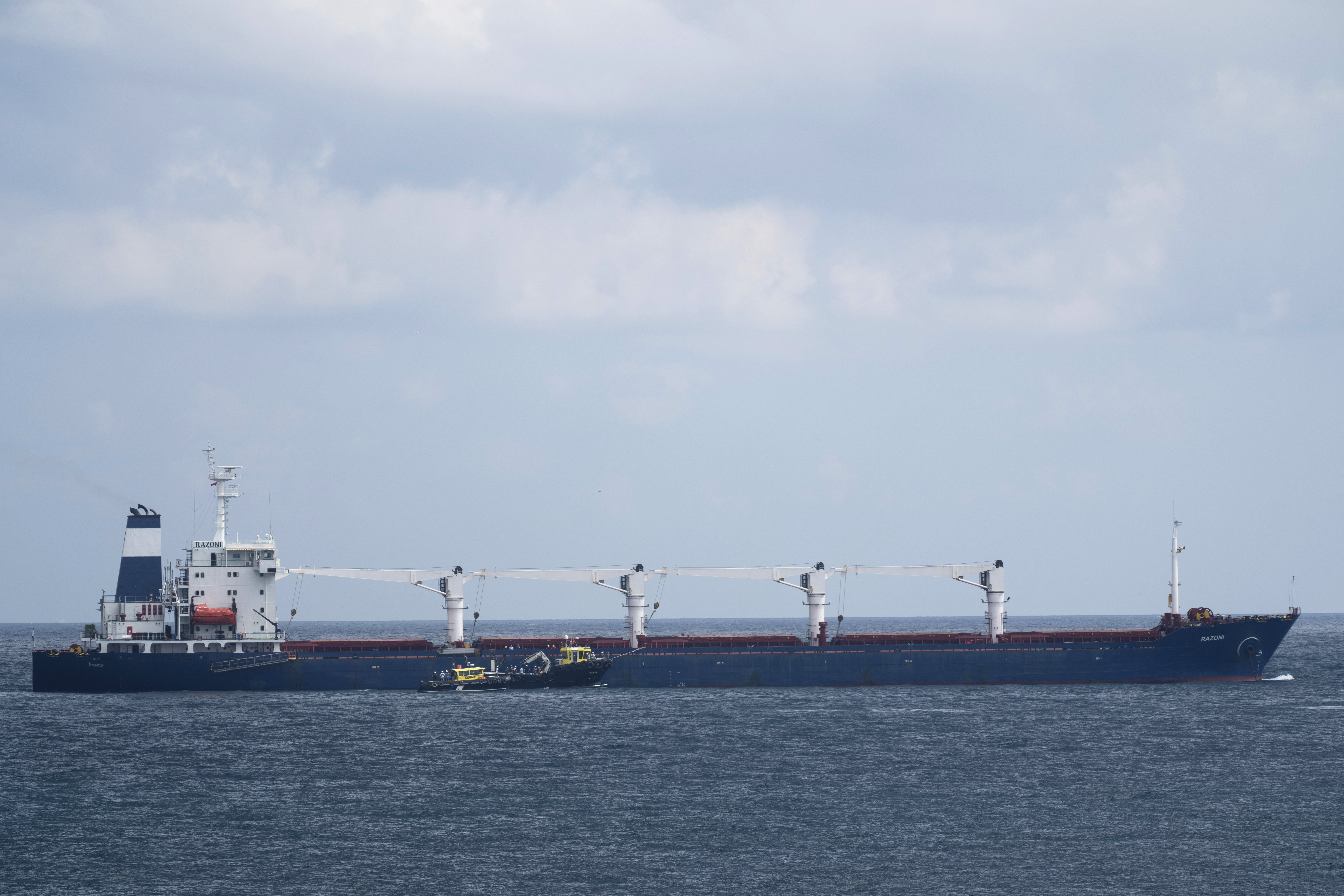 Russian, Ukrainian, Turkish and U.N. officials arrive to the cargo ship Razoni for inspection while it is anchored at the entrance of the Bosphorus Strait in Istanbul, Turkey, Wednesday, Aug. 3, 2022. The Sierra Leone-flagged Razoni, loaded up with 26,000 tons of corn, is the first cargo ship to leave Ukraine since the Russian invasion, and set sail from Odesa Monday, August 1, 2022. Its final destination is Lebanon. (AP Photo/Khalil Hamra) 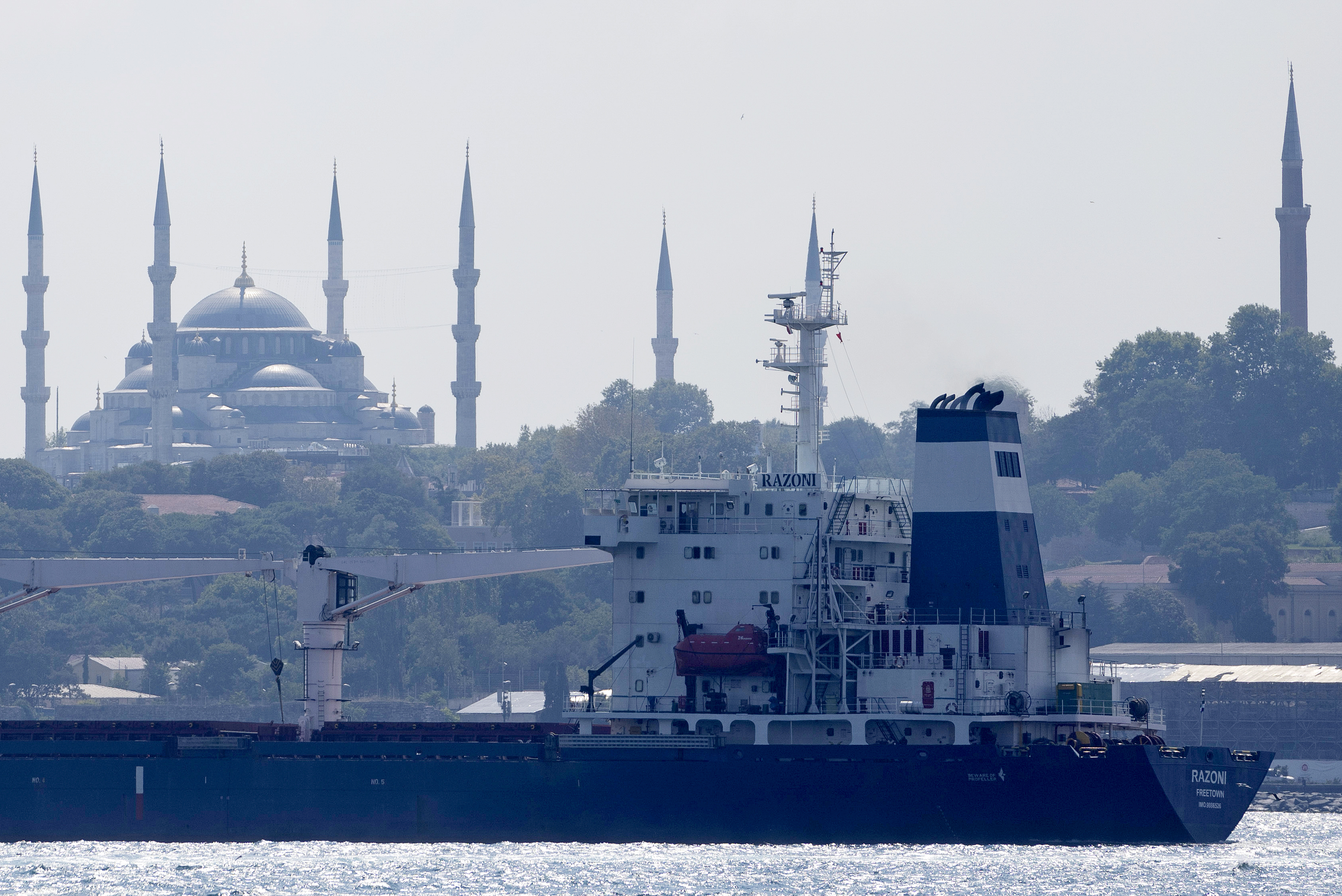 The cargo ship Razoni crosses the Bosphorus Strait in Istanbul, Turkey, Wednesday, Aug. 3, 2022. The first cargo ship to leave Ukraine since the Russian invasion was anchored at an inspection area in the Black Sea off the coast of Istanbul Wednesday morning, awaiting an inspection, before moving on to Lebanon. (AP Photo/Khalil Hamra)