Taliban claim they are unaware of al-Qaida leader in Afghanistan 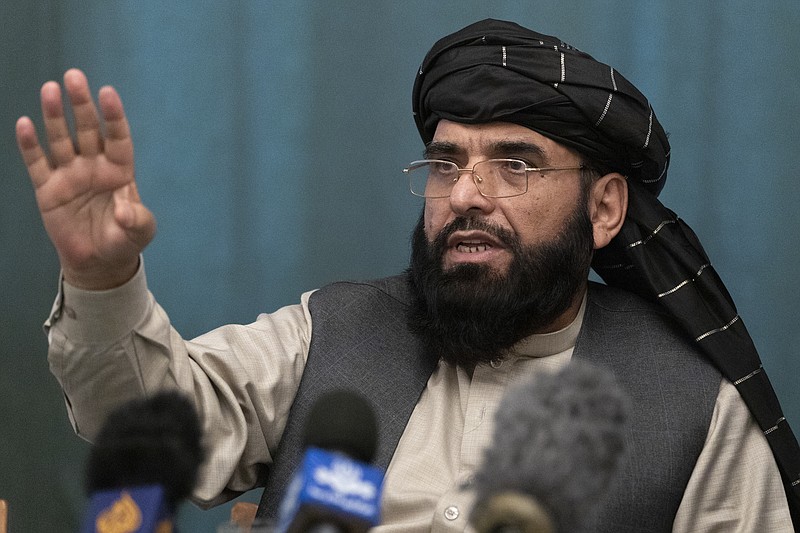 FILE - Suhail Shaheen, Afghan Taliban spokesman speaks during a joint news conference in Moscow, Russia. The Taliban broke its silence Thursday, Aug. 4, 2022, days after a U.S. drone strike killing al-Qaida’s top leader in Afghanistan’s capital, acknowledging his slaying, and pledging to launch an investigation. Shaheen, the head of the group’s political office in Doha, Qatar told the Associated Press in a what’s App message that “The government and the leadership weren’t aware of what is being claimed, nor any trace there. Islamic Emirate of Afghanistan reiterates its commitment to Doha Agreement.” AP Photo/Alexander Zemlianichenko, Pool, File)

ISLAMABAD (AP) -- The Taliban said Thursday they are investigating what they described as "claims" al-Qaida chief Ayman al-Zawahri was killed in a U.S. drone strike in the Afghan capital.

However, the group insisted in a statement it "has no knowledge of the arrival and residence" of al-Zawahri in Afghanistan.

The statement marked the first time the Taliban leadership addressed the U.S. announcement al-Zawahri was the target of Sunday's strike. However, despite the Taliban denial of knowledge of al-Zawahri's presence, U.S. officials have said the al-Qaida head was staying at a Kabul safe house linked to the deputy leader of the Taliban. The strike killed al-Zawahri when he stepped out onto the safe house's balcony.

His presence in Kabul and the killing have further strained relations between the Taliban and the West, particularly as Afghanistan's rulers seek an urgent infusion of cash to handle the catastrophic collapse of the economy that came after the U.S. withdrawal a year ago.

The Taliban had promised in the Doha Agreement not to harbor al-Qaida members or those seeking to attack the U.S. In the accord, the U.S. committed to withdraw its troops from Afghanistan and not to attack the Taliban.

On Tuesday, the Taliban's first statement on the strike only confirmed it had taken place, without mentioning al-Zawahri. In it, they condemned the strike as a "clear violation of ... the Doha Agreement."

In the new statement Thursday, the Taliban appeared to be trying to avert escalated tensions, particularly at a time when they and U.S. officials have been holding talks over $3.5 billion in Afghan assets frozen in the United States.

The Taliban said they ordered "the investigative and intelligence agencies to conduct serious and comprehensive investigations on various aspects of the mentioned event."

The statement also assured the West "there is no danger from the territory of Afghanistan to any country, including America."

Pakistan, which has lobbied the world to improve ties with the Taliban, said Thursday its airspace was not used for the strike that killed al-Zawahri. Although U.S. officials have not confirmed from where the drone with precision-guided Hellfire missiles was launched, there was speculation it used Pakistani territory.

"There is no evidence of this action having been undertaken using Pakistan's airspace," Foreign Ministry spokesman Asim Iftikhar said.

U.S. officials have said al-Zawahri had been staying for months at the Kabul home of a top aide to Sirajuddin Haqqani.

Haqqani is the top deputy of the Taliban movement's supreme leader, Mullah Haibatallah Akhundzada. He also serves as interior minister in the Taliban-run government and heads the Haqqani network, a powerful faction within the movement.

The Haqqani network is an Afghan Islamic insurgent group, built around the family of the same name. In the 1980s, it fought Soviet forces and over the past 20 years, it battled U.S.-led NATO troops and the former Afghanistan government. The U.S. government maintains a $10 million bounty on Sirajuddin Haqqani for attacks on American troops and Afghan civilians.

However, the Haqqanis also have opponents within the Taliban leadership, some of whom feel Sirajuddin Haqqani is amassing too much power. Haqqani's apparent sheltering of al-Zawahri could exacerbate frictions within the movement, though his power in the leadership leaves him nearly untouchable.

Regardless of who knew about al-Zawhari's presence in Afghanistan, the Taliban as a whole has never ended its longtime alliance with al-Qaida. The terror network has greatly diminished in manpower and strength the past decade, making it more reliant on allies like the Taliban.

Al-Qaida has enjoyed greater freedom in Afghanistan since the Taliban takeover, according to a July report to the U.N. Security Council by monitors of militant groups.

However, the monitors said it's unlikely al-Qaida will seek to mount direct attacks outside Afghanistan, "owing to a lack of capability and restraint on the part of the Taliban, as well as an unwillingness to jeopardize their recent gains" such as having a safe haven and improved resources.

Print Headline: Taliban claim they are unaware of al-Qaida leader in Afghanistan