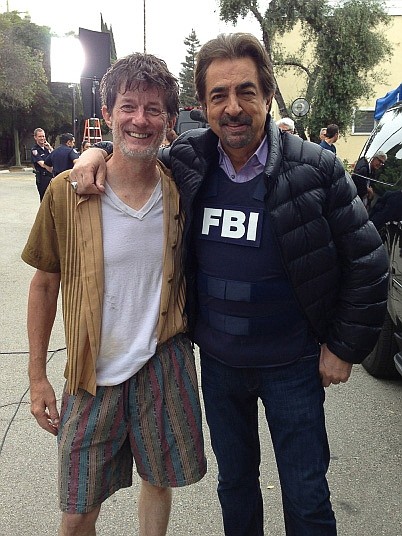 John Michael Herndon is seen on the set of Criminal Minds with star Joe Mantegna who directed the episode airing Wednesday on CBS.

John Michael Herndon, an actor with area ties, passed away recently, leaving behind a legacy in film and television.

Herndon was born in Linn and grew up in Jefferson City. He discovered acting in his youth.

He went to Lincoln University for two years before transferring to Missouri State University, where he received his master's degree in theatre. After this, Herndon did what all actors dream off -- moved to Los Angeles.

Herndon received his first acting role in the 1994 film "The Pamela Principle 2" -- although he would go uncredited for his performance.

This opened the door for Herndon to perform in larger films and series. His first role on a large production was during a season five episode of "Buffy the Vampire Slayer," in which he played a vampire.

Another big television show Herndon worked with was "Criminal Minds," in which he was featured in a 2013 episode of the program. He also had a role in 2016 with the long-running soap opera "The Young and the Restless."

Herndon starred in several shorts from 2001-11.

Herndon also participated in live theatre. He was cast as a lead character in two plays performed at Coger Theatre at Missouri State University. He performed a leading role in "School for Wives" at the Lincoln Theatre.

His life in Los Angeles wasn't always easy, as he came back to Missouri for a year to be with his sister, who passed away from terminal cancer in 2005.

This tragedy in his life reinvigorated his passion and purpose, which led to him getting even more roles.