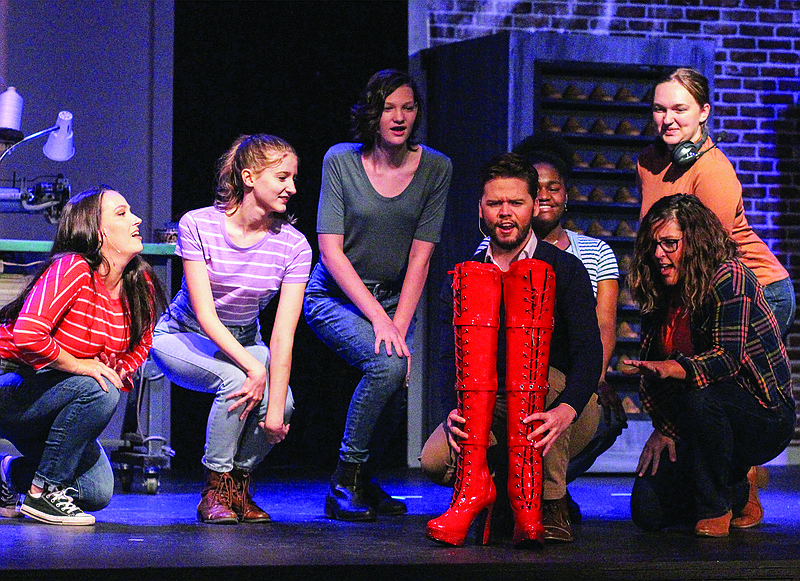 After a chance encounter in a London alley, Lola and Charlie become unlikely business partners, and begin the high-kicking journey that starts with a single "Step."

With Michael Brand directing the Cyndi Lauper-composed score, Sudduth and Campbell are thrilled to be part of a show they hoped to see on the CCP stage for years.

"I remember when I did my very first show with CCP ... I was talking to (CCP president) Nate (Grey), and asked, 'Can we do Kinky Boots?' He was like, 'Yes. Please.'" Campbell said. "That was five years ago, and now we've got it."

There to tackle the especially-challenging-in-heels choreography is lifelong dancer Barbara Mustoe, who described feeling "extra fortunate" to be part of Boots.

"I watch in amazement," she said of the vigorous dance moves.

On the first day of rehearsals -- when Mustoe instructed the dancers to dress to their comfort level -- each one stepped into a pair of stilettos.

"Wearing heels is not anything new to them," she said. "I look at choreography from the big picture of ... it fits the mood and it fits what's going on (in the musical). This one is high-energy and it's always moving."

To Sudduth, embodying Lola not only means displaying a wide range of talent, but capturing her many facets. For all of her larger-than-life confidence, she harbors a distinct vulnerability. While songs like "Land of Lola" and "Sex is in the Heel" leave audiences dancing in their seats, "Not My Father's Son" exemplifies the softer side of the seemingly-unflappable drag performer.

"A couple weeks ago, we sang through the whole show, and it was the first time I sang it in front of people," Sudduth said. "I barely kept it together. The emotions are just so raw in that song."

Charlie confronts his own internal conflict in the difficult scene that precedes "Soul of a Man." Holding the fate of Price & Son in his hands, his composure falters -- a reaction Campbell feels injects the story with authenticity.

"That scene kind of changes the tone of the show," he said. "I think we can all relate to that type of stress (response), when your emotions are running high and you say things you don't mean. It helps having those types of life experiences you can draw from, and then having someone like Curtis to react off of as well."

Growth is the name of the game in Boots. Lola's presence in the aggressively drab Price & Son factory not only challenges the status quo, but introduces a formerly non-existent zeal in its employees. While some character arcs are more pronounced than others, Sudduth is confident audiences will leave profoundly moved.

"It's very, very entertaining, and the message of the musical is poignant; it's uplifting. It's fresh and timely," he said.

Added Mustoe: "And there are so many different nuances. After you watch it, you sort of put it all together. It's just a very well-written production."

As for Campbell, whose character eventually slides into those fabulous stilettos, a bit more rehearsal is likely in store.

"I will be wearing the boots," he said, laughing. "I've got to practice walking in heels!"