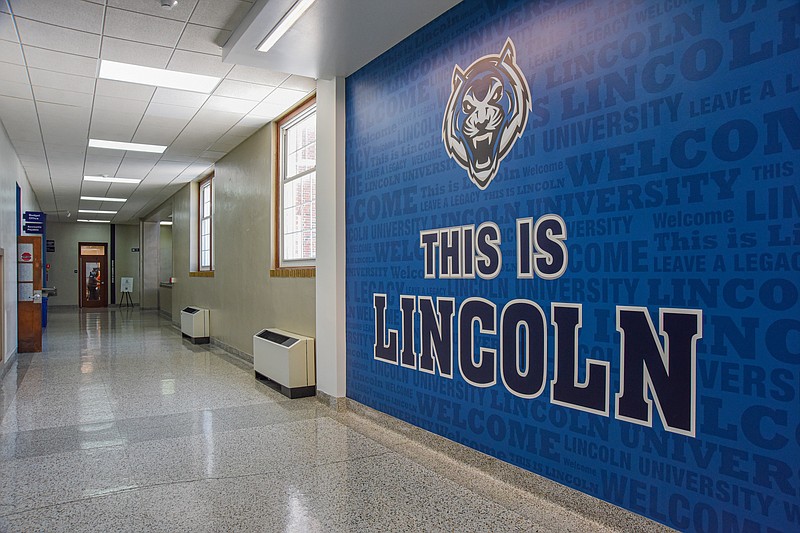 Soon the hallways in administration and classroom buildings at Lincoln University in Jefferson City will be filled with students, faculty and staff moving between classes and offices when the new school year gets underway. (Julie Smith/News Tribune photo)

A new housing partnership between Lincoln University and State Technical College of Missouri is a win-win, the institutions say.

Lincoln is in the process of bringing Tull Hall, one of its nine residence halls, back online to house Lincoln and State Tech students this fall. The two institutions are partnering under an agreement to be signed this week.

Tull Hall, remodeled in 2001 for $3.5 million, can house up to 88 students in its suite-style rooms. The hall hasn't been used for the past year because there haven't been enough students at Lincoln to need it.

Those extra beds are crucial for State Tech, though, which is running out of housing in Linn as record enrollment numbers outpace area development.

"I just think it was one of those things that kind of benefits both parties," said Brandon McElwain, a spokesman for State Tech. "We're able to get use out of the building and our students are able to find housing -- to find affordable and convenient housing. We thank Lincoln for allowing that to happen."

Jeremy Faulk, chief of staff at Lincoln, said it's an exciting partnership Lincoln can use to attract more students seeking a four-year degree.

"Them being a two-year technical school and us being a four-year university, it affords us the opportunity to potentially increase enrollment and serve as a feeder to individuals who want that associate's degree turned bachelor's," Faulk said.

He said the partnership will give State Tech students the ability to transfer their associate's degree to Lincoln to pursue a higher degree. The degree transfer opportunity only exists for State Tech students getting an associate of science in business, Faulk said, but Lincoln is open to exploring more ways to partner on academics.

McElwain said the number of State Tech students choosing to live on Lincoln's campus is growing daily. As of Monday, more than 24 students had signed up, all male.

Faulk said the partnership doesn't limit the number of State Tech students who can reside at Lincoln.

"It allows them the opportunity to feel like they're a part of LU by residing on campus -- their home away from home," he said.

State Tech students living at Lincoln will pay State Tech for room and board as usual, but Lincoln gets the housing revenue. State Tech will cut a check to Lincoln each semester for the full cost of each of the rooms its students use, paying Lincoln's standard rate for Tull Hall.

State Tech students will be responsible for providing their own transportation to class from Jefferson City, McElwain said.

"It's a win-win for our students because we are creating a living-learning community, it just happens to be about 20 minutes from our main campus," Bowser said.

State Tech students don't have to buy a meal plan for either institution, but Bowser said both institutions are opening up cafeterias to State Tech students and have one-meal-per-day plans that would be suitable for traveling between the two campuses. Individual meals can also be purchased as needed.

McElwain said housing in Linn isn't completely full, but getting there.

"A lot of the apartments are filling very, very quickly," he said. "We also have a partnership with the local hotel here in town to let students stay there -- it may be during the week -- at a discounted rate, so we're just trying to look at all options knowing that a sixth year of record enrollment is going to mean there's a squeeze on housing."

"It's a good problem to have," he added.

The memorandum of understanding the two institutions are signing provides State Tech housing for just the upcoming academic year. Bowser said the partnership could continue for as long as it makes sense for both institutions.

"If they can fill those residence halls, we understand and that would be a good thing for Lincoln," he said, adding State Tech is also open to future collaborations with the university.

McElwain said developers have committed to building a couple hundred more housing units in Linn by this time next year.

State Tech has 144 beds on its campus, McElwain said, meaning the remaining 1,850 or so students are considered commuters.

He said the college doesn't have readily available data on how many students currently commute to Linn from Jefferson City.

Faulk said Lincoln's focus on growing enrollment is moving the needle forward, but every institution is looking to grow the number of students it serves. Lincoln releases enrollment figures after its campus census a few weeks into the semester.

Bowser, who has been overseeing the partnership on State Tech's end, said it's been a positive experience throughout.

"They've kind of welcomed us with open arms," he said. "And we are excited about being able to serve our students and give them a place to live while they study at State Tech, and we think it'll be a great collegiate experience at Lincoln. We're excited!"