Church gymnasium intended for community use 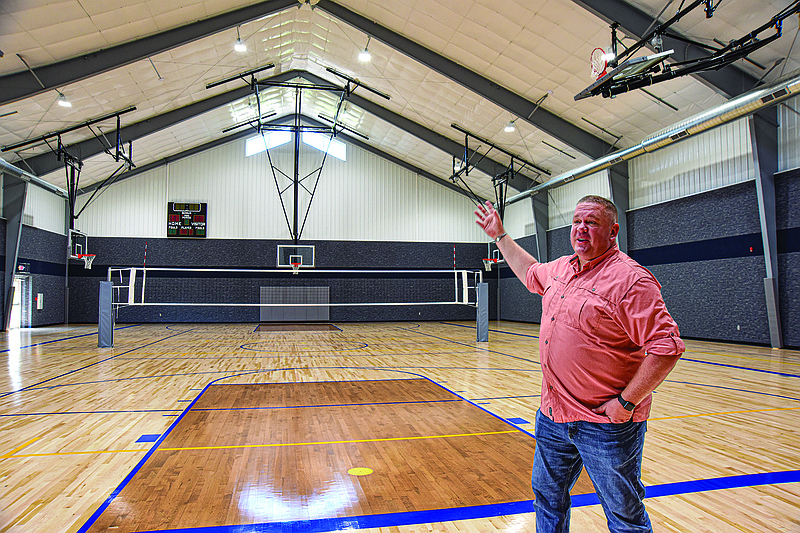 Randy Dignan, pastor of Bible Baptist Church in Apache Flats, is excited as he talks about details of the new gymnasium and activities he plans to hold in the gym. (Julie Smith/News Tribune photo)

God had a hand in the timing for Bible Baptist Church to build a new gymnasium.

When Randy Dignan in 1998 became pastor of the Jefferson City area church, located in the Apache Flats neighborhood at 4730 Country Club Drive, he arrived with ambitions.

"It wasn't the right timing. God wasn't willing to give the green light on that."

But jumping ahead, the church had grown and expanded quickly. In 2005, church members completed a two-year project to expand its main building by 20,000 square feet.

Meanwhile, the old auditorium portion on the south side of the church deteriorated.

"We always dreamed we'd go up the hill and build a gym," Dignan said. "That was the dream. That was the plan. There's a place up there."

A new gym on the north side of the church would have been separated from the church by the church's parking area. And it would not have been convenient to include classrooms and offices in the structure.

"But -- it's funny -- the old building got condemned," Dignan said. "The old auditorium got condemned because the trusses were failing."

Church leaders thought about demolishing the old part of the building and putting in a half-court gymnasium. But they finally gathered together after church one day to determine the future of the gymnasium.

"They said, 'Go big or go home.' They didn't think we had enough space, but it actually worked out," Dignan said. "Getting a new full-size gym on the site (required receiving) easement approvals. Everything worked out, and we actually built everything here."

Tim Clink, a church member, had been the general contractor on the new church building completed in 2005. And he built the new gym in which classes are scheduled to be held Sunday.

A wall separating the "old" building from the new structure features brick salvaged during demolition of the old auditorium.

The new gymnasium has room for roll-away bleachers along the side. It has six basketball goals (four of which may be used by dividing the gym in half for smaller courts). It has receivers in the floor for posts to hold volleyball nets. And it has hardwood floors.

"It's beautiful. Most Christian schools' gymnasiums don't have hardwood floors. When other churches come, they'll be really thrilled to see it," Dignan said.

An elevated scorers' area stands in one corner.

"The sound system is amazing," Dignan added. "We just had a big activity Sunday evening after services. We had a big pizza bar and open ice cream bar. And people came in and played volleyball and dodgeball."

The church also hosted a youth conference in April in the auditorium. About 300 teenagers from eight different states participated.

"We were able to use this for the first time," he said.

But because the office and classroom areas weren't completed, they were prevented from going downstairs.

Below the gymnasium are four offices, two conference rooms, an exercise room and 12 classrooms. One conference room acts as a youth center and can seat 25-30 youths.

One of the conference rooms may in the future act as a way station for police or sheriff's officers. It would act as a place where an officer could get out of his or her vehicle and get a cup of coffee, drinks or snacks. If they wanted to sit at a table and work on paperwork, they would be welcome.

"We don't have an elevator," Dignan said. "But you can actually enter every level of this building, except for the balcony, at a ground level."

The church continues to grow and grow, he said.

"Because we lost the old building, we've really been cramped for the last 15-16 months. We've had classes in -- almost like closets," he said. "My office was in a little closet."

The temporary status of offices and classrooms led to interruptions and inconvenience, he said. So staff and instructors are excited to begin using the new facilities.

The new auditorium, much like the rest of the church, is intended to be a community resource.

Go to https://www.bbcjc.com to learn more about services and Bible study times and days.

"This building belongs to the community," Dignan said. "It is our church's. But we want the community to come."

Organizers plan to host some basketball leagues, and maybe some indoor soccer leagues for small children.

Bible Baptist Church is a place children can come that is safe, he said. It will emphasize religious principles.

"We just want to tell people there is a church in town that cares for you," he said. "And this building is the community's building." 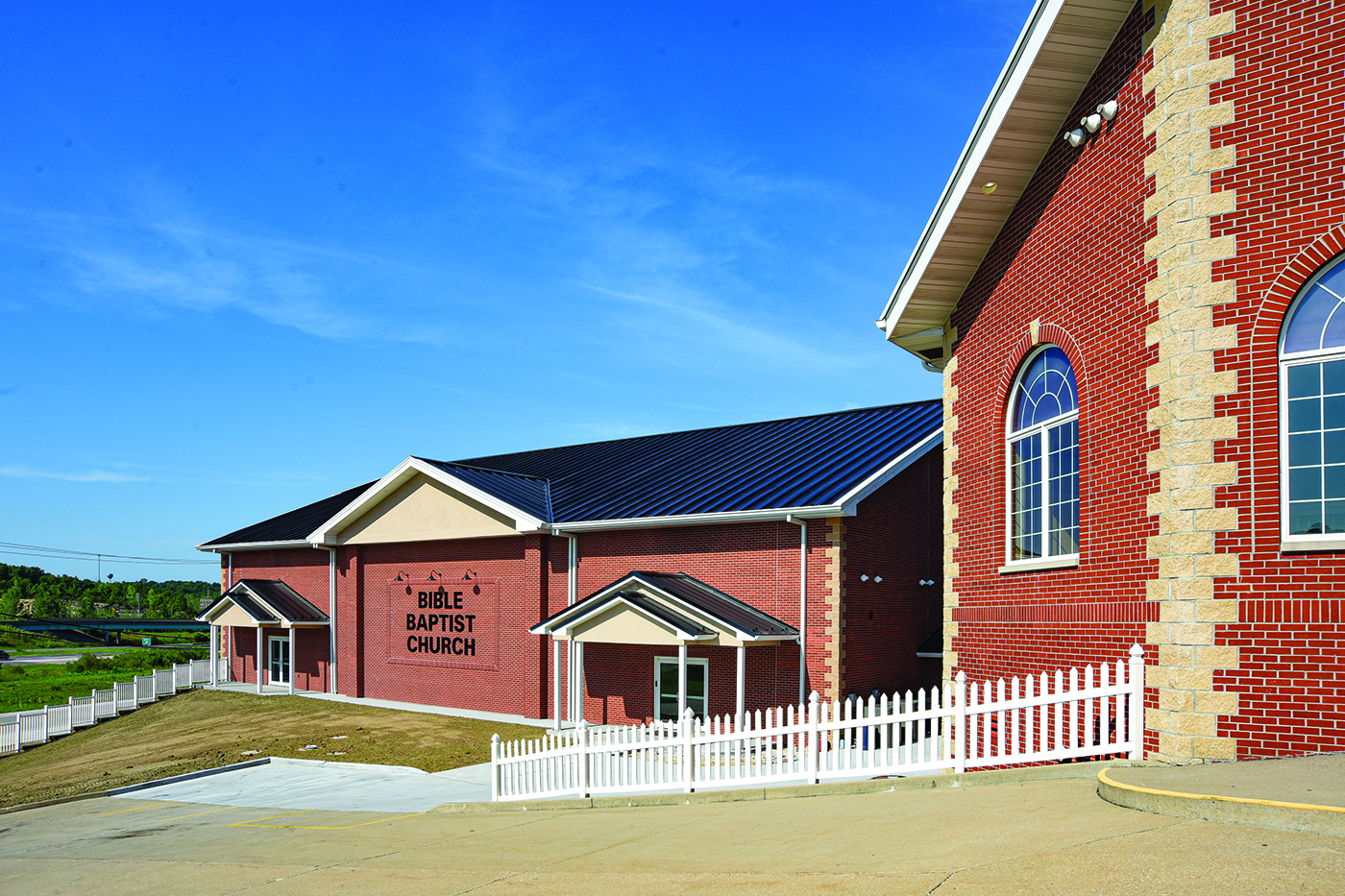 The new addition to Bible Baptist Church in Apache Flats, the building at left, flows seamlessly and matches closely the existing exterior of the previous addition. (Julie Smith/News Tribune photo) 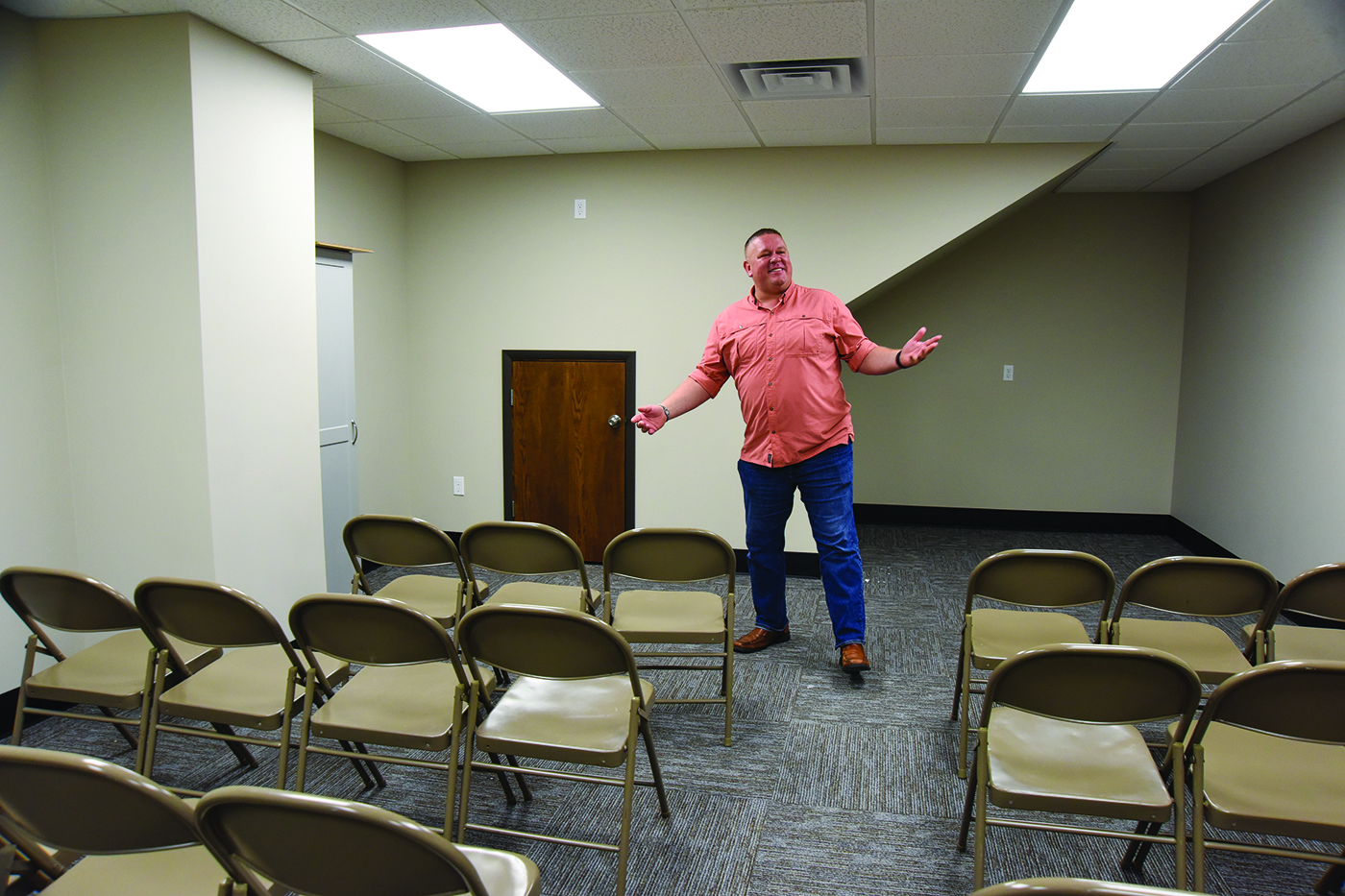