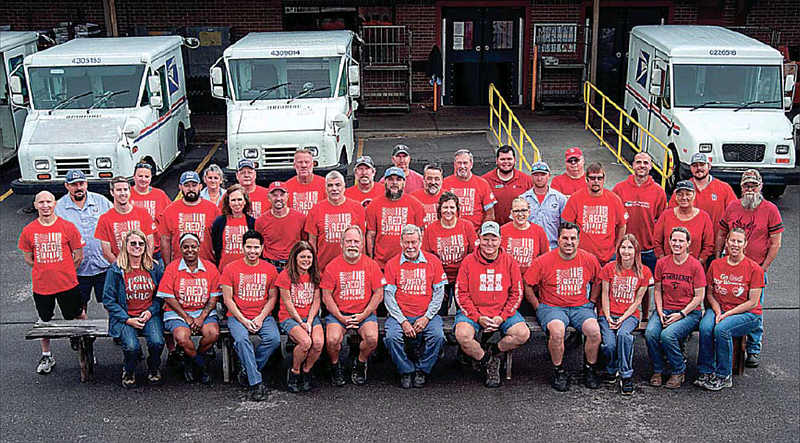 In a show of support for a fellow postal worker on active duty, many employees of the United States Post Office, Capitol View Station, wore matching shirts for Red Shirt Friday.

Staff at a Jefferson City branch of the post office gathered in solidarity of a co-worker who is deployed overseas.

Each wearing a red T-shirt emblazoned with Autumn Erwin's name, a couple dozen workers at the Capitol View Station, 1750 Jefferson St., huddled up Friday and got their photo captured for Erwin, who is deployed with her National Guard unit in Kuwait.

About 13 of the postal workers at the site are veterans. Some remain attached to Missouri and National Guard units. They've also received (and welcomed) the messages from home.

Dee Schubert said she also was deployed and received support through the Remember Everyone Deployed (RED or RED Friday) organization. The organization is intended to show solidarity for, and provide support to, veterans and deployed service members, according to remebereveryonedeployed.org. Its acts of kindness can have a positive effect on military members and lessen their stress, the site says.

RED Friday began at Camp LeJeune, a Marine Corps base in North Carolina.

Joe McGrail, a retired Marine who is also a co-worker for Erwin, said he received support from the program while he was in Iraq.

Co-worker Jennifer Rogers said Erwin is the first person she knows who has been deployed overseas. Rogers is aware of Erwin's children at home.

"I wanted to do something for her," Rogers said.