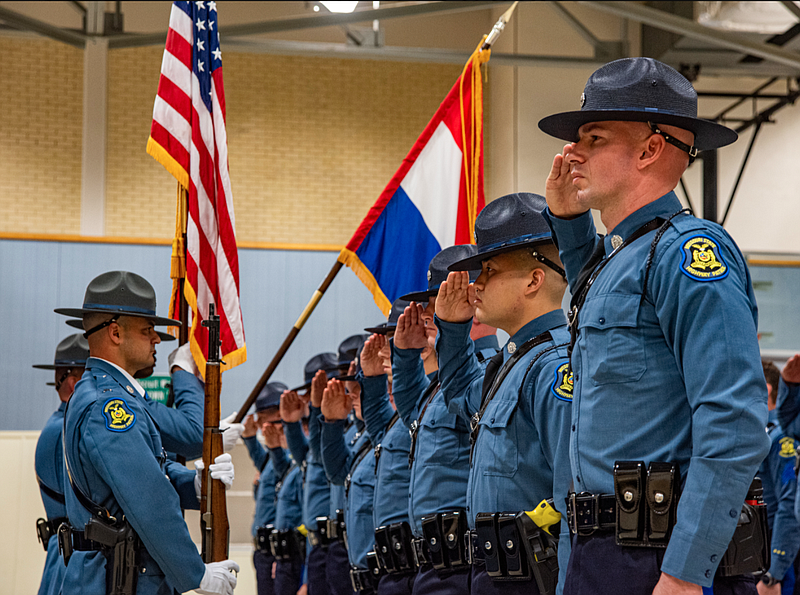 Recruits stand at attention Friday as members of the Missouri Highway Patrol Color Guard present colors at the opening of the 114th Recruit Class graduation ceremony at the Law Enforcement Academy.

The Missouri Highway Patrol graduated 10 officers from an accelerated training class Friday, a first in the agency's 91-year history.

The newest class of troopers received the same caliber of training in a shorter time period than most and are now ready to join their troops following Friday's graduation.

The Highway Patrol initiated a shortened training program in January in an effort to attract more troopers to the force. Instead of a 25-week training academy, the 10 newest troopers underwent a 15-week academy. The training was just as rigorous, said Joe Armistead, director of the patrol's training division.

Recruits were required to have at least three years of law enforcement experience to be accepted into the accelerated academy.

"Although the duration was shortened, these recruits still received some of the most intense and comprehensive law enforcement training in the nation," Armistead said. "This class was challenged to excel in all facets of training."

He said Highway Patrol instructors spent countless hours testing the new troopers' character and mental toughness, as well as instilling the values of the Highway Patrol.

"As with anything that is untested, we weren't exactly sure how it was going to turn out," Armistead said. "But I couldn't be more pleased with the results."

Of the 10 troopers who graduated Friday, four also received an associate's degree from Mineral Area College with credit earned through the academy.

Outstanding recruits in the areas of physical, firearm and academic training were recognized with awards during the ceremony.

Fox, who served as the recruit class commander, said the amount of work required in the shortened academy was sometimes overwhelming, but it was manageable. He said there aren't enough people signing up for law enforcement jobs right now as "common sense and decency have gone out the window."

"The accelerated program is a giant leap in the right direction for the Missouri State Highway Patrol," he said.

Fox will be joining Troop F, which serves Mid-Missouri, with three other new troopers. Troop F is gaining the most troopers from the first accelerated training class.

Lt. Gov. Mike Kehoe provided the keynote address for Friday's ceremony. He was joined by Sandy Karsten, director of the Department of Public Safety, and Justice Robin Ransom, the latest appointment to the Missouri Supreme Court.

In another first, Ransom administered the oath of office to the 10 new troopers.

"I'm a big fan of this new model that shows that when it comes to attracting dedicated men and women to protect our citizens, the patrol is looking at every viable option to accomplish that goal," Kehoe said.

Missourians look to the Highway Patrol for fairness and grace, Kehoe said, and expect law enforcement to be involved in the communities they serve.

Kehoe urged the new troopers to use their position and "profound influence" to be a friendly face and serve others, no matter who they are.