Chiefs-Chargers will be first Thursday game on Amazon 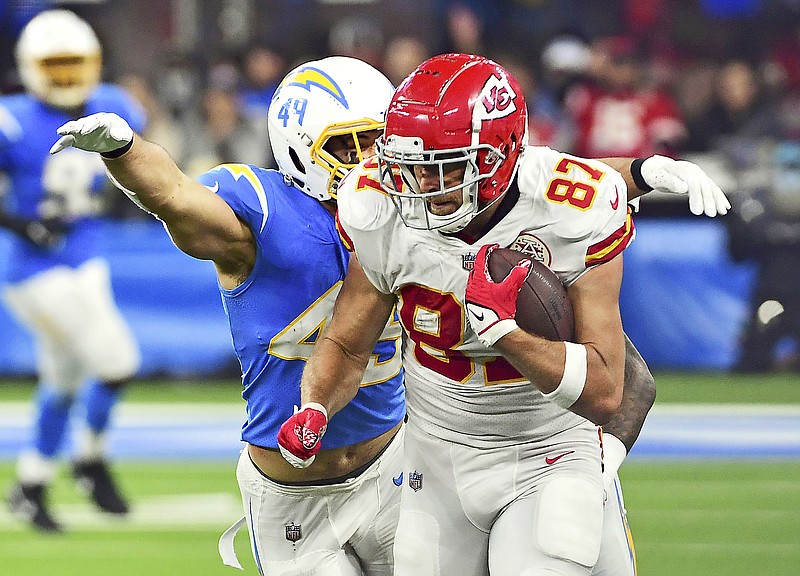 In this Dec. 16, 2021, file photo, Chiefs tight end Travis Kelce tries to avoid being tackled by Drue Tranquill of the Chargers after Kelce caught a pass for a first down during overtime of a game in Inglewood, Calif. (Associated Press)

The Week 2 matchup between AFC West rivals was announced Thursday during the first round of the NFL draft.

Amazon will pay $1 billion a season to carry the games for 11 years. Prime Video will carry 15 regular-season and one preseason game. They will be available on stations in the participating teams’ markets, which is the same practice when they are on ESPN and NFL Network.

NBC has the opening game of the season and also Thanksgiving night. The final week of the regular season has two games on Saturday and the remaining 14 on Sunday.

Al Michaels and Kirk Herbstreit will be the announcing team for the “Thursday Night Football” games. Michaels moves to Prime from NBC while Herbstreit will pull double duty. He will do NFL games for Prime and remain ESPN’s lead college football analyst.

The league announced last week the complete schedule will be released May 12. However, international games will be revealed May 4 with other notable matchups being announced the week of May 9.

This will be the fourth time in five seasons that the AFC West rivals have had one of their games in prime time. They met last year on Thursday night in Week 15 when Kansas City won 34-28 in overtime. They also had a Thursday night game in 2018 and a Monday night matchup in 2019 in Mexico City.

The Chiefs and Chargers have split their regular-season matchups the past two seasons. Last season, Kansas City (13-6) made its fourth straight trip to the AFC Championship Game before losing to Cincinnati in overtime. Los Angeles was 9-8, but missed the postseason for the third straight year after dropping three of its final four games, including the regular-season finale to the Las Vegas Raiders in overtime.

There could be other AFC West matchups in prime time when the complete schedule is announced. The division is loaded with star power at quarterback with Mahomes, Herbert, Las Vegas’ Derek Carr and Russell Wilson’s arrival in Denver.