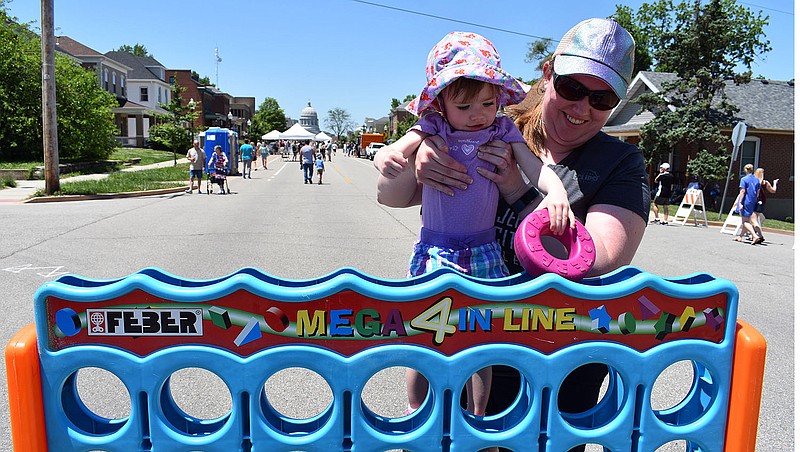 Jen Green holds up daughter Lilly, age 1 1/2, to drop discs in a game set up at the Porchfest on June 13, 2021, along Capitol Avenue in Jefferson City. (Gerry Tritz/News Tribune photo)

Porchfest is back Sunday for its spring edition -- but this time in a new neighborhood.

The cultural arts festival that typically graces the porches of Capitol Avenue each spring has moved to the Fairmount Boulevard neighborhood, allowing for more shade, more parking and more porches, according to Leann Porrello.

Porrello, the cultural arts specialist with the Jefferson City Parks, Recreation and Forestry Department, said Sunday's event, which runs from 1-4 p.m., is going to be the biggest yet with more than 40 artists across 14 porches on three connecting streets: Fairmount Boulevard, Fairmount Court and Oakwood Drive.

All three streets back up to McClung Park, and festival attendees are encouraged to park at McClung and enter the neighborhood through the park entrances. Live music will also be performed at McClung's indoor pavilion to greet attendees.

Porrello said festival organizers wanted the spring Porchfest to mimic the fall event, which is held in the Forest Hill neighborhood and has, what she called, a more organic and personal feel. That's partly to do with the trees.

When the 2019 tornado barreled down Capitol Avenue, numerous trees were lost, leaving the festival area with little shade, and the sun combined with the wideness of the street sometimes made walking through the event challenging.

Fairmount Boulevard may not be as wide as Capitol Avenue, but Porrello said that adds to the "quaint, comfortable vibe we want from a festival; it brings everything together."

With more porches than past events, Porrello said she's excited to see a wider variety of musicians and artists.

"We're finding a really good mixture of professional artists, artists that do it just for the love of it as a hobby as well as emerging artists that are using it to jumpstart their music career," she said. "It's really cool to see all walks of life join us."

Most porches have three musical acts planned by hour time slots throughout the afternoon, encompassing a variety of styles from acoustic to cover bands and even a harpist. Some porches also have a visual artist stationed in front giving demonstrations during the musical performances. A complete line up is available on the Porchfest JCMO Facebook page.

"This event would not be possible without the artists. ... We really encourage the community to not only come out and have a beautiful day walking around but bring cash for tips," Porrello said. "These artists donate their time for this event. They are doing it just for the love of what they do."

Despite it's name, Porchfest isn't just about the porches.

The centers of the streets will be filled with interactive activities including art demonstrations from visual artists, tie-dye stations and rock-painting crafts. There will also be a tree glamming activity, where participants can decorate a tree with beads to create a rainbow effect with the sunlight, as well as a community art project that, once completed Sunday, will be on display at various locations around the city.

A new activity, Porrello said, will be a take-a-compliment-leave-a-compliment envelope exchange in which participants can pull an envelope containing a compliment from a board and replace it with a new one they write.

"It's a great way for our community to engage with each other and spread some positivity throughout the day," she said. "So I'm excited to see the community talk to each other in a non-traditional way."

As always, Porchfest will also feature a slew of food trucks; new this year will be Crazy Fries and Eat Crepe Love.

And mark your calendars for the fall event, which is slated for Oct. 2 at Forest Hill. Like last year, the fall Porchfest will be at the same time as the MO Blues nonprofit's Blues in the Park event at nearby Memorial Park.

Porrello said connecting the two events was a bit of an accident last year, but because of the success, they are intentionally doing it again for the 2022 season.