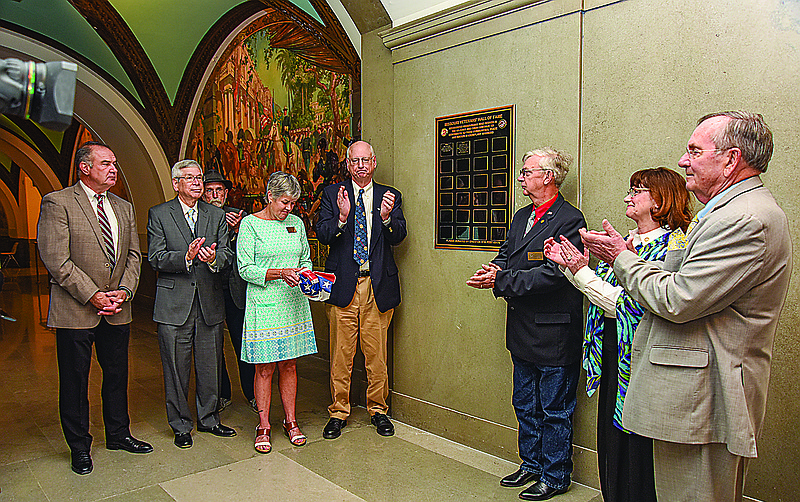 Just outside of the Missouri lieutenant governor's office on the state Capitol's second floor is the stretch of paintings known since 1919 as the Hall of Sailors and Soldiers. At the beginning of the hallway now is a plaque indicative indicating members of the the Missouri Veterans Hall of Fame. The plaque was unveiled Wednesday, April 27, 2022, during a brief ceremony hosted by Lt. Gov. Mike Kehoe, at left. He was joined by MVHOF board members and other interested parties. (Julie Smith/News Tribune photo)

JEFFERSON CITY, Mo. -- The Missouri Capitol has a new installation recognizing the dedication veterans have shown to the state and their communities.

The Missouri Veterans Hall of Fame is stationed in the second floor hallway directly across from the lieutenant governor's office. Since 1919, the stretch has been known as the Hall of Sailors and Soldiers.

Lt. Gov. Mike Kehoe was joined by veterans, state lawmakers and the Missouri Veterans Hall of Fame Board to unveil a plaque featuring the first two classes of inductees Wednesday morning.

"We looked for a lot of places for the plaque to be, but since this hall has been this hall for 103 years, we thought this would be the most appropriate because it has stood the test of time in honoring our state's heroes," Kehoe said.

"This is never going anywhere and neither is this hall," he continued. "It will memorialize our veterans for a long time."

The plaque, donated by Sikeston VFW Post 1374, has 10 names across two inducted classes and room for at least 22 more classes of inductees.

Harry S Truman, Missouri's only president, is among the names now hanging in the Capitol, as is John Gordon, an Air Force veteran from Jefferson City who served as a homeland security adviser.

James Tatum, an Army veteran from Pineville, is also in the Hall of Fame. After serving in the Korean War, Tatum co-authored legislation that created community colleges in Missouri and led a campaign to designate land for Crowder College in 1963.

Maj. Gen. Cassie Strom, a member of the MVHOF Board, said it's an honor to recognize Missouri veterans and have the plaque prominently displayed in the Capitol, where people often visit to learn about state history.

"It's an ideal place to get a lot of people to come and see, and then say, 'Oh, I didn't know that we had that,' and then go from there," she said.

The MVHOF started about three years ago, Strom said, and has inducted two classes.

Veterans inducted in the Hall of Fame have displayed a strong dedication to their communities, she said. To be considered, veterans can be nominated through the MVHOF's website and must have a connection to Missouri.

"The award is really for their commitment to the communities, state or nation, in essence, after their service," Strom said.

She said the MVHOF Board began its preliminary selection of the 2022 class Wednesday. The induction ceremony will take place in October at the Capitol.

Kehoe said he's heard from veterans for years about the need for a veterans Hall of Fame, and the group of veterans organizing around the board have done an excellent job.

"With 475,000-plus (veterans) in Missouri, it's a fitting way to honor the men and women who have paved the way to make us here, and we couldn't be more happy to be a small part of this," Kehoe said.

Rep. Dave Griffith, R-Jefferson City, chairs the House Veterans Committee and said it was a proud day for veterans across the state.

"There's so much history in this building and to have our veterans plaque and Veterans Hall of Fame here -- it's something that as our visitors come, they're going to see that and they're also going to be reminded of what veterans have done for our state," he said.

Griffith said it's important to shed light on the history of what veterans have done throughout history and instill those values in younger generations.