Chiefs have options with two first-round picks, 12 in all 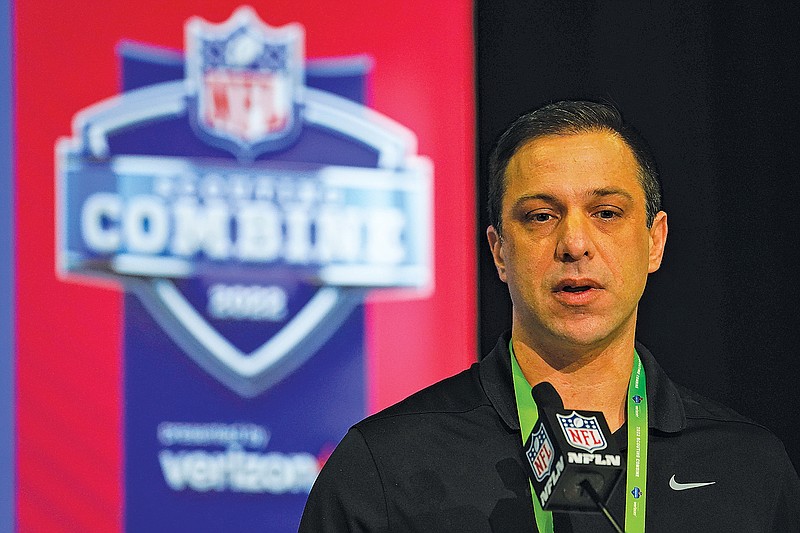 In this March 1 file photo, Chiefs general manager Brett Veach speaks during a press conference at the NFL Combine in Indianapolis. (Associated Press)

KANSAS CITY -- There are two very different schools of thought surrounding the Kansas City Chiefs as they head into the NFL Draft, where aggressive general manager Brett Veach has two picks in each of the first four rounds and 12 in all.

The first involves working the phones tonight to move up in the first round, perhaps packaging picks to climb the board and select a player they really want. If that’s the case, it’s likely to be one of the top wide receivers in the hopes he can help replace Tyreek Hill, the three-time All-Pro that was traded to the Dolphins this offseason.

The other thought process takes into consideration the whopping long-term contracts Kansas City has doled out to quarterback Patrick Mahomes, defensive tackle Chris Jones and several others. In that case, they would use all their draft capital to select a bunch of players that will be on inexpensive rookie contracts for the next several years.

“I think it’s all opportunity dependent,” Veach said. “I think we’ve shown over the years that if there’s a player or talent that we really like, and we think that there’s no alternative to match, we’ll look to (trade up).”

Veach won’t tip his hand, of course. But he has more picks than at any point since he replaced John Dorsey in 2017, shortly after Veach pounded the table to convince his predecessor to trade up and pick Mahomes with the 10th overall choice.

That means Veach has more latitude to do just about anything he wants during the course of the three-day draft.

“For sure, it’s certainly market-directed in what’s available and what’s realistic,” said Veach, who has had six picks each in every draft since taking over as GM. “It’s just case by case. You just kind of go through the exercise and just make the best decision for the organization.”

Last year, that involved trading a package of picks -- including the Chiefs’ first-round selection -- to the Ravens for left tackle Orlando Brown Jr., who played well last season and has since been given the franchise tag by Kansas City.

This year, it involved sending Hill to Miami for five draft picks, including first-, second- and fourth-rounders this year.

Former NFL GM Mark Dominik is in the camp that thinks the Chiefs will stand pat tonight, getting the best wide receiver available at No. 29 and addressing one of their other needs -- perhaps edge rusher or defensive back -- with the No. 30 selection. Or, Dominik thinks the Chiefs could trade down and acquire even more draft capital.

“I don’t think you have to go get a receiver unless you feel like this is one of those times where there’s only one guy you like. But I think there’s so many good ones that you’re going to be very comfortable to just kind of play it out and take your two picks,” Dominik said. “I think they’re going to be more like letting it come to them.”

• If the Chiefs want the closest player-for-player replacement for Hill, it could mean trading up to pick Alabama’s Jameson Williams, who is 10 weeks removed from an ACL injury. But there should be plenty of others available late in the first round: Treylon Burks of Arkansas, Skyy Moore of Western Michigan and Jahan Dotson of Penn State.

Kansas City has not picked a wide receiver in the first round since 2011, when Jonathan Baldwin turned out to be a bust.

• The Chiefs lost Charvarius Ward in free agency and could use someone with enough versatility to cover the slot. That is why they have been linked to Florida’s Kaiir Elam and Michigan’s Daxton Hill, a safety who plays like a cornerback.

• The Chiefs managed just 31 sacks last season, better than three other teams, and that’s a big reason why they felt compelled to keep defensive end Frank Clark despite his huge salary cap hit. With a deep draft of edge rushers, look for Kansas City to upgrade at that position. Possible targets include Penn State’s Arnold Ebiketie and Boye Mafe of Minnesota.

• Jones is the only defensive tackle signed through the 2023 season, so the Chiefs are likely to target the position in the second round or later. They are suddenly in a division featuring Russell Wilson in Denver along with Derek Carr in Las Vegas and Justin Herbert in Los Angeles, so getting pressure on the quarterback up the middle is becoming crucial.

• The Chiefs have hosted the past four AFC title games, so it’s not as if they have an abundance of holes to fill. And with 12 picks, they have the ability to invest in someone that may not help them right away. Keep an eye on Michigan pass rusher David Ojabo, who tore his Achilles tendon during his pro day last month. Ojabo was viewed as a top-20 talent, but the fact he could miss the entire upcoming season could make Kansas City a soft landing spot for him.

LAST SEASON: The Chiefs were 3-4 at the end of October before ripping off eight straight wins to help claim a record sixth consecutive AFC West title. After beating Pittsburgh and winning a thriller against Buffalo in overtime to begin the playoffs, the Chiefs lost to Cincinnati in their fourth consecutive trip to the AFC title game. Patrick Mahomes had another spectacular season under center, Travis Kelce broke more records at tight end and Tyreek Hill -- who has since been traded to Miami -- set the club record for yards receiving in a season. The defense struggled early in the year and again in the playoffs, though, and the biggest problem was a near-total inability to get pressure on opposing quarterbacks.

OUTLOOK: The Chiefs have extra draft capital for the first time since GM Brett Veach took over five years ago. Given he is among the most aggressive front-office execs in the NFL, look for Kansas City to package picks to move up or down based on who is available. One example would be trading up to snag Alabama WR Jameson Williams in the top 15, even though he’s expected to miss about half the season after tearing his ACL in the national championship game. The Chiefs also could use CB help after losing Ward to the 49ers in free agency. As it stands, Kansas City has 12 selections thanks to the picks acquired from the Dolphins in the Hill trade and a couple of compensatory selections.