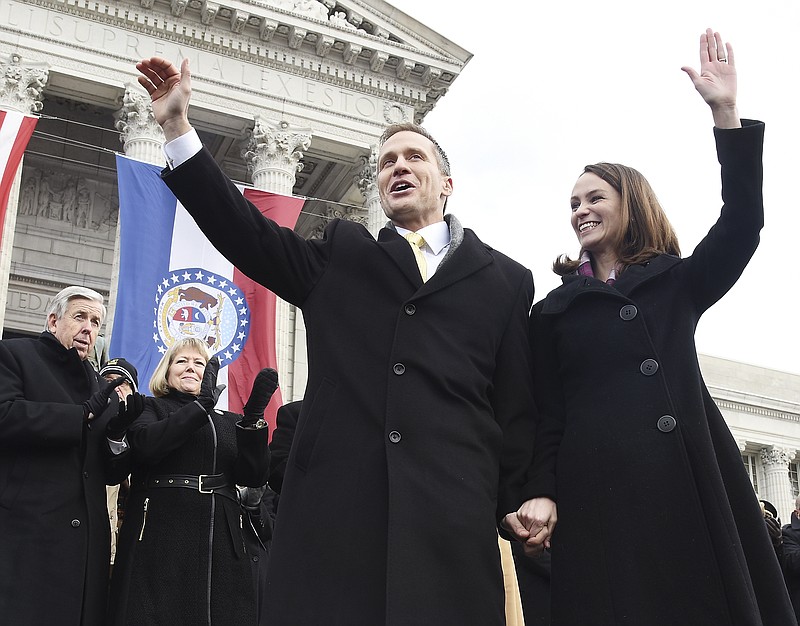 A Boone County judge will rule soon, perhaps by this week, whether former Missouri Gov. Eric Greitens will get access to his ex-wife Sheena Greitens' telephone records as he attempts to prove his political enemies are behind explosive allegations of spousal and child abuse.

Associate Circuit Judge Leslie Schneider said at the end of a hearing Tuesday she will not be able to issue a decision for a couple of days, but she would do it "as soon as possible."

Sheena Greitens, in a March 21 affidavit filed in the couple's ongoing child custody case, accused her former husband of striking her and taking her phone and car keys in April 2018 and striking one of their children in 2019, causing a tooth to become infected and later removed surgically.

The allegations came as Eric Greitens was leading the polls for the Republican nomination for U.S. Senate. In response, Eric Greitens has accused his ex-wife of colluding with his foes to release the affidavit to damage his campaign, calling the allegations lies.

The phone records have nothing to do with the underlying issue, Helen Wade, attorney for Sheena Greitens, told Schneider.

"The conspiracy theory that Mr. Greitens has concocted is just that – it's not real," Wade said.

Attorney Gary Stamper, however, said seeking the phone records was the fastest way to determine whether Sheena Greitens worked with political opponents to deliver the March 21 affidavit to the Associated Press minutes after it was filed.

"I am interested in knowing who was talking to who at or near the time of the leak in an effort to confirm a sad suspicion," Stamper said. "I hope I am wrong."

A hearing on that request is scheduled for May 27.

The two subpoenas at issue in Tuesday's hearing -- one sent to Verizon and one to AT&T -- sought 57 days of call logs and text messages for phones owned by Sheena Greitens, her sister Catherine Linkul, former Greitens campaign manager Austin Chambers and one number that has not been identified with a particular person.

"These records have nothing to do with the question of where this case should be ultimately litigated," Wade said.

The subpoenas also initially sought the phone records for former presidential adviser Karl Rove, but that request has been dropped after discussions with Rove's attorney, Stamper said.

Eric Greitens, a former Navy SEAL, was elected governor in 2016. He resigned June 1, 2018, amid allegations of violent sexual misconduct and an investigation of his campaign finances.

A Missouri House committee was considering whether to recommend his impeachment. As part of the deal for his resignation, a felony charge accusing him of stealing from a veterans charity was dropped.

During Tuesday's hearing, Wade told Schneider that Sheena Greitens speaks frequently to her sister and to Chambers, who she said is a close friend and who shares an apartment with her sister in Washington, D.C.

The only legitimate reason to see the phone records, Wade said, would be if Sheena Greitens denied something and Stamper wanted to prove she was lying. She has not denied speaking to Linkul and Chambers, Wade noted.

"This is a fishing expedition with a specific collateral purpose," Wade said. "It is overboard and it is for the purpose of harassment. It is for intimidation."

"If it's not there," Stamper said, "then my saddest suspicion is not true."

Both Chambers and Linkul were represented and their attorneys, Kurt Schaefer and David Niemeier, respectively, who both urged Schneider to quash the subpoenas.

"As intriguing as all this this is, it has nothing to do with Mr. Chambers," Schaefer said. "His phone records are collateral to this issue. We still believe that the subpoena for all his phone records, 57 days, is an abuse of process. There is no basis for it."