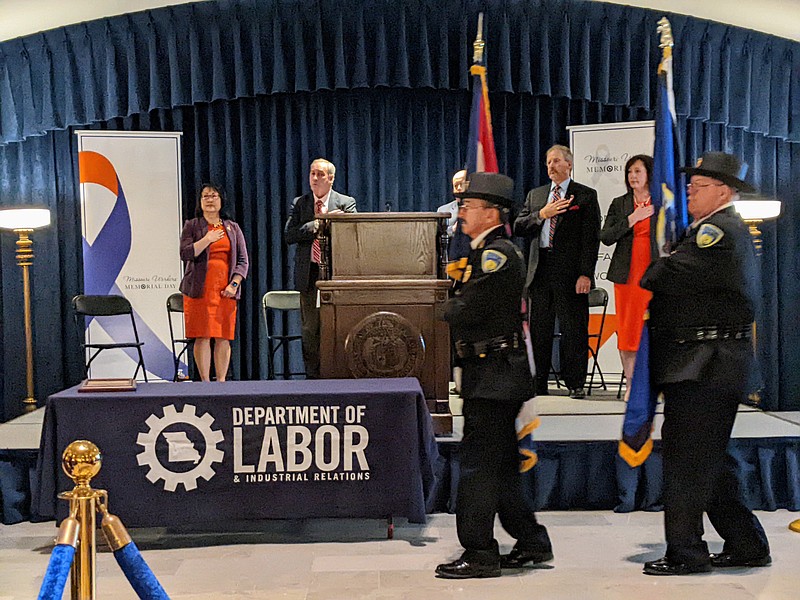 Members of the Missouri Department of Corrections Honor Guard presented and retired the colors during Monday's Missouri Workers' Memorial Day ceremony in the Capitol. The ceremony is held each year to honor Missouri employees killed on the job.

JEFFERSON CITY, Mo. -- The loss of a loved one is difficult, even for the state.

The Missouri Department of Labor and Industrial Relations honored Missouri workers killed while on the job with a memorial ceremony Monday in the Capitol.

The Missouri Workers' Memorial Day ceremony featured a proclamation from Gov. Mike Parson, a poetry reading, a performance by the Lincoln University choir and remarks from state workers.

The ceremony's program lists 115 names who were part of Missouri's workforce and died in 2021.

Angeline Stanislaus, chief medical director with the Missouri Department of Mental Health, said the past two years have been difficult with the amount of people lost to the COVID-19 pandemic.

Grief and mourning take time, Stanislaus said, and that's OK. It's not an event, but rather an individual process with no right answers. She suggested honoring and cherishing the relationship by lifting others up.

"Communities grow and bond when we share acts of kindness toward each other, and they die when we live isolated lives," Stanislaus said. "Let's experience the rest of 2022 as a new beginning and fill it with hope and resilience. Let's share our pain and experience growth in love and kindness."

The Workers' Memorial Day is an annual event the department hosts for loved ones of people who died from workplace injuries. Family and friends of those fallen workers were given a copy of Parson's proclamation, a dogwood tree seedling and an American flag that flew over the Capitol.

Parson said it's crucial for the state to respond with support after an employee is lost, and one of the best ways to heal is to remember the individual and what they did in his or her lifetime.

The governor spoke on his own experiences losing employees, colleagues and loved ones throughout his career.

As Polk County sheriff, Parson lost an officer in the line of duty, which he called one of the most difficult days in his career. The governor also lost a member of his cabinet last year when Carol Comer, the late director of the Missouri Department of Natural Resources, lost her battle with cancer.

"I'll be honest with you, I feel like I've been to too many funerals since I've been governor," Parson said. "But, I will also tell you this, I'm honored every time I go and I can represent the state of Missouri and be able to tell people how proud I am of the people that serve this state and give everything for it."

Anna Hui, director of the Department of Labor and Industrial Relations, said it's been several years since a Missouri governor has joined the Workers' Memorial event.

Monday's proclamation declares Thursday as Workers' Memorial Day and rededicates the state to improving safety and health conditions in every workplace throughout Missouri.

Daniel Stark, director of the Missouri Department of Labor Safety Program, said groups have organized events around Workers' Memorial Day since the 1980s to pay respect to fallen workers and recognize the impact their loss has on families, coworkers and communities.

"They were health care workers, construction workers, nurses, delivery truck drivers, farm workers, law enforcement officers, teachers, sanitation workers and many other occupations," he said. "We remember and honor every worker who has lost their life to injury or illness, and we commit ourselves to fighting for safety."

Stark said the department will continue to promote job hazards and how employees can eliminate them. 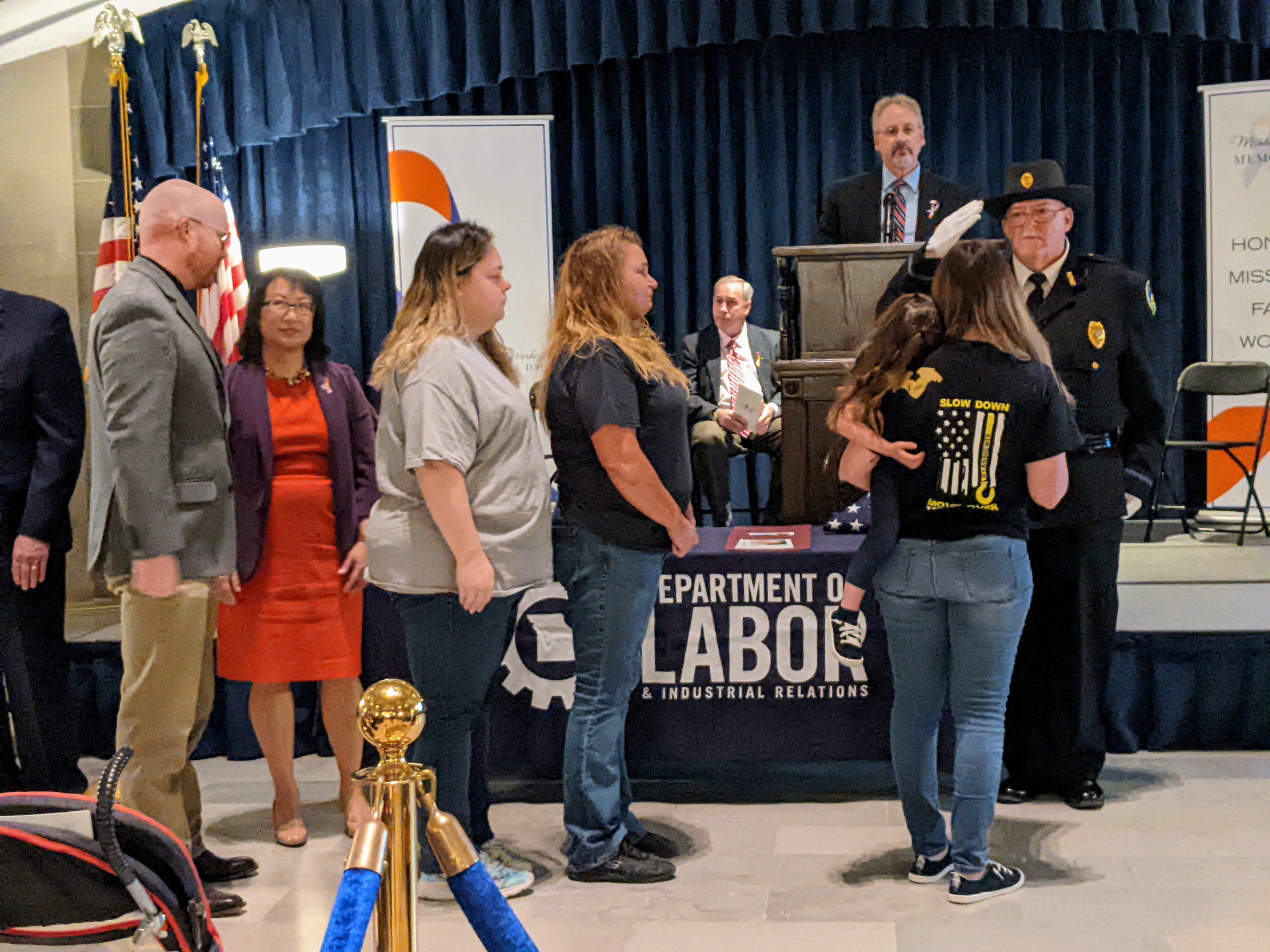 Joined by Rep. Travis Fitzwater, the family of Ryan Brewer accepts a copy of the governor's proclamation, a dogwood seedling and an American flag as part of Monday's ceremony. Brewer was a 25-year-old tow truck operator from Fulton who was killed last year after being struck by a vehicle along Interstate 70. 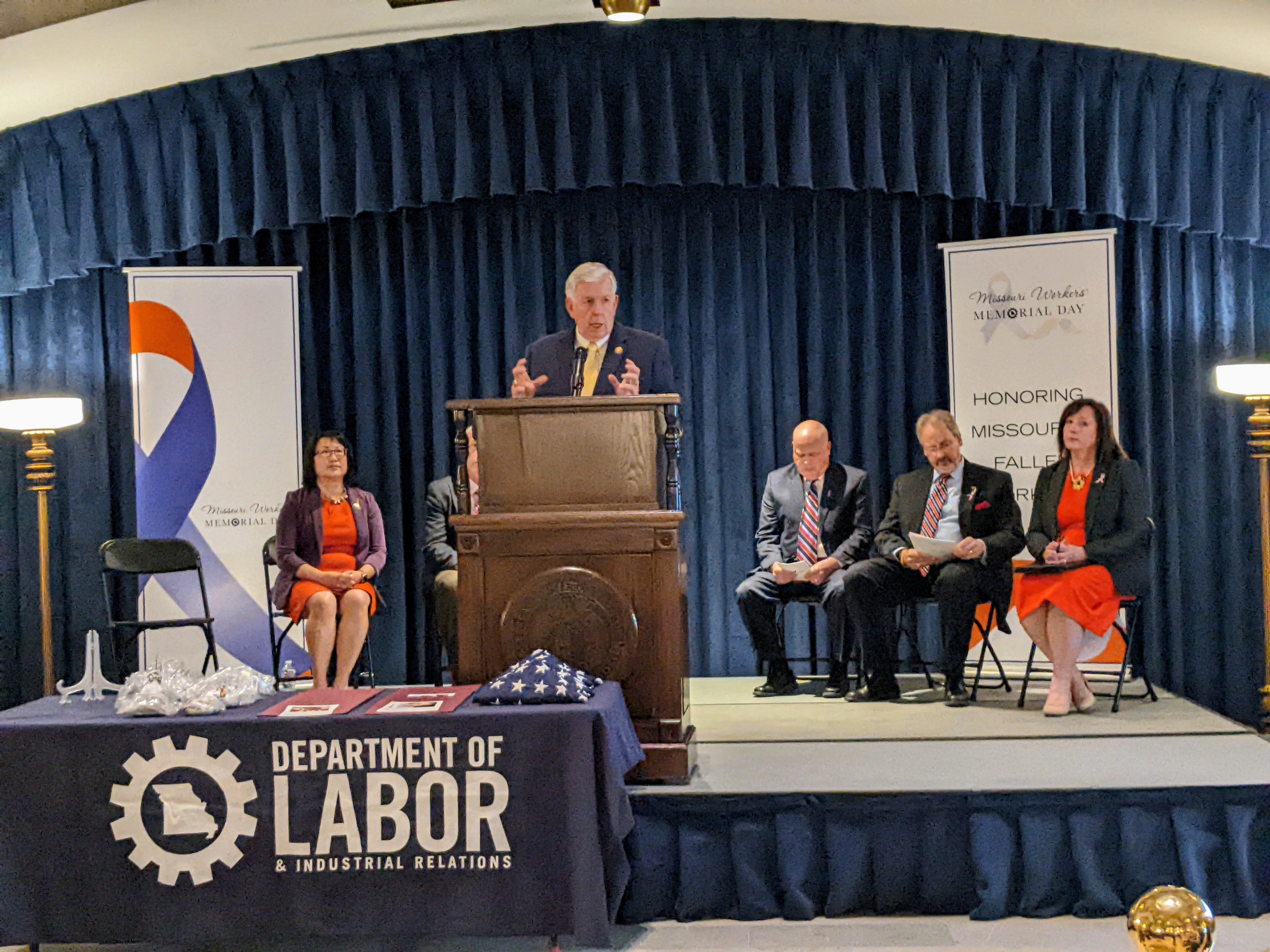 Gov. Mike Parson was the first Missouri governor in several years to join the Missouri Workers' Memorial Day event. Parson talked about his own experiences losing employees and what those experiences taught him about the dedication of public servants.