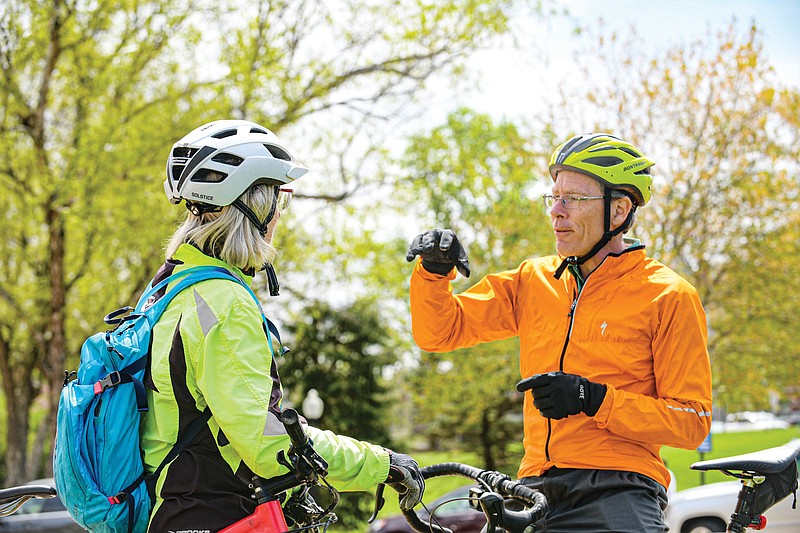 The annual Missouri Legislators Bicycle Ride is intended to be a fun way for lawmakers to get some exercise.

It's also a chance for bicycle riders to share their concerns with state leaders.

This year, the ride may have taken on more meaning.

Participants in the ride lobbied lawmakers to retain $70.7 million Gov. Mike Parson included in his proposed 2022-23 budget to develop the Rock Island Trail, when they met on the Capitol steps early Monday afternoon. Money would come from Missouri's portion of the American Rescue Plan Act.

Officials estimate it will take a total of about $100 million to fully develop the trail. But, Parson pitched the trail as a tourism and economic generator for the state -- and something he wants the state to invest in.

Before about 40 riders set out on a 6-mile loop from the Capitol to the Katy Trail trailhead in North Jefferson City, cycling enthusiasts and lawmakers shared their thoughts on the value of cycling tourism.

Brent Hugh, executive director of the Missouri Bicycle and Pedestrian Federation, said when the annual ride began (about 14 years ago), participants would have to drive to North Jefferson City, where they would set out on the Katy Trail. However, in early 2011, the Missouri Department of Transportation (MoDOT) completed work on the Pat Jones Pedestrian/Bicycle Lane (on the side of the Missouri River Bridge facing the Capitol) connecting the two sides of the river for non-motorized transportation.

Since then, the legislators' ride has left from the Capitol.

"It's amazing how many of the legislators don't realize you can do that," Hugh said. "They've never been on the Katy Trail."

The closest possible connector between the Rock Island and Katy trails would cross the bicycle lane in Jefferson City and hook up with a Rock Island trailhead in Eugene.

"The Rock Island Trail is our No. 1 priority on our agenda this year," Hugh said.

The General Assembly agreed two years ago, he said, to develop the Rock Island Trail State Park, but balked at spending a lot of state money. Legislators pushed for private money to be used for the park.

So, when the the governor earlier this year proposed using federal funds for the park, supporters were thrilled.

However, lawmakers have yet to approve next year's state budget.

And, some rural landowners whose property the Rock Island Railroad crosses want compensation for use of the railroad land. Landowners' easements only granted use of the property for operation of railroads, not for a recreational trail, they point out. Landowners have filed 358 cases regarding compensation in courts. Officials have dismissed 29 of the cases.

Riders preparing for the annual legislators' ride Monday said federal money would help trail developers to overcome the most challenging parts of the trail's construction -- three tunnels and two bridges -- mostly on the east end of the Rock Island Trail, Hugh said.

Caryn Giarratano, who was once the state bicycle and pedestrian coordinator for MoDOT and who is a founding member of the Missouri Bicycle and Pedestrian Federation, said the Katy Trail has been a "huge economic" boon to the state of Missouri. People from all over the world come to Missouri to ride the Katy Trail, she said.

It brings money to Jefferson City, she said. And, if the state were to connect the two trails, the most likely place for that to occur would be in Jefferson City, where the Pat Jones Pedestrian/Bicycle Lane allows easy and safe crossing of the Missouri River.

Additionally, Giarratano said, anytime people can see cycling as a viable mode of transportation, it's a good thing.

"When bicyclists are on the road, roads are safer. Because motorists start looking for bicyclists and they slow down," Giarratano said.

It works with planning partners and local communities to identify, plan for and construct projects. As part of the President Joe Biden administration's response to the COVID-19 pandemic, the administration pushed the Infrastructure Investment and Jobs Act (IIJA). The act is intended to modernize roads, bridges, transit, rail, ports, airports, broadband, drinking water and wastewater infrastructures.

"(IIJA) includes some new funding and grants programs for non-motorized transportation, such as safe streets and roads for all, strengthening mobility and revolutionizing transportation," Kleinschmit said.

"The Rock Island Trail goes right through a large portion of the area I represent," Haley said. "The Legislature has many supporters of our bicycle and recreational trails. We're just hoping we can come through with some funding. The exciting part is the Rock Island Trail will be completed. It's just a matter of will proper funding be there to get it done in a timely manner? Or, will it take a few more years than we're hoping it might take?"