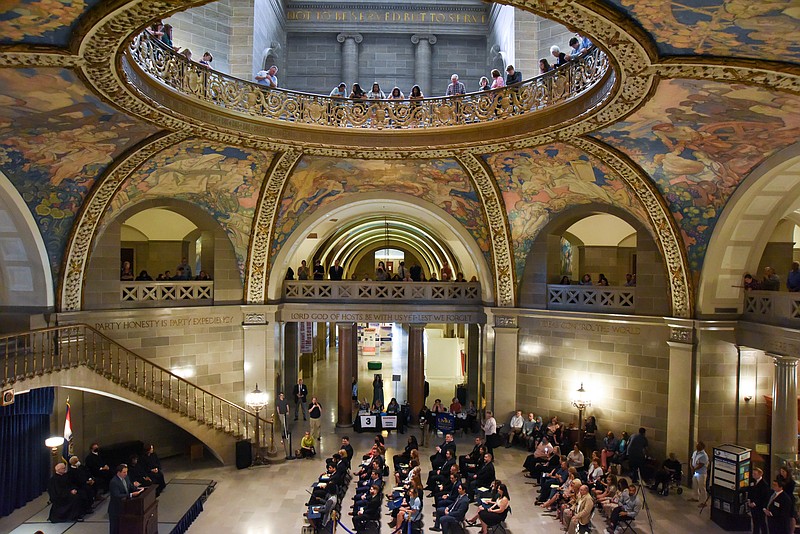 Julie Smith/News Tribune Friends and family lined the second and third floor rotunda railing as their loved ones prepared to take the oath as an attorney during a Capitol ceremony Friday.

Missouri judges officially welcomed a new class of lawyers to "the adventure of a lifetime" and the Missouri Bar during a Friday ceremony at the State Capitol.

Families and friends filled the upper floors of the Capitol Rotunda during the enrollment ceremony, which was held to administer the Oath of Admission, award licenses and welcome attorneys who passed the Bar exam in February to their new career. Roughly 140 students passed the bar exam in February.

Judge Mike Gardner, vice president of the Missouri Board of Law Examiners, congratulated the latest class of lawyers and urged them to use their profession to help people before making a motion to admit them into the Missouri Bar.

John Grimm, president of the Missouri Bar, seconded the motion after sharing the great rewards of working in law, which he said come from helping others.

"That's what we do as lawyers," Grimm said. "We help people. We solve problems. And the best lawyers, in my view, are those who help people to solve problems while maintaining the professionalism and civility that you ... will pledge to honor."

Benjamin Arnold, a 26-year-old criminal defense attorney based in Kansas City, said the enrollment ceremony was a great honor after a difficult road to get there.

Arnold said he's wanted to be an attorney since he was 6 years old and began watching legal TV shows while home sick from school.

Arnold attended the University of Missouri-Kansas City's law school on a scholarship and graduated a semester early. Most coursework has taken place online amid the COVID-19 pandemic, he said.

The first attorney in his family, Arnold opened his own practice in Kansas City with the website kcdui.com.

"It's always been a dream of mine," he said.

Mischa Buford Epps, executive director of the Missouri Bar, said it's always an exciting time to welcome new members to the profession and send them off to start their legal journey.

Epps said the enrollment ceremony really helps students recognize the accomplishment of completing a law degree and becoming an attorney.

"I know that they have great ideas and ambitions and goals, and the Bar wants to play a role in helping them meet those objectives and accomplish those goals and really be a partner in that process," she said.

Gary Lynch, chief judge of the Southern District of the Missouri Court of Appeals, urged the new lawyers to meet expectations of civility and the challenge of moral responsibility every day.

"To be proud to be a Missouri lawyer means that today I'm going to be mindful of the words I use, I'm going to strive to the best of my ability to uphold the ethics of the legal profession and to demonstrate civility in all I do," Lynch said.

"If you do that every day, you're going to build a career that you're not only proud of, but that helps so many people along the way," he continued.

Kaustubh Udipi and Joshua Saleem, who were both admitted to the Missouri Bar on Friday, said they were relieved to be at the enrollment ceremony.

Saleem took part in Saint Louis University's part-time, night program and graduated from the law school after four years. He went back to school after working in nonprofits to support young adults for the past 10 years.

Saleem said he wanted to do more to advocate for people who are marginalized in society and take the fight to the legal realm. He said it's been a dream since he was in elementary school learning about the civil rights movement and the impact Thurgood Marshall had on the progress of Black Americans.

Udipi graduated from a full-time law program at the University of Alabama after three years.

"Initially, I was thinking about joining a more progressive prosecutors office, but I did that and I became very disillusioned with it," Udipi said. "A lot of the stuff that they were saying was progressive really didn't make a difference in the end or maybe helped a few people, but if I want a more systemic change to happen then I want to be on the side that's actually going to be litigating."

Udipi works for the Missouri State Public Defender's Office in Clayton, Missouri, and Saleem will be joining the same office in June.

Grimm encouraged the new lawyers to get involved in their communities.

"You have the knowledge, the understanding and the critical thinking to do so much good in your communities, whether it's on a church board, a school board, city council or some other non-profit," he said. "You have a great opportunity to make a difference." 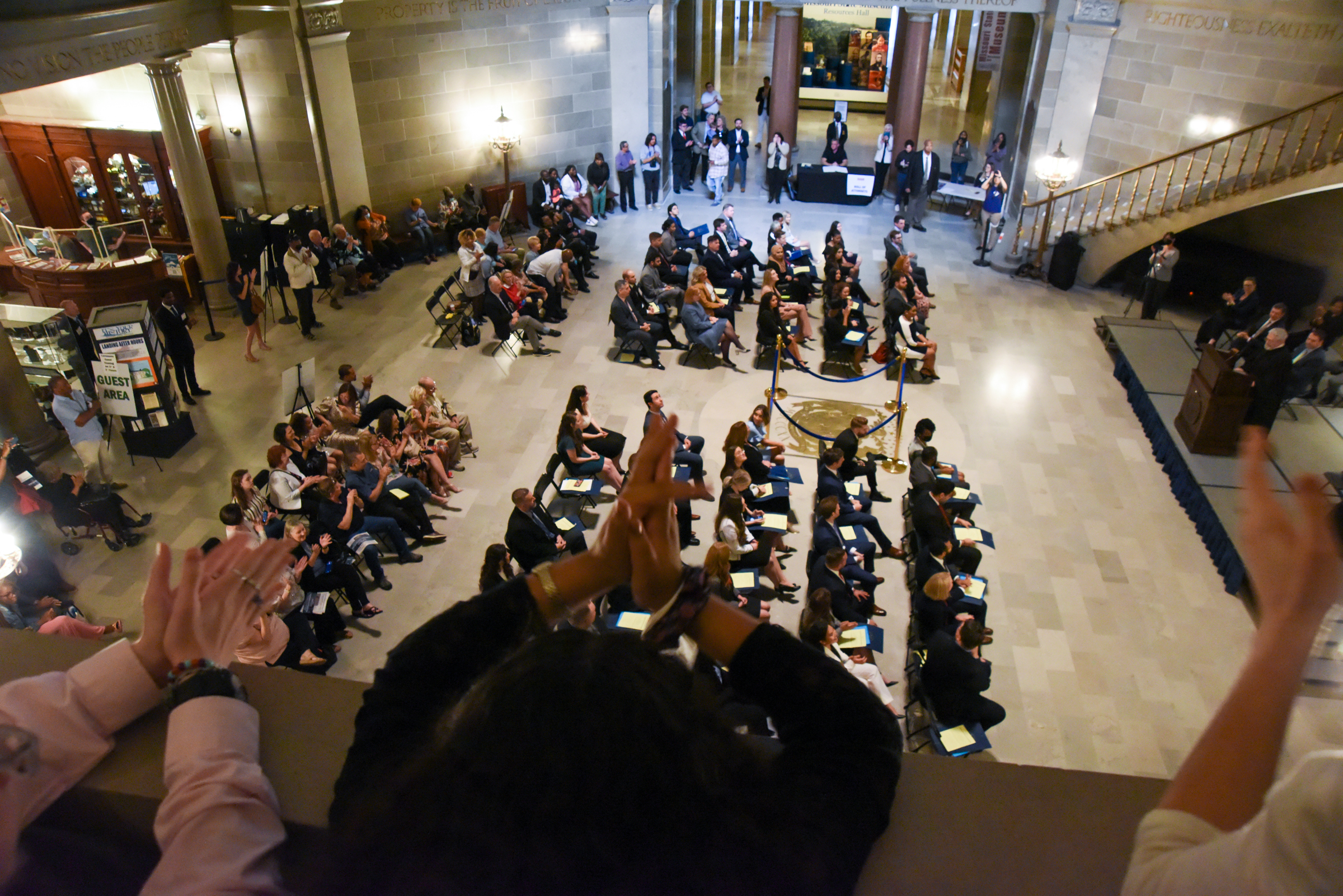 Julie Smith/News Tribune Family and friends of the new lawyers just sworn in applaud for their loved one near the conclusion of Friday's swearing-in ceremony in the Capitol Rotunda. Nearly 80 attorneys joined the roll as Missouri attorneys able to now legally practice law in the state. 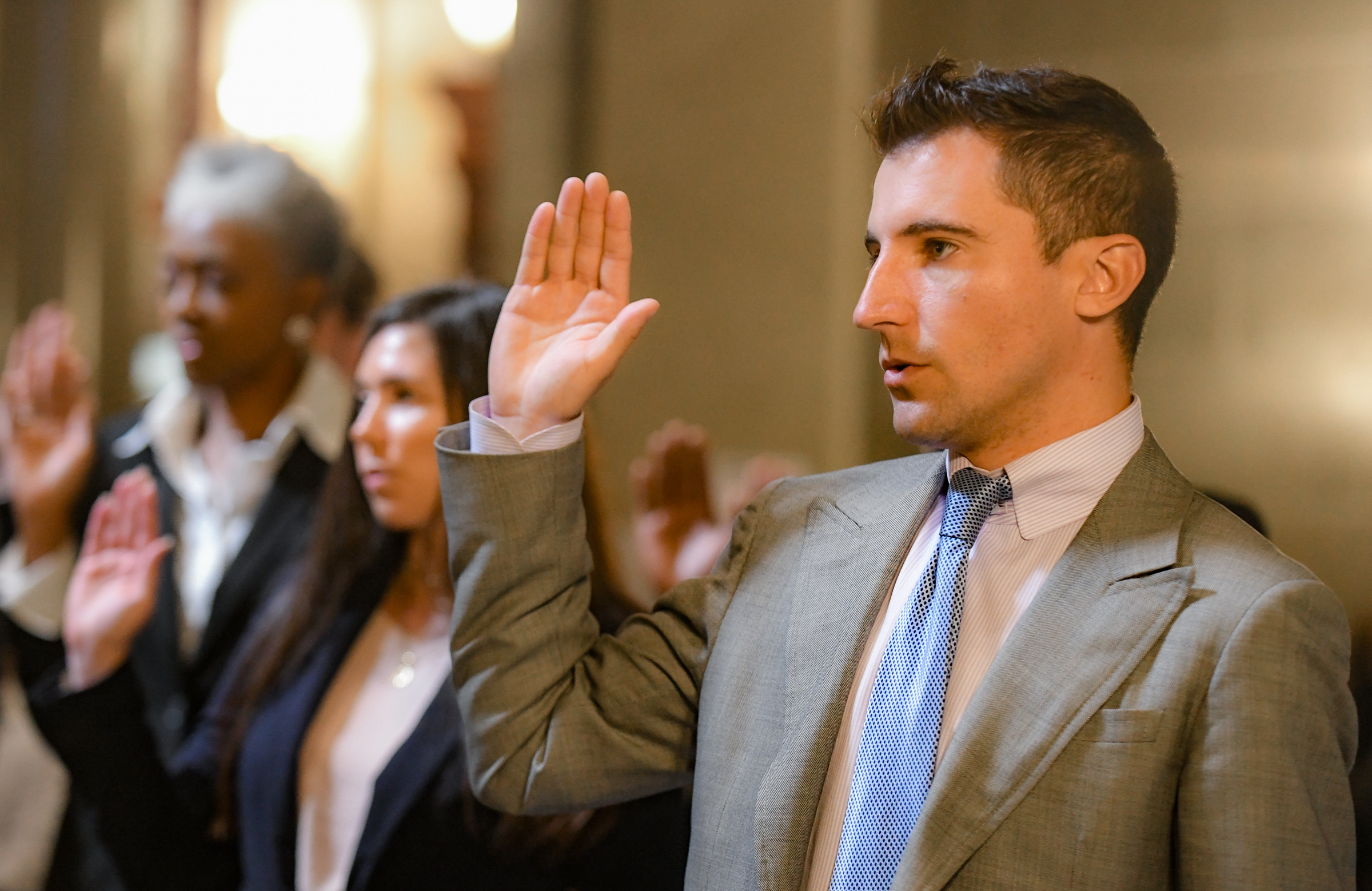 Julie Smith/News Tribune Benjamin Arnold raised his hand and repeated the oath of a new attorney during Friday's swearing in the Capitol Rotunda. While family and friends gathered around the periphery of the recent law school graduates and the railing of the second and third floor rotundas to celebrate with their newly admitted bar member. Arnold is a graduate of the University of MIssouri Kansas City and will work and live in the Kansas CIty area where he grew up. 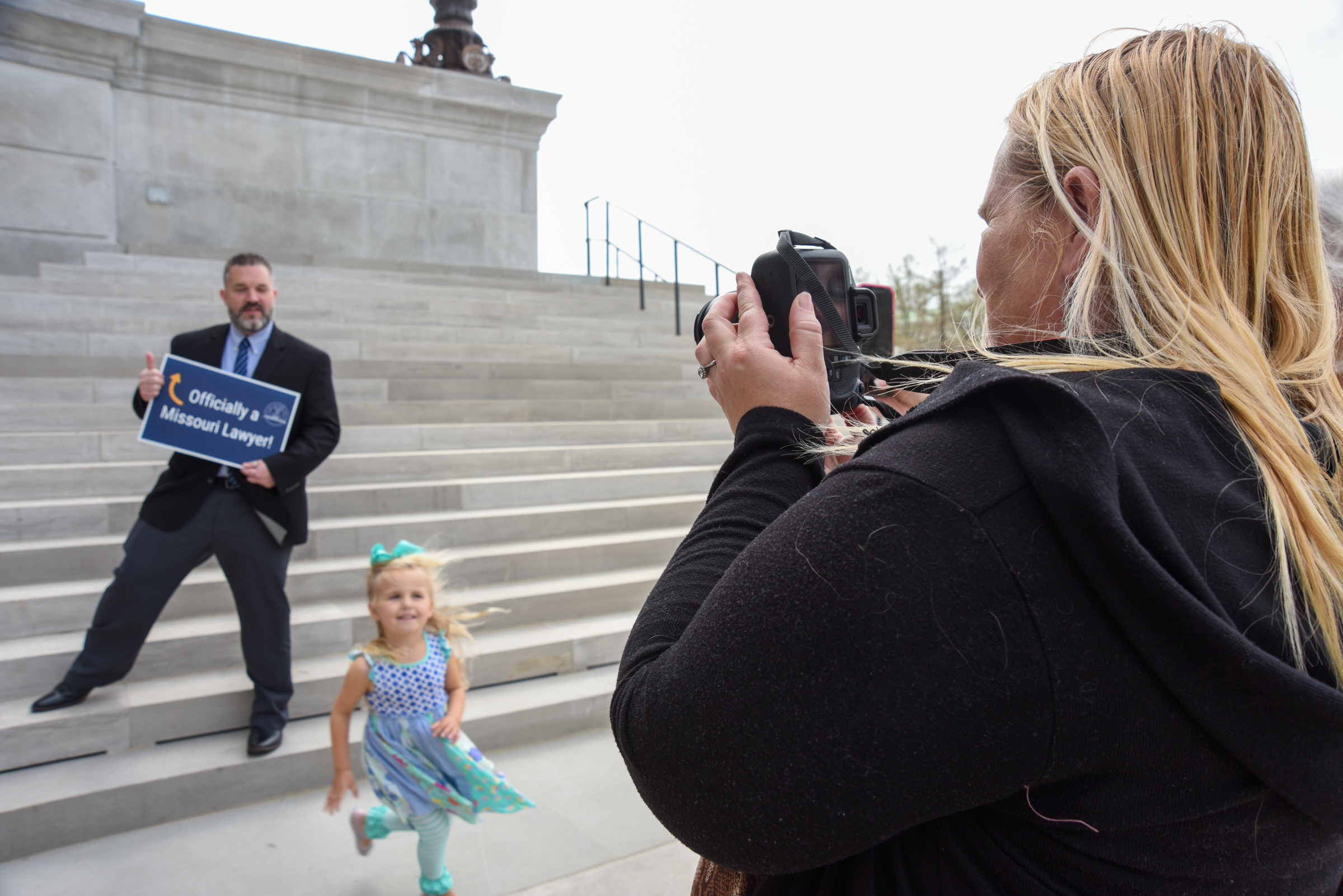 Julie Smith/News Tribune While his little sister Pressly Hurney, 4, runs through the scene, his other sister Kristy Sicard, right, takes pictures of Mike Hurney after he was sworn in as an attorney Friday. The Missouri Bar hosted a ceremony in the Capitol for 77 new attorneys who were added to the roll of Missouri attorneys. Sicard, who lives in Lebanon, made the trip to support her brother who lives in Kimberling City.