An estimated 1,500 people participated in the 2022 Midwest March for Life that started on the Capitol’s south lawn, circled around the north drive on Capitol Avenue to Madison Street, then continued west on High Street back to the Capitol. About midway through the march, rain began falling, getting heavier by the moment as marchers concluded the trek. (Julie Smith/News Tribune)

"Give us strength today, Father," Nelson prayed to kick off the Midwest March for Life, "as we do your work today, as we continue to live and reflect your being."

He prayed that the crowd, which swelled to about 2,000 before it marched down Capitol Avenue, would be a blessing to the Capitol and the men and women working within.

But supporters have to do more than just knock on lawmakers' doors or stand up and demand they change laws.

Until people do that, the "scourge" that has been on the nation for 50 years will continue, he said.

Nelson, pastor of SOMA Community Church in Jefferson City, said he is the first Black president of the Missouri Baptist Convention, after 187 years.

As such, he represents about 1,800 churches around the state. They stand with and fight alongside those attending the march Wednesday, he said.

"Don't get twisted. Don't get mistaken here. Don't get off because we listen to conservative or liberal, or whatever radio or whatever you want to watch. I don't care," Nelson said and held up his Bible. "This is the armor that we stand behind -- is God's word."

He pleaded that listeners raise their energy, voices, minds and prayers -- and stand for those who cannot stand for themselves.

He was the first of more than a dozen speakers during the event's rallies -- one had been scheduled before and one after the march -- which were moved inside the Capitol because of the morning's rain.

Because they didn't want to cause listeners to have to go through Capitol security twice, organizers decided to hold the rallies back-to-back inside the Capitol Rotunda and march afterward.

As part of the event, Bridget VanMeans, president of St. Louis ThriVe, which provides expectant mothers with ultrasounds, counseling and other services, recognized Rep. Mary Elizabeth Coleman, R-Arnold, with a Patriot for Life Award.

VanMeans implored listeners to share their stories. Each of them, she said, has a story that focuses on the moment they realized unborn life deserved to be protected.

"Share that story. Your story cannot be argued with," she said.

It is probable, she said, the U.S. Supreme Court will announce it has overturned Roe v. Wade sometime in late June.

"Here is where you come in. Most of you do not know that justices can change their minds between now and almost the announcement of their decision," she said. "That's very exciting. And it's also ominous."

It's essential, she said, for the movement to make its voice heard.

We have waited a long time for the U.S. Supreme Court to take another look at its 1973 decision, said The Most Rev. W. Shawn McKnight, bishop of the Diocese of Jefferson City.

"(We waited) for the court to acknowledge finally the fallacies underlying the logic of abortion and uphold the constitutional right to life for all human beings, no matter how small, no matter how young," McKnight said. "We have suffered as a nation in the wake of this landmark decision, as it has eroded the culture of life in our society and rejected the many blessings the choice for life secures for us as a people."

The 1973 decision deceived many about the curse of abortion, he said. And it qualified the value and dignity of human life.

"The horrific and cruel destruction of little 'somebodies' cries out to heaven and brings with it the curse of the breakdown of our social bonds," McKnight said. "It is never good, never just, never charitable, never life-giving to treat an innocent human being as something to be discarded and thrown away."

As a people, we must stand up for the weakest among us, he continued, to give hope and a helping hand to women tempted or coerced into choosing abortion.

As a reward, students from the school led the March for Life, which snaked from around the Capitol, eastbound on Capitol Avenue, then south on Madison Street to High Street. From there, the march returned to the Capitol.

A seventh-grader, Cameron Reinsch, said students at the school are strongly connected to pro-life issues. Students are right now doing a baby bottle campaign to raise money for ultrasounds, she said.

"So when women who are thinking of getting an abortion see their baby, they don't want to get it anymore," Reinsch said.

Within the campaign, she said, students raise money and fill a baby bottle. Money is then given to pregnancy centers to pay for ultrasounds.

One of the fifth-grade students turned in a $100 bill, she said.

Having been a student at St. Joseph from kindergarten through eighth grade, Kaylee Juergensmeyer said she's learned a lot about the Catholic faith.

"St. Joe's a really good Catholic school, and it's taught me a lot about my faith," Juergensmeyer said. "For the pro-life (rally), I've learned a lot of women don't give their child the choice to have its life."

It seemed unfair, she said, because the parent had that right. She said she is reminded of a quote, by whom she was uncertain, in which someone said every person who is pro-choice had the opportunity to be born. Yet they are not giving that opportunity to another baby.

"I feel like that is a really true thing," she said.

In the accompanying video, pro-life advocates participate in the annual Midwest March for Life Wednesday in Jefferson City. 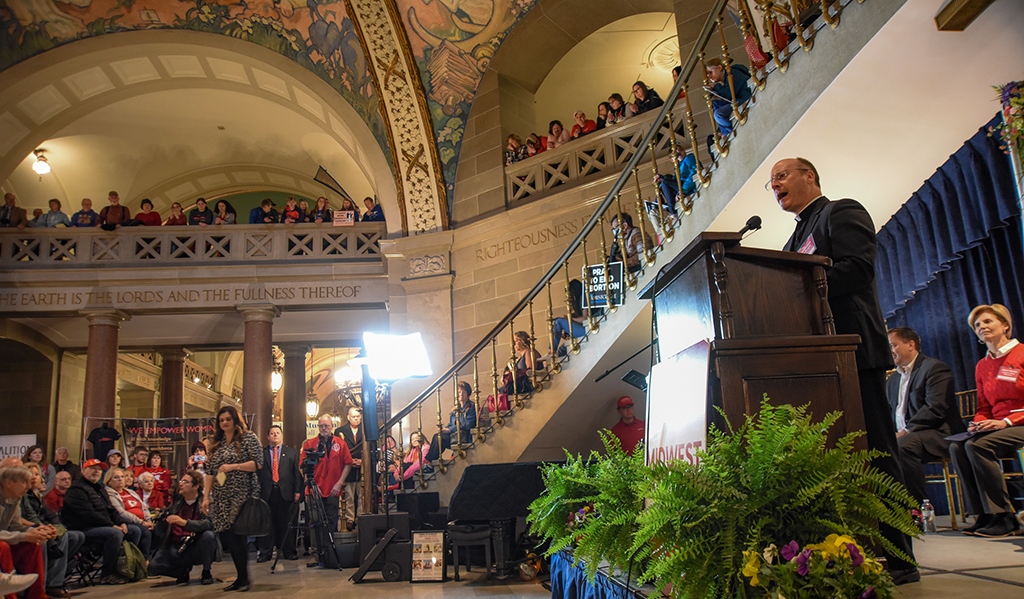 Bishop Shawn McKnight, of the Diocese of Jefferson City, addresses attendees to Wednesday’s 2022 Midwest March for Life rally at the Capitol. People packed into the first and second floor of the Rotunda to hear a variety of speakers on the issue of abortion. Following the speeches, an estimated 1,500 people formed a procession line for a march through downtown. (Julie Smith/News Tribune)