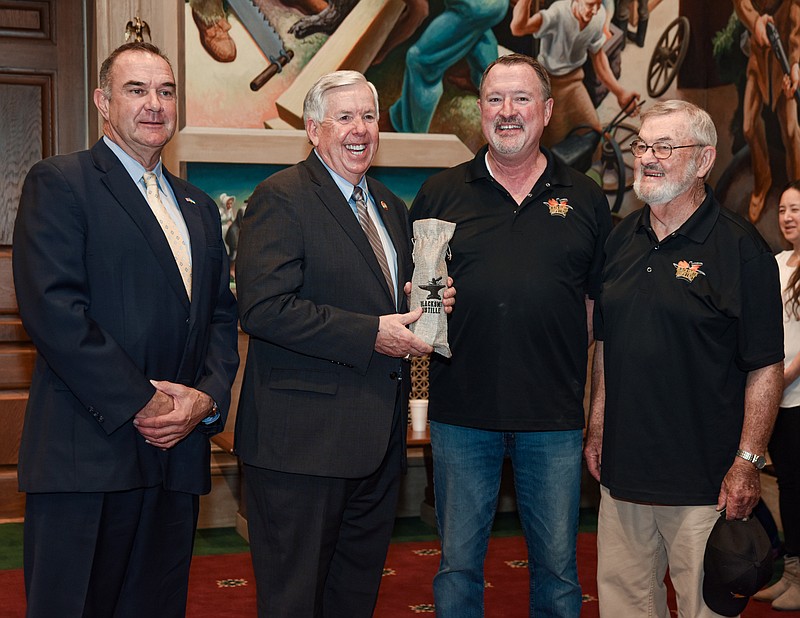 Julie Smith/News Tribune Gov. Mike Parson, second from left, laughed after joking that he may have to break into the bottle he just received from Lt. Gov. Mike Kehoe, at left, on behalf of , Mike Broker, III and Mike Broker, Jr., at right, the father-son team behind Blacksmith Distillery in Lohman. In celebration of the state's bicentennial in 2021, the distillery produced 200 bottles of bourbon, each one of which was numbered. As he is the 57th governor of Missouri, Parson was given bottle number 57 of 200 during the day's Buy Missouri festivities kickoff in the House of Representatives lounge.

The critical role small businesses play in Missouri was on full display Wednesday in the Capitol.

More than 40 businesses from around the state filled the Capitol's third floor Rotunda to promote Missouri-made products. The businesses represented a wide-range of industries, from jams and candles to lump charcoal and vinyl siding for houses.

Lt. Gov. Mike Kehoe invited Missouri's small-business owners to the Capital City for Buy Missouri Day at the Capitol, an effort to showcase the variety of Missouri-made products to state lawmakers and the public.

Buy Missouri is a statewide initiative that recognizes and promotes Missouri companies and manufacturers. Gov. Mike Parson began the program in 2017 while serving as lieutenant governor.

As of Wednesday, more than 480 businesses have signed up to be part of the Buy Missouri program and those companies employ more than 15,300 Missourians, Kehoe said.

"It's a simple concept, if we keep our dollars within our state borders, the ripple effect on our state's economy is that much better," Kehoe said.

Misty Schroeder, owner of Moreau Meat Market, said she joined Buy Missouri last year and has found it beneficial for networking with other Missouri businesses.

"It's got other people promoting us as well," Schroeder said. "So yeah, it's just been very interesting to meet people in (Buy Missouri) and see how that can help out our facility and help out other local businesses as well."

Moreau Meat Market opened its storefront in May 2021 and carries local meat sourced from within 30 miles of the shop. It offers local beef, pork, lamb, chicken and rabbits, as well as dry-aged steaks, beef jerky, snack sticks, summer sausage and beef bacon.

Schroeder said the meat market also carries local honey, ice cream and charcuterie boards produced by other Buy Missouri businesses. She was looking Wednesday for another Missouri-made product to potentially add to her storefront.

"It's just a win-win for everybody because we're bringing consumers to products that our people are making," Schroeder said. "So that makes it really nice."

Parson said on Wednesday that helping small-business owners is how the state moves forward.

"The future of our state depends on mom and pop businesses and small businesses," Parson told the Missouri business owners. "If you want your kids to stay in Missouri, if you want your grandkids to stay here, you've got to have jobs for them. And I would rather invest in all of you than a lot of the other investments this state makes for different things."

"I can't farm like my grandpa used to. I can't farm like my dad used to," Parson said. "As much as I would like to and I've learned a lot of things from them, technology changes, business plans have to change and so do all of you to meet the demands of the future."

Gary Hinegardner, distiller and owner of Wood Hat Spirits in New Florence, said his company was one of the first to produce a Missouri bourbon.

Wood Hat has been around since 2013 and makes 16 different products of bourbon and corn whiskey. The alcohol is made from different varieties of corn the company grows in Missouri and it's fermented, distilled and aged in the state. It is also stored in barrels made in Missouri from white oak grown in the state.

"It's just a way of identifying, hey, we're proud of Missouri, and we're made all in Missouri," he said.

Other state bourbons, like Kentucky bourbon, often use resources from other states, Hinegardner noted, but Missouri is well-positioned to grow its bourbon industry.

"North Missouri is corn and south Missouri is white oak," he said. "That's the two big ingredients for making bourbon, and we own them both."

In addition to promoting his Missouri-made products, Hinegardner said he was interested in urging lawmakers for looser regulations and tax breaks within the distilled spirits industry. 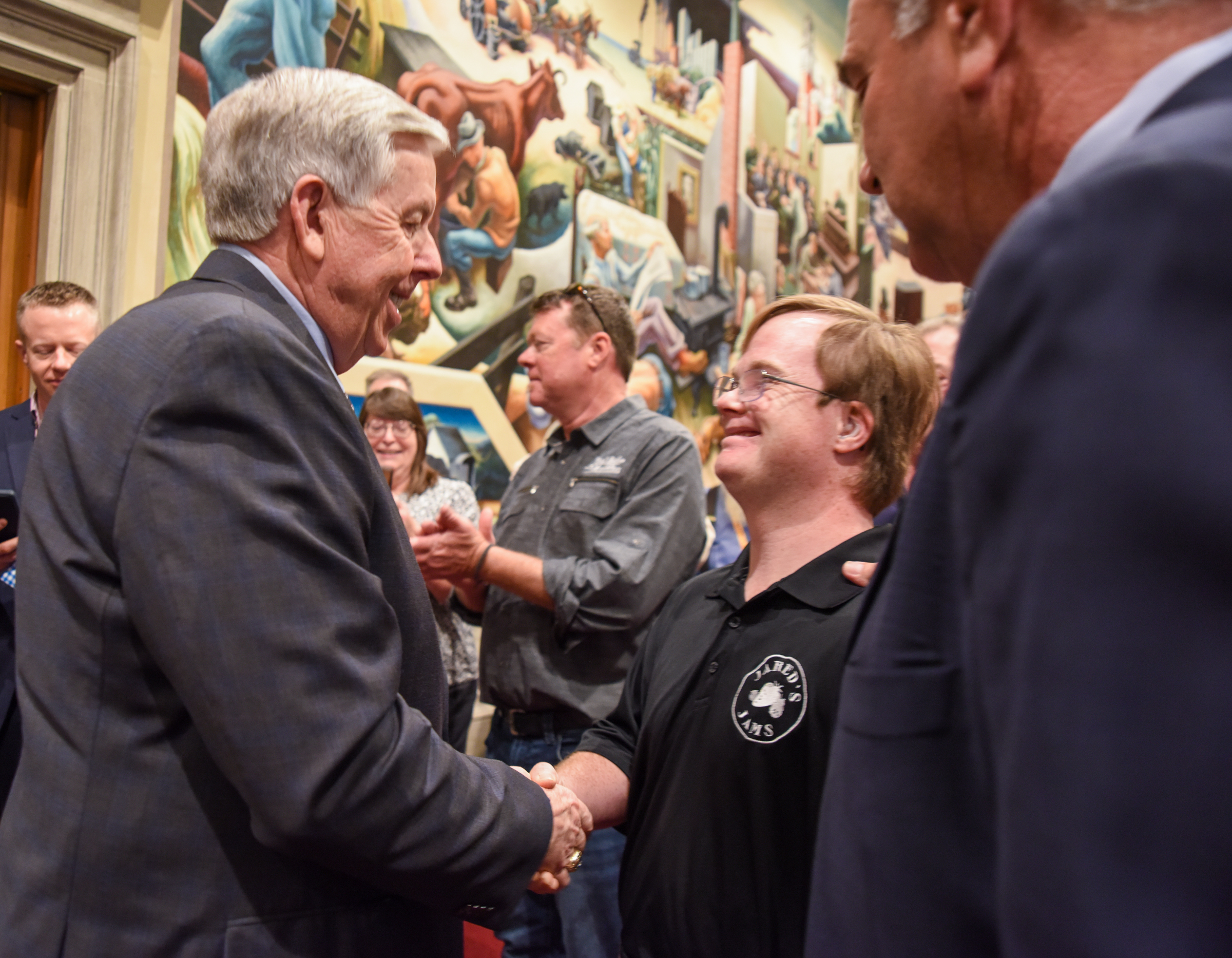 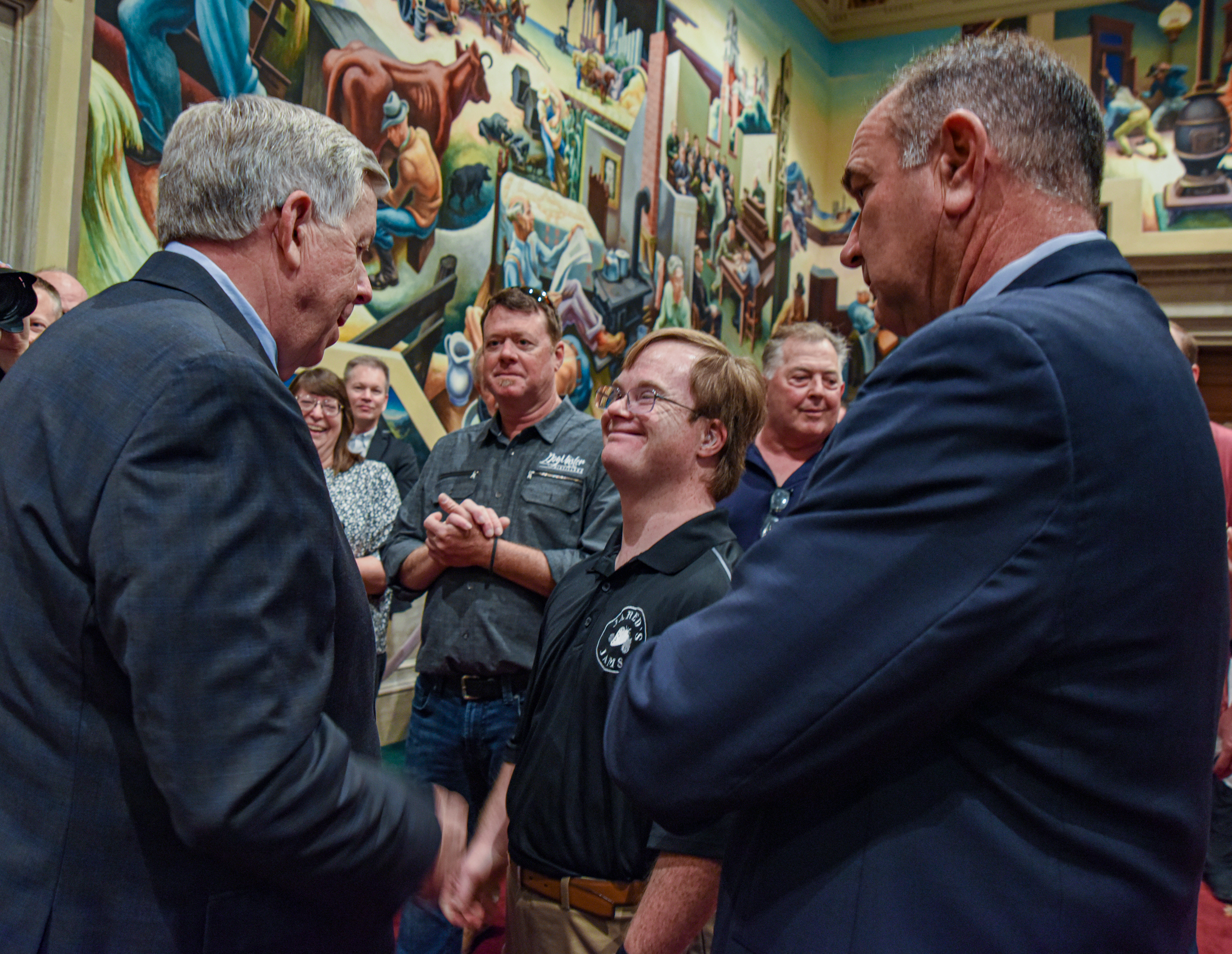 Julie Smith/News Tribune Gov. Mike Parson, left, and Lt. Gov. Mike Kehoe talk to Jared Niemeyer, middle, of Jared's Jams in Edina. Jared's Jams are favorites of both Kehoe and Parson who thanked him and his family for being at the Capitol Wednesday for Buy Missouri Day, a day highlighting Missouri-made products, like Jared's Jams. The family company makes jams, jellies, fruit syrups, coffee blends and more. 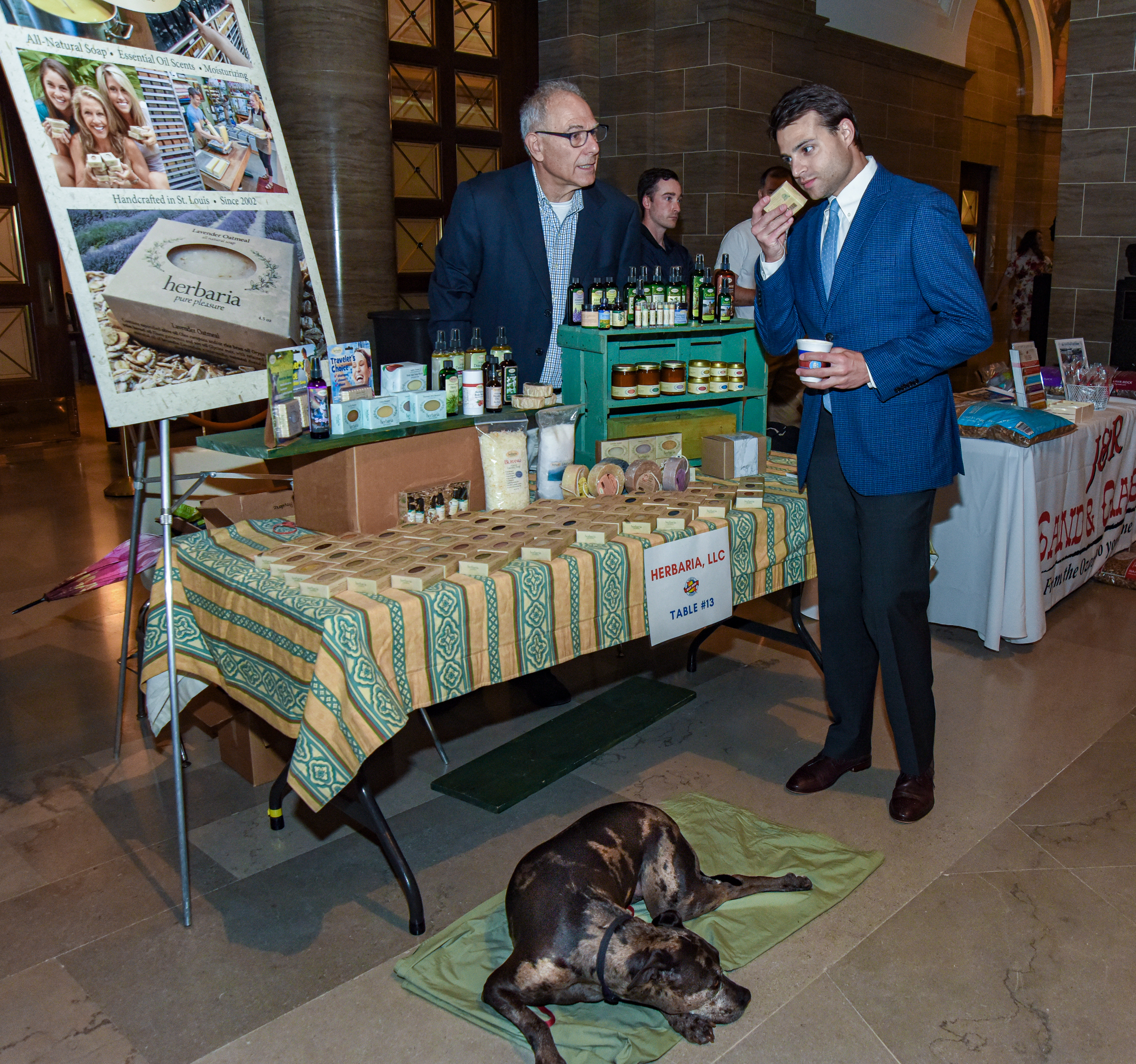 Julie Smith/News Tribune As part of Buy Missouri Day festivities in the Capitol Wednesday, Ken Gilberg of Herbaria Soap located on The Hill in St. Louis, brought his catahoula dog Soapy with him to feature his line of pet soaps along with the other soaps, balms and more. At right is Frank Catanzaro who is from St. Louis and works in the Capitol and was curious about the offerings. Herbaria was one of about 40 vendors who set up displays in the third floor rotunda so that visitors could peruse the items. 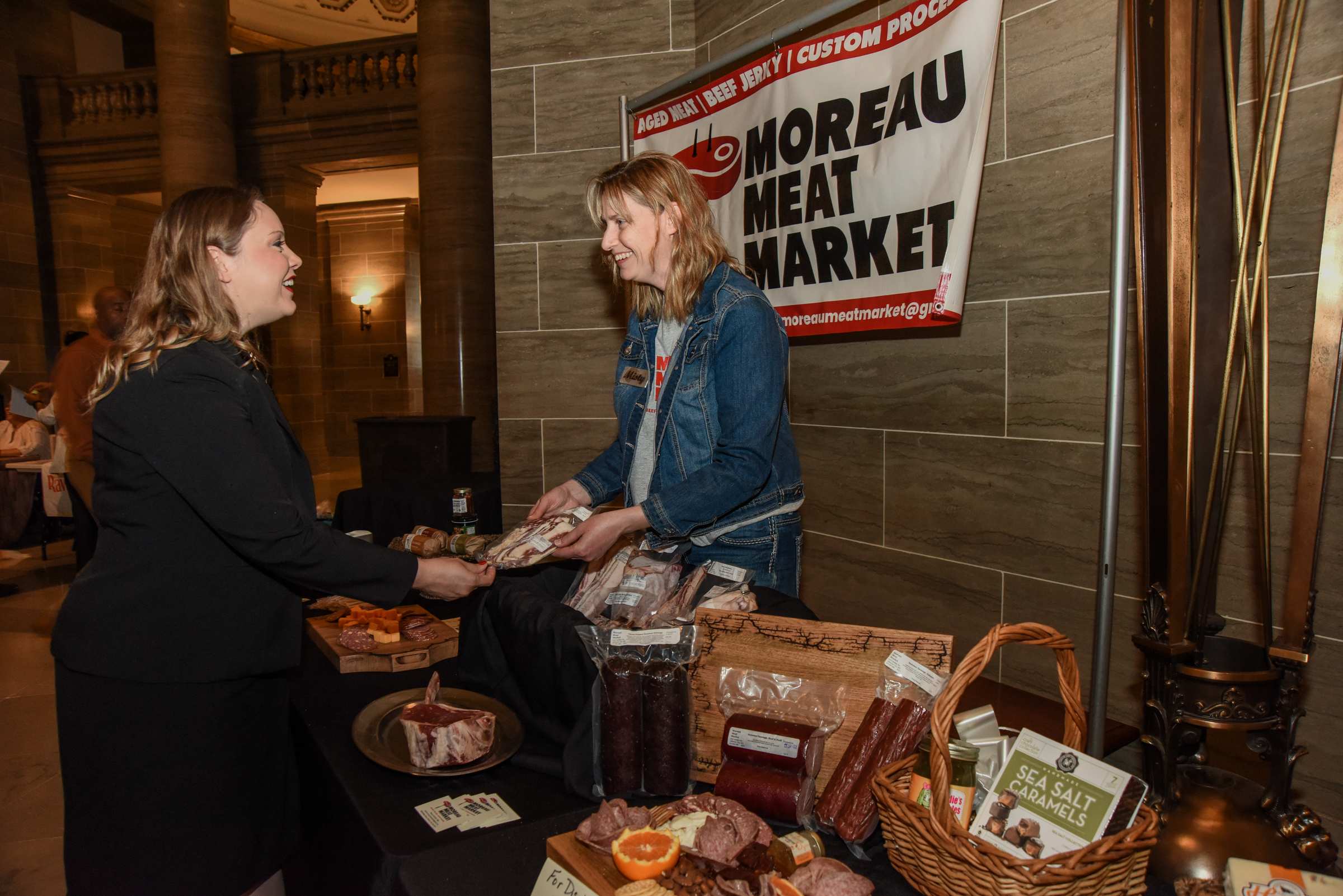 Julie Smith/News Tribune Rep. Sara Walsh asks Misty Schroeder of Moreau Meat Market about the beef bacon she's holding. Schroeder explained that the market, which is located a few miles south of Jefferson City on Buffalo Road, features locally sourced beef, pork, lamb and chicken which can be purchased along with other Missouri-made products. Moreau Meat Market also features smoked summer sausages and meat sticks made on site, charcouterie boards and lessons in creating your own. One of the popular features of the market is that the locally sourced beef is dry aged on site for a high-quality, tender cut of meat.