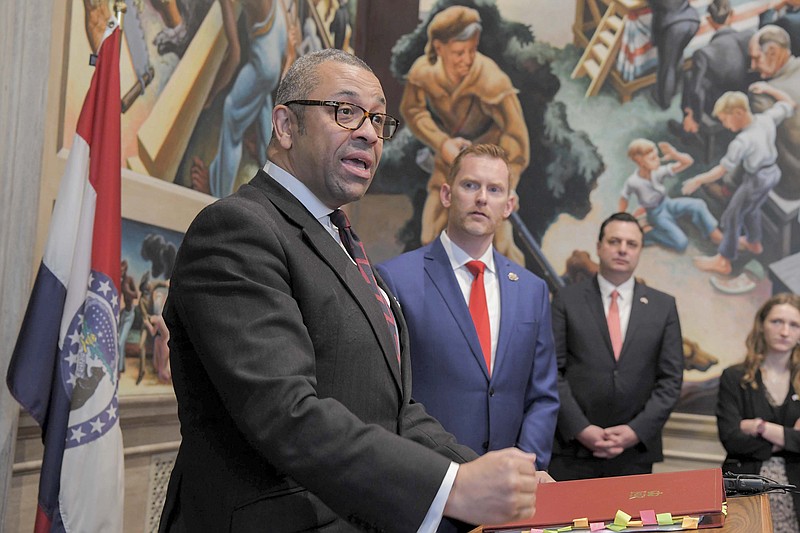 Tim Bommel/House Communications. UK Minister of State for Europe and North America James Cleverly, left, addresses members of the Friends of the UK Caucus in the House Lounge Tuesday morning.

"I want to make Missouri famous in the U.K."

That is one goal of James Cleverly, U.K. minister of state for Europe and North America. It's a role he's held since February; he facilitates and strengthens bonds between his home country and other governments across the two continents. He said he hoped to spread appreciation of Missouri and the U.K., and enforce the valuable partnership and unique bond the two entities share.

Cleverly visited the statehouse Tuesday to discuss trade and relations between Missouri and the U.K. with Missouri leaders. Cleverly, along with Mark Sutherland, British honorary consul to Missouri, and other officials, met with Gov. Mike Parson and Lt. Gov. Mike Kehoe before joining the House Friends of the U.K. Caucus and the full lower chamber during morning session.

After several meetings at the Capitol, Cleverly headed for Fulton, where then-Prime Minister Winston Churchill affirmed his country's bond with Missouri with a historic address in 1946.

Cleverly said more than 60 British companies from Associated Foods to Unilever do business in the Show Me State, while almost 30 Missouri companies including Hallmark, Enterprise were active across the pond. He said the import-export relationship amounted to around $600 million annually, a figure he said both governments hoped to bolster in the future.

"There is no doubt that the enduring friendship between Missouri and the United Kingdom has withstood the test of time," Cleverly told the Missouri House. "I know the slogan is the 'Show Me State,' and together we are showing the world that this unique relationship that defined the 20th century is going from strength to strength in the 21st century."

The visit followed Gov. Mike Parson's trade mission to the U.K. last month, where he worked to facilitate further economic bonds between the two governments.

The Friends of the U.K. Caucus is a bipartisan group of lawmakers dedicated to fostering and strengthening the state's unique relationship with the U.K. Established in 2020, it is touted as the first group of its kind among state governments.

Rep. Derek Grier, R-Chesterfield, the inaugural chair of the caucus, noted the importance of international relationships amid the Russian invasion of Ukraine and its economic fallout.

"We started this a couple years ago, made some tremendous progress in building a relationship between the House and the United Kingdom," Grier said. "Given the state of international events, this is a tremendously important relationship. It's good to have friends and allies who we can trade with, who we share rich history with, and who can help us fight evil when it rears its ugly head as we are seeing right now in the world."

The war was a recurring theme throughout the morning as several lawmakers noted the impact of the war on the international economy.

"Global events remind us that those who value democracy, who value peace, who value governments being held to account by its people rather than people being held to account by their government, we need to stick together," Cleverly told lawmakers. "The terrible assault that the people of Ukraine are withstanding at the hands of Vladimir Putin and the Russian military reminds us that we are not very far away from those things that we value highly being stripped away from us. Whilst the fight is happening over in Ukraine, it is a fight that affects all of us, and we'll see the ripple effects of things like gas prices, on things like food prices. The sad truth is these repercussions are inevitable.

"It sets out a vision to deepen our cooperation in so many areas: In science and innovation to economic prosperity and the battle against climate change," he said. "We are turning our vision into a reality by strengthening and deepening our collaboration."

Cleverly named the agricultural technology, food production and manufacturing sectors as major exports from the Show-Me State to his country.

Cleverly told reporters after the address that his meetings with Parson and Kehoe has been enthusiastic and said he hoped to help foster an even stronger bond between Missouri and the U.K. As he continues his journey across the Midwest, which has already seen a stop in Washington, D.C., and will see Cleverly and company visit Illinois and Minnesota, he said he hoped to continue strengthening the connections between the UK and the Midwest.

"There's already a strong bond between the U.K. and Missouri as a state, and I'm here to show the people of Missouri and the Midwest that the U.K. really values the strength of our relationship and building that relationship as we move forward," Cleverly told reporters after his address. "I want the people of Missouri to shout about your state, be proud of your state and come flooding over to the United Kingdom because there's so much more we could do." 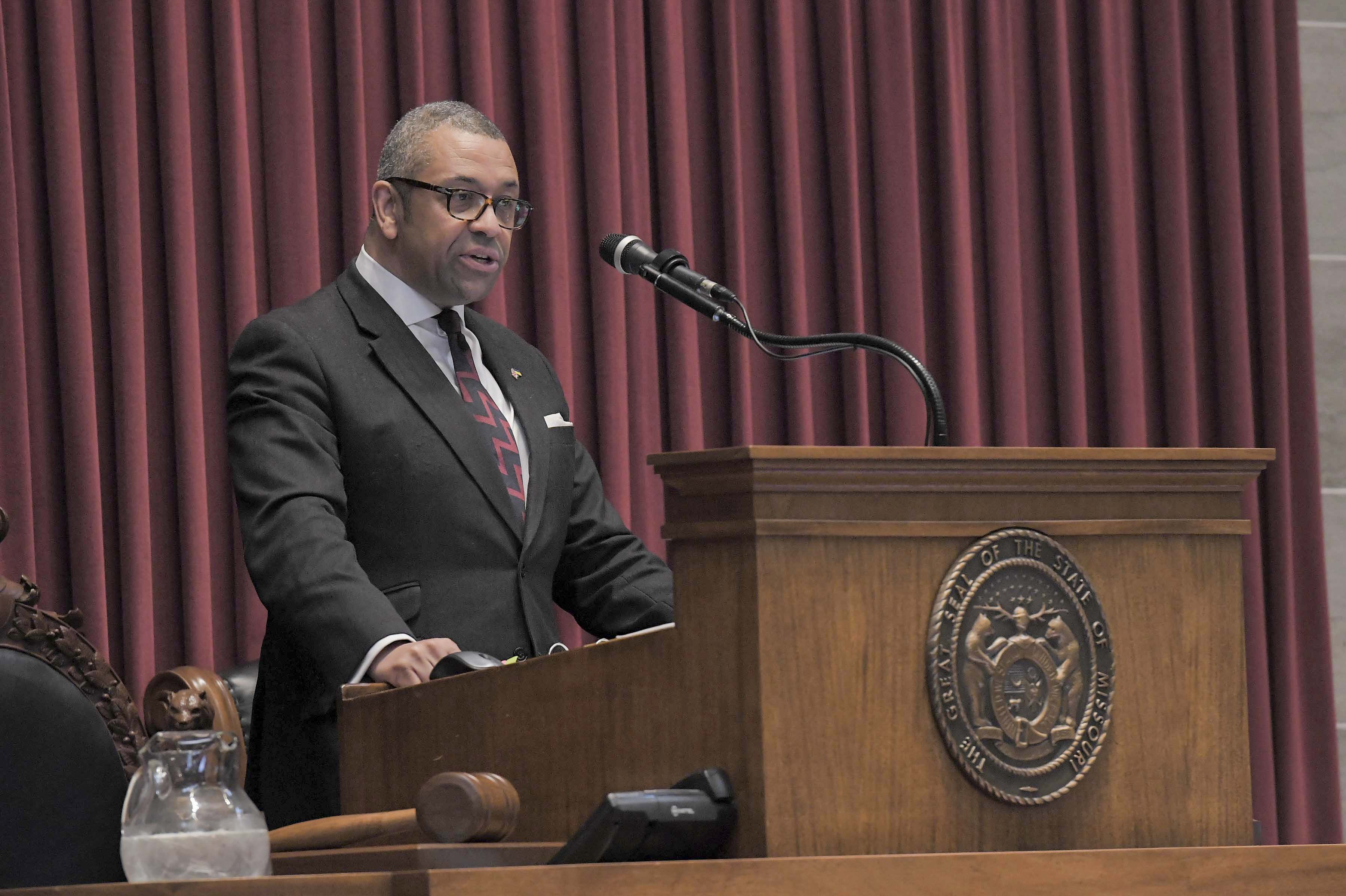