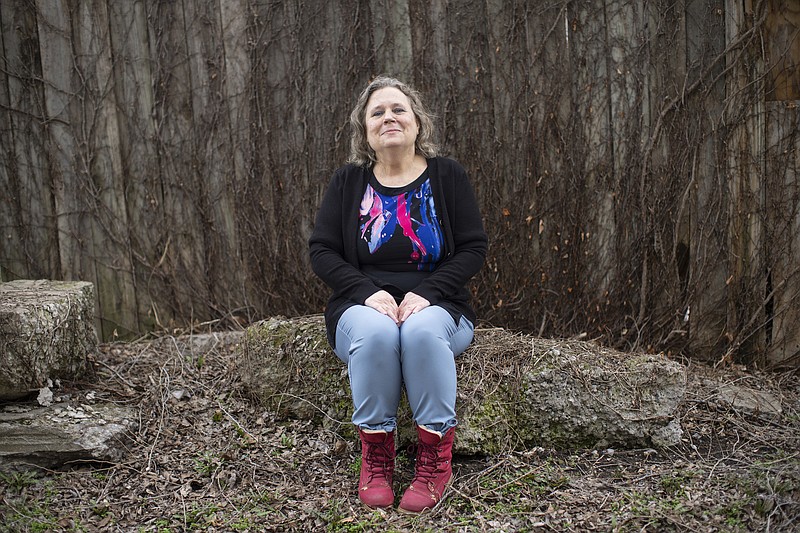 Diana Dalnes says one session with psilocybin helped her heal from depression that has haunted her for her entire life. State Rep. La Shawn Ford is drafting a bill that would decriminalize the use of psychedelics in Illinois, Tuesday, March 22, 2022. (E. Jason Wambsgans/Chicago Tribune/TNS)

CHICAGO -- Marine Corps veteran Justin Wigg was suffering from anger issues and other symptoms of post-traumatic stress disorder, but traditional medicine had been little help. So last fall, he traveled to Peru for a treatment that isn't legal in Illinois -- at least not yet.

It was a psychedelic, tea-like drink called ayahuasca, brewed from two tropical plants, and it produced hallucinations Wigg, a Chicagoan, compared to "'Alice in Wonderland' meets 'Fantasia.'" On the second of four ceremonial sessions, he said, he met a spirit figure called Mother Ayahuasca who lifted his burden.

"I asked her to help with anger, and it was like the snap of a fingers, just gone," he recalled. "I wasn't angry anymore, which I know sounds crazy, but that's the best way I can describe it."

Such treatments are gaining respect from researchers around the world, who have found natural psychedelics to be promising remedies against depression, anxiety and even alcohol dependence. But the federal government still considers them to have no legitimate medical purpose, which makes the plants illegal to grow, sell or consume.

A coalition of therapists, patients and advocates wants to change that in Illinois. They're working with state Rep. La Shawn Ford, a Chicago Democrat, to draft a bill that would decriminalize plant-based psychedelics and create a framework through which counselors, religious healers and others could use one of the drugs, psilocybin, the active ingredient in "magic mushrooms," therapeutically.

Though police in Illinois make few arrests for drugs such as mescaline, ibogaine or psilocybin, Ford said it would be wise to get in front as the plants' popularity grows.

"There's no reason not to think about this right now," Ford said. "Some people in the mental health profession are asking for a new approach. We don't need to have another situation where people are being criminalized like they were with marijuana."

Others urge caution, saying more studies are needed to understand the risks and benefits of the powerful drugs.

Dr. Danesh Alam, a Chicago psychiatrist and member of the Illinois Psychiatric Society, said while some research is promising, he's concerned about people using psychedelics in a risky way. More and more, he said, he is seeing patients whose psilocybin consumption has led to inappropriate or even criminal behavior.

"We need to be more cautious," he said. "Expanding therapies is important but we need to be careful and study all aspects before we do it."

Psychedelic plants have been part of religious rituals for thousands of years, and along with the synthetic hallucinogen LSD, became a fixture of the American counterculture in the 1960s. But the federal government made many of the compounds illegal in the early 1970s, stymying research into their potential benefits.

That started to pick up again around the turn of the century, prompted by encouraging results from European scientists. Matthew Johnson, the Susan Hill Ward professor in psychedelics and consciousness at the Johns Hopkins School of Medicine, said his lab has found psilocybin helps people quit smoking and recover from depression and anxiety.

He said contrary to traditional psychiatric meds, psilocybin can produce enduring changes after just a few doses. The evidence suggests mystical experiences help people gain a new perspective on their issues, he said.

"We think the long-term biological changes will be similar to those with successful psychotherapy," he said. "Essentially, the person has learned something about this problematic behavior in their life and changed their life as a result."

That's what happened with Diana Dalnes, a Chicagoan who struggled with depression and anxiety for years. After a positive but exhausting experience with ketamine, an anesthetic that can produce out-of-body sensations, she tried psilocybin mushrooms at a rural retreat last year.

She did yoga and breathing exercises and then drank a small dose brewed into tea. When the drug took hold, she said, she felt a sense of wisdom, serenity and oneness with the universe, resulting in a lasting change to her mood.

"I don't overreact," she said. "I don't get so angry. I'm just a calmer person. Anyone who knows me could see the difference."

The retreat was billed as a religious gathering, which put it into a legal gray area. Following a Supreme Court decision that permitted adherents of a small church to use ayahuasca during ceremonies, the U.S. Drug Enforcement Administration allowed people to seek religious exemptions from the Controlled Substances Act.

No one in Illinois has made such a request, a DEA spokesperson said, but George Lake, a Louisiana attorney who advises religious groups about psychedelics, contends the agency's blessing isn't necessary given the Constitution's guarantee of religious liberty.

On a practical level, he said, law enforcement makes few arrests related to the ritual use of psychedelics.

"I think for the most part, when they figure out these people are involved in a religious exercise, they're more or less hands-off," he said.

After reading journalist Michael Pollan's 2018 book on psychedelics, "How to Change Your Mind," he tried psilocybin mushrooms. From there, sometimes on his own, sometimes under the guidance of a therapist, he moved on to ayahuasca, the synthetic drugs MDMA and LSD and even the psychoactive secretions of a desert toad.

He said the sessions helped him conquer his ailments, which he concluded were psychosomatic, and make peace with traumatic episodes in his past. There has been no downside, he said.

"My career is going well, I've forgiven (people who mistreated him) and deepened friendships," he said. "And it's fun. I enjoy it."

But not all psychedelic experiences are so benign. Johnson said the substances can cause cardiovascular problems on rare occasions, including heart attacks. People under the influence can also be vulnerable to sexual abuse or endanger themselves during a bad trip, he said.

He said physicians should be involved as a precaution if the plants are being used to address physical or psychological issues.

"Someone's medical license needs to be on the line if something's not done right," he said.

The draft of the Illinois bill, however, says people who lead psilocybin sessions won't need a medical degree or even a bachelor's degree, though they will have to pass a licensing exam.

Psychologist Geoff Bathje of Adler University and Chicago's Sana Healing Collective, which consults with people who use psychedelics, said backers of the bill want to ensure equity by allowing a broad range of practitioners.

"People could get trained in their own community instead of going to medical school, a pathway that's very long and expensive and makes the service expensive, too," he said. "It can be done safely in a much less complicated way."

Ford said the bill could go through many changes before he introduces it in the legislature, probably next year. Meanwhile, other states and cities are going ahead with their own versions.

The leader is Oregon, which passed a ballot measure in 2020 to permit psilocybin services. But Sam Chapman, who led the campaign, said take-home doses won't be allowed when the law takes hold next year: Sessions must take place at a licensed facility.

"We know it's all eyes on Oregon, and that means while the program won't be perfect out of the gate, it needs to have a solid foundation to act as a model for other states to follow," he said.

Jean Lacy of the Illinois Psychedelic Society anticipates plenty of pushback once the Illinois bill is introduced, but said that will offer an opportunity to educate people about substances still cloaked in mystery and suspicion.

"The more we're honest about it, the more conversations we have, the better that we can help the general public and lawmakers understand that people are engaging with these substances with much more prevalence than we realize, and they deserve to do so safely," she said. 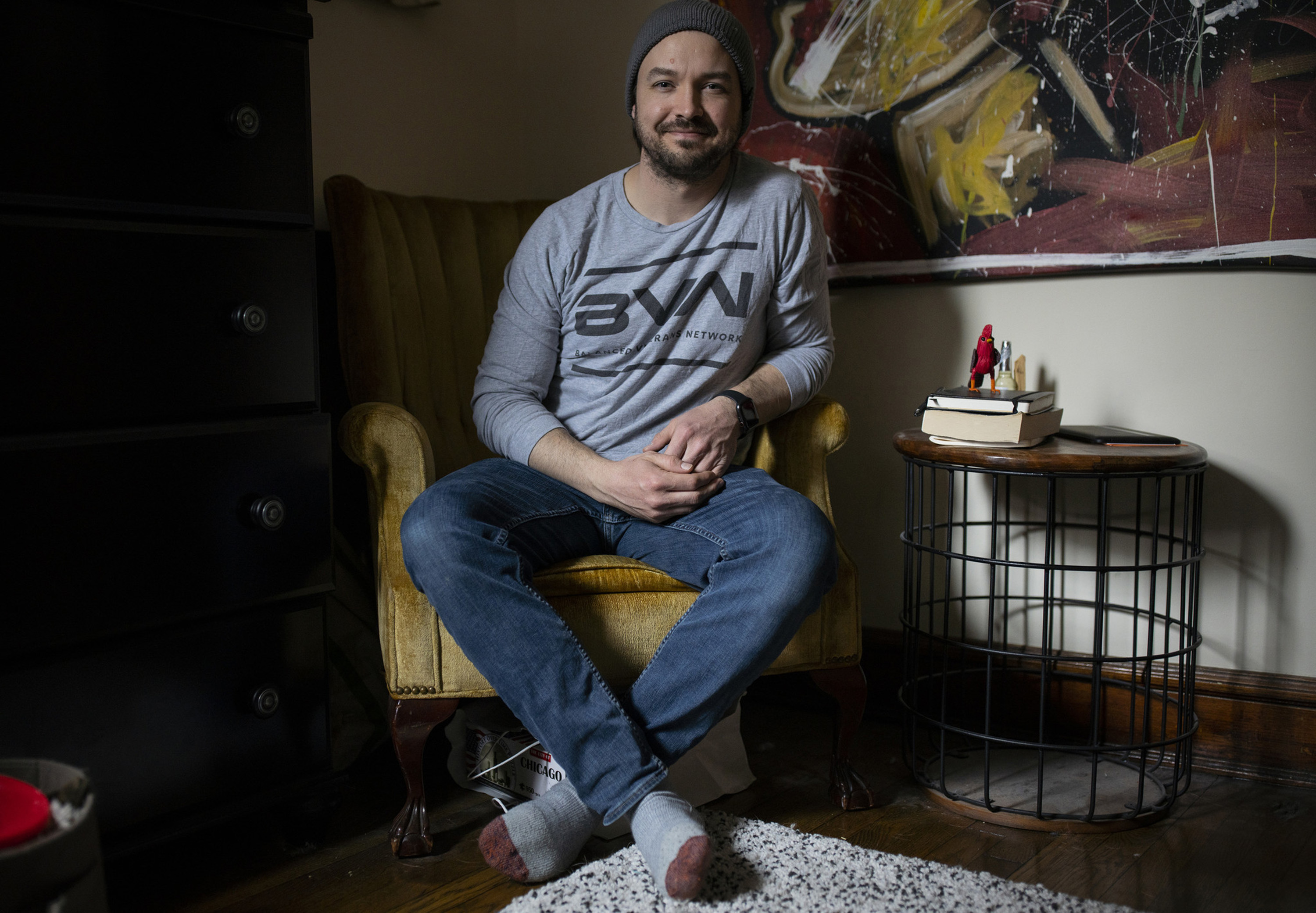 Ex-Marine Justin Wigg is part of the effort for the decriminalization and therapeutic use of psychedelic plants such as ayahuasca and psilocybin, Friday, March 18, 2022. (E. Jason Wambsgans/Chicago Tribune/TNS)