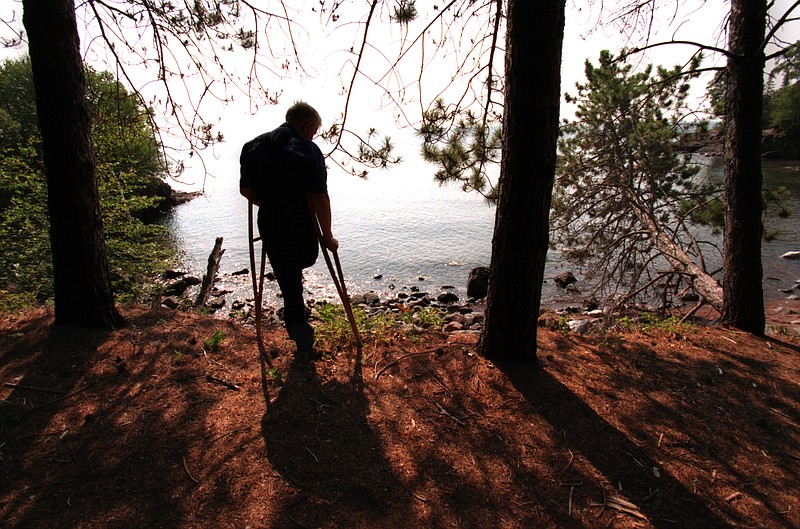 In 1998, Alden Lind stood among the pines overlooking Lake Superior at the former site of Twin Points Resorts, which his family owned and operated for several decades. (Marlin Levison/Minneapolis Star Tribune/TNS)

MINNEAPOLIS -- In the Land of 10,000 Lakes, one beach in northern Minnesota stands out. While most of Lake Superior's iconic shoreline is gray rock, this stretch is a surprising pink.

Many North Shore visitors likely skirt past Iona's Beach as they zip by on Highway 61 en route to popular waterfalls and some of the most visited state parks in Minnesota. But those who veer off the beaten path find salmon-colored pebbles and a serene spot to take in the largest of the five Great Lakes.

"It is a relatively unusual composition of volcanic rock," said John Green, a retired Duluth professor who wrote a book on the geology of the North Shore.

It's not just the pink color that makes this beach distinct. Iona's, about 15 miles north of Two Harbors between Gooseberry Falls and Split Rock Lighthouse state parks, is dubbed a "singing beach." In the right conditions, the frigid waves toss the cobbles, creating a subtle tinkling chime rippling down the crescent-shaped cove.

"You have to be there on the right day -- it can't be too windy and it can't be still," said AmberBeth VanNingen of the Minnesota Department of Natural Resources. "There's an allure ... it's just a magical thing about the place."

The DNR has designated 11 acres as a Scientific and Natural Area -- one of more than 160 in the state. While many SNAs preserve public lands for rare plants, birds and other biological features, Iona's was established to protect its unique geology.

The area's billion-year-old rocks originated from lava flows, solidifying into either basalt -- the dark gray rock that dominates the North Shore -- or the paler rhyolite, which also makes up the impressive Palisade Head nearby. Water and ice have chipped away at the neighboring 30-foot-high rhyolite cliffs; the powerful waves have rounded the pink fragments and carried them southwest to build up the beach, where a basalt outcrop blocks the rocks from traveling farther.

Green advocated for the protection of Iona's Beach and Sugarloaf Point, about 30 miles away, in the 1980s and 1990s.

"Everybody thought that it would be a shame to have that developed," Green said. "There's such a real estate rush these days. ... It's really important that ... special places like this do get preserved for future generations. They don't make shoreline anymore."

Long after the Ojibwe were forced from their land in northern Minnesota, Scandinavian immigrants began settling along the North Shore. By the 1930s, as Americans started traveling by cars, tourism took off.

Iona Lind, a Finnish immigrant, came across the wild, rugged land near the beach with her husband, John, an ore dock worker. The couple cleared the dense brush and John hand-built simple cabins, some with materials he scavenged from an old Civilian Conservation Corps camp.

Twin Points Resort opened in 1938. For nearly six decades, the family operated a restaurant, motel and the pink, blue and yellow cabins that sat along 3,300 feet of shoreline just steps from the tranquil cove.

"We got beautiful cabins with a fine view," Iona told Tribune columnist George Grim in 1950. Iona would often greet guests with a key and jar filled with pansies. Up until the time they closed the resort in 1994, partly a casualty of changing visitor tastes in accommodations, the Linds were renting some cabins for $25 a night.

The family could have sold their land for $1 million or more, according to a 1995 Star Tribune article. Instead, Iona wanted the land to be accessible to the public, said Arlene Lehto, the couple's daughter, who was an environmentalist and a state legislator in the 1970s and 1980s.

"We were always looking to the future, for the state to take over that property because there just weren't that many places that anybody could get to the lakeshore," said Lehto, 82, of Duluth. "It's refreshing (to be there). ... I'm proud of it."

The family was involved with the Save Lake Superior Association, among the plaintiffs in the 1970s case against the Reserve Mining Co. for dumping taconite tailings into the lake.

"We've got to try to protect the North Shore," the couple's son Alden Lind, a well-known Duluth environmentalist and professor, said in the 1995 article. "It's one of those special places that characterize the beauty of Minnesota." (Alden died in 2001.)

The family sold their land in 1995 in a complicated land swap. Three years later, Iona died at age 89, her obituary urging continued work to restore and protect the lake -- "this most wondrous of nature's creations."

Iona's Beach is off the Gitchi-Gami State Trail, the paved path named after the Ojibwe word for the Great Lake, and it's part of the Lake Superior Circle Tour. Similar to other SNAs, visitors won't find many amenities beyond a small parking lot and boat launch. But these public lands are purposely left undisturbed; collecting rocks is prohibited.

Since it's free to visit, the DNR doesn't track numbers but VanNingen, the acting resource management coordinator for its SNA program, says it is one of the state's busier SNAs during the spring and summer.

"It's a very Zen place to visit," says Arika Preas, a naturalist with the SNA programs. "It's amazing how long you can stand and look at the lake. The time just disappears."