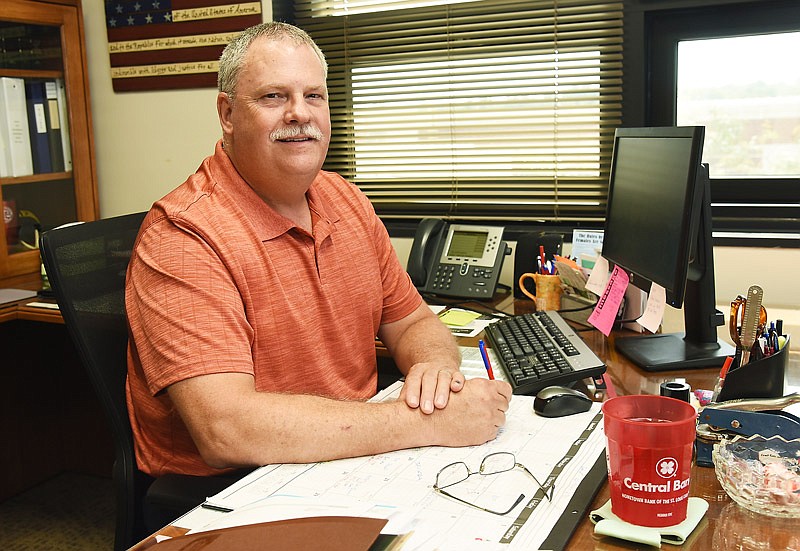 Steve Korsmeyer, poses for this Sept. 21, 2018 photo in his office of Cole County Clerk.

Cole County Clerk Steve Korsmeyer said he's still concerned over problems they had with election software at one of their polling locations Tuesday night, but he's glad protocols they had in place caught the problem to keep the integrity of the election intact.

The problem, Korsmeyer said, was with software used at Our Savior's Lutheran Church on Southwest Boulevard where residents of Ward 4, Precinct 1 cast their ballots.

"When we got the equipment back to our office, our laptop wouldn't accept the results because, looking at the closing report, we found the scanner doubled the ballot count and the votes for each race," Korsmeyer said.

The closing report on the scanner showed double that amount, or 1,072 ballots cast.

"So we decided to program our absentee voting machine here in the clerk's office to scan like it would for 4/1 and re-enter the ballots," Korsmeyer said. "Our count watchers entered the ballots, and the attached closing report showed the correct ballot count and votes for each race."

Because they had to take these measures, the final vote total for the election was delayed until shortly after 10 p.m.

"We contacted the computer company last night (Tuesday night), and they are aware of the issue," Korsmeyer said. "We did update all our machines with new software before this election. We did not have any issues when we pre-tested this machine."

Korsmeyer said they will do post testing of this machine and all their others Monday.

"It concerns me that a scanner can test well at the pre-test and then count incorrectly on Election Day," Korsmeyer said. "We're not sure what the problem was or is and neither is the computer company. Other counties reported similar problems Tuesday night, but I'm not sure if they have the same equipment as we do. We need to make sure this doesn't happen again in the primary election in August."

Korsmeyer hopes to see another turnout that exceeds his prediction come August. For the municipal election, he had predicted a 10 percent turnout, but it ended up at 15.6 percent.

"School board races in 23 of the 28 precincts drove the voters to the polls," Korsmeyer said.

Out of the 15 voting precincts in Jefferson City, voter turnout totals show only three precincts with a voter turnout below 10 percent. The highest totals were in Ward 3 in Precincts 1 and 2 where the turnout was nearly 28 percent and 22 percent, respectively. Out in the county, only one precinct was below the 10 percent mark.

Korsmeyer said the other major issue they ran into on Tuesday was the polling place change for Ward 3, Precinct 1, which was moved to Jefferson City Bible Chapel, 2804 Sue Drive, instead of at St. Joseph Cathedral on West Main Street which is undergoing renovations.

"We sent out letters and put out media releases, but many people still went to the Cathedral," Korsmeyer said. It's believed the renovations at the Cathedral will still be going on when the August election takes place.