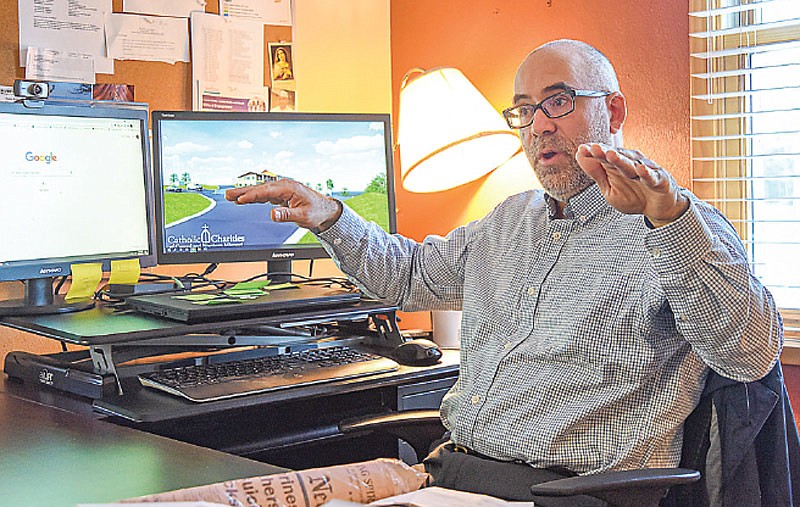 Dan Lester, executive director of Catholic Charities of Central and Northern Missouri, talks about the charity's ability to help refugees settle in the Mid-Missouri area. The organization has been gearing up for the expected influx of refugees.

If you have a "mother-in-law room," bed and breakfast or even a bedroom over a garage, staff settling Afghan refugees in the area may want to speak with you.

There are many more to come, and the challenges remain the same for everyone across the United States, whether in Los Angeles, New York or anywhere in between - housing is the big question, local Catholic Charities Director Dan Lester said.

Agencies are reaching out to landlords, homeowners, people who operate Airbnb's, and anyone else with space available, he said.

"We're just trying to piece together what the long-term plan is going to look like to make sure they get housed when they are initially coming into our communities," Lester said. "We've had good luck so far. We've got a number of different places - whether they are apartments or mother-in-law units, farmhouses - all kinds of different places that have lined up for some of our arrivals."

The nonprofit is making certain it is looking at all the different possibilities. There will be a large influx of people over a short period of time, Lester said.

The first arrival was a single young man.

"He's here. And he's safe. And he's getting all of his initial services," Lester said. "Getting connected with doctors and employers and all the stuff that you have to do to help someone acclimate to the new community."

That built in another three-week window, Lester continued.

To learn more about welcoming all refugees into Central Missouri, visit the Catholic Charities website at cccnmo.diojeffcity.org

"People have been starting to trickle out to different communities across the U.S.," he said. "The messaging is, 'Stand by, because they are going to start arriving more quickly in bigger numbers.'"

The speed in which officials hoped to process refugees has not reached what was initially thought.

Many won't be settled before the end of the year, but they will get settled.

A number of nonprofits and faith communities have connected with Catholic Charities because they want to help resettle some of the new arrivals, Lester said. They are really interested in "community sponsorship" of the refugees.

Community sponsorship is essentially a church group or another group taking an individual or family and "adopting" them.

"With guidance from Catholic Charities, they take on some of those case management services - helping these folks get to their first doctor appointment, helping them navigate a store for the first time," Lester said. "Helping them with, 'How do you cook all these foods I'm not familiar with?' It's really an opportunity for the community to get really really involved in welcoming these folks to their new home."

It's not just Afghan refugees. We'll be seeing more refugees, in general, during the coming years, he said.

Catholic Charities had sponsorship programs in the past, but they'd been really small. It's now scheduling meetings with leadership in communities in the area, and hoping to get them excited about that.

"It's a wonderful chance," Lester said, "for the community to be hands-on in this work. Agencies like ours can do a lot, but at the end of the day, you need more hands. And these folks need more hands.

"If we can help them make that transition into the community as quickly as possible, the more successful their adjustment to their new lives is going to be."