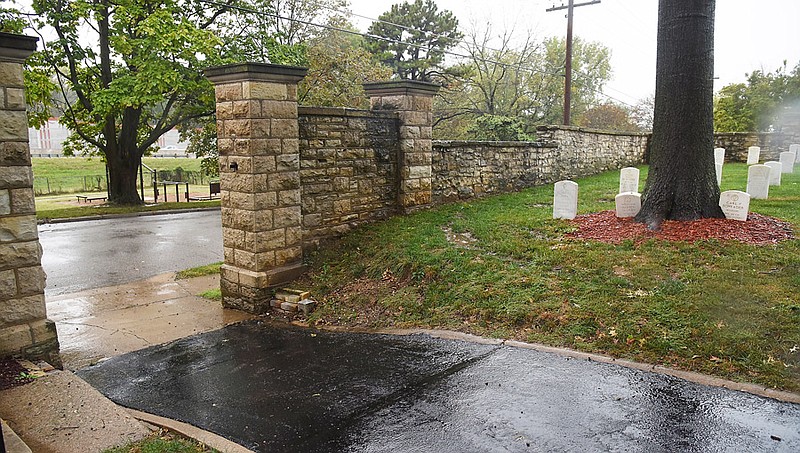 Expansion of the Jefferson City National Cemetery, seen in the foreground, is proposed for the area occupied by Jefferson City's East Miller Street Park, seen across the street in the upper left, which city officials plan to move to an area on the south side of U.S. 50/63.

A potential expansion of the Jefferson City National Cemetery remains on the table, but the city may attach a deadline.

The Jefferson City Council will consider a bill Monday that would support the expansion of the current cemetery. It gives the Veteran's Administration (VA) two years to accept the discussed expansion site; otherwise, the offer expires.

In February 2020, the Parks and Recreation Commission approved transferring East Miller Park, 998 E. Miller St., to the Veterans Administration for an expansion of the cemetery.

The National Cemetery, which is across the street from the park, ran out of space for new burials in 1961 and cremation sites in 1996. At the moment, it is only open to subsequent burials for veterans or eligible family members at existing gravesites.

State Rep. Dave Griffith, along with area veteran groups, wants to see the cemetery reopened so veterans can be buried locally.

Jefferson Barracks National Cemetery in St. Louis is the only national cemetery in Missouri with open burial spaces.

Griffith said he was advised it would be in the project's best interest to have the City Council approval before taking the proposition to the VA.

Despite the two-year sunset on the offer, Griffith said he expects to have an answer pretty quickly after visiting with the VA.

"They'll either say no, hell no, or we'll consider it," he said.

The proposal first went before the Parks and Recreation Commission in late 2019, when lobbyist Tom Rackers said groups have spent two years looking for options to build a new veterans cemetery in the area. However, those options were expensive.

If the cemetery expanded into East Miller Park, it would double in size and be kept together.

However, some community members spoke up against the idea of losing the neighborhood park.

The proposed plan includes constructing a new park on the other side of U.S. 50, on East Elm Street.

The city already owns that property, but it would need to be moved to the Parks, Recreation and Forestry Department before it could be developed into a park.

Plans also include an update to Park Place Neighborhood Park, which is a few blocks from East Miller Park.

Han Overton, a resident in the East Miller area, protested outside City Hall in December 2019 while the Parks Commission discussed the idea and again in East Miller Park after its approval in early 2020.

He also started a petition, which now has more than 750 signatures, to keep East Miller Park where it is.

The replacement doesn't replace the loss, Overton said then, because people won't cross the expressway to go to the new park.

It removes an amenity from the area, he said, which is largely Black. The park sits on the edge of the Historic Foot District, which was Jefferson City's Black business and residential district before the 1960s when much of it was lost.

According to council documents, cemetery plans would include a ceremonial plaza and multipurpose building on one end of the property, next to the current parking lot which would remain, and the rest of the site would be used for approximately 480 graves.

The council won't make a decision Monday night, but will wait until the Oct. 4 council meeting.

If the council does support the land transfer, the VA would need to accept it in order for the transaction to go through.

The City Council will:

Approve a bid from Central Missouri Plumbing LLC for plumbing service for city facilities for one year to not exceed $50,000.

Approve the installation of a community pantry box next to the sidewalk in the 200 block of Adams Street.

A $35,176 agreement with JCW Boonville Properties LLC for the elimination of the Westport pump station.

Acceptance of a $108,652 Federal Transit Administration grant to purchase two replacement buses for Handiwheels. The city staff is requesting a rule suspension so council could approve the funding Monday rather than waiting for the next meeting.

A $389,631 construction contract with SAK Construction LLC for a pipe-lining project.

Amend the budget to include an additional Neighborhood Services specialist position within the Department of Planning and Protective Services to assist with the increase in federal funding.

Amend the city code to allow the city administrator to have more real estate purchasing authority.

Authorize an agreement with Ameren Missouri for street lighting.

Amend city code to include the offense of second-degree trespassing to align with state law.

Amend the personnel policy for standby pay to reflect approved funding requests in the 2022 city budget.

Authorize an agreement with Midwest ATC Services for air traffic control services from Jan. 1, 2021, through March 31, 2021.

Authorize a $62,910 construction contract with SLV Roofing for roof replacement at the salt shed at Hyde Park and the Pavitt Building at Jefferson City Memorial Airport. It would also approve the use of insurance money for part of the work and general fund money for the remaining expense.

Vacating the right-of-way at the 400 block of Union and Case streets and the alleys to the south and north as well as the Oberman Place right-of-way. The request comes from the Jefferson City School District and will allow those areas to be used for the construction of the new soccer and baseball fields.

Authorizing the construction of a single-family home at 805 Monroe St. by the Central Missouri Community Action Agency. The agency would also purchase the property from the city for $500.

The City Council will meet in person 6 p.m. Monday, but will have a virtual option due to COVID-19 and social-distancing recommendations.

Community members can attend the meeting at the council chambers in City Hall, 320 E. McCarty St., or view the meeting live via the city's YouTube page.