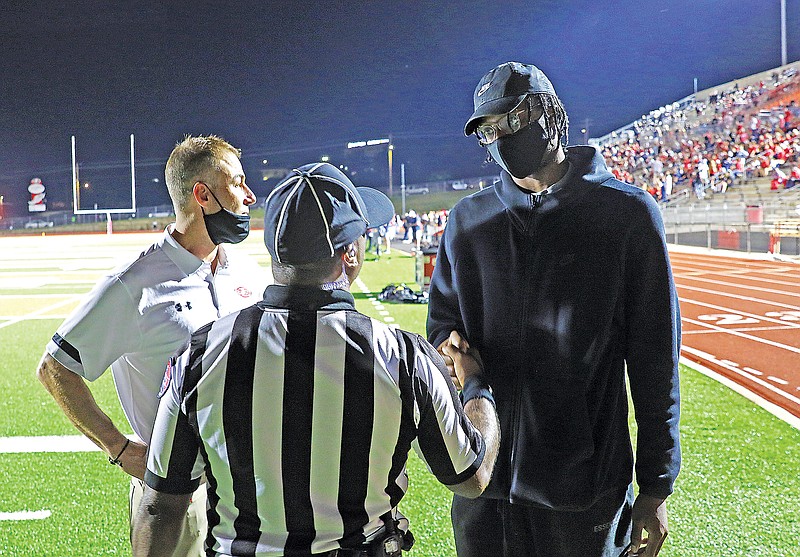 Former Jefferson City Jays basketball player OG Anunoby speaks with a referee at halftime of Friday night's football game between Jefferson City and Rock Bridge at Adkins Stadium. Anunoby, who plays for the Toronto Raptors, had his No. 5 jersey retired Friday during a ceremony at midfield.

Dressed in a black sweatshirt and shorts, with a Nike ball cap, OG Anunoby wasn't trying to stand out.

He didn't need to. Wherever Anunoby walked, people flocked to his side.

He towered above Jays basketball coach Josh Buffington and anyone who was around him and his 6-foot-9 frame, which was the only reason you'd have been able to spot him in the crowd at the far corner of the field at Adkins Stadium on Friday night.

The Toronto Raptors forward and Jefferson City High School graduate who has been away because of his blossoming professional career returned for the first time in years, and it was a special occasion.

"This place has made a big impact," Anunoby said. "I met a lot of my friends, lifelong friends, here. I grew up here."

Jefferson City Mayor Carrie Tergin proclaimed Friday as "OG Anunoby Day," and the Jays hosted him for the retirement of his No. 5 jersey with a ceremony at halftime of the Jays football game against Rock Bridge.

Anunoby walked out to midfield at halftime flanked by Buffington, Tergin and athletic director Ehren Earlywine, and was presented with a framed miniature No. 5 Jefferson City white jersey while a slideshow of his career was shown on the video board in the background. It started with pictures of a wiry Anunoby in a Jays jersey and a white headband before shuffling through his career at Indiana, and now, with the Raptors.

The star of the show didn't always like the spotlight. Anunoby jokingly put his framed jersey in front of his face as the army of cameras inched closer and closer to him and a group of administrators at midfield.

When dozens of people were lined up at the fence outside the track when Anunoby returned from midfield, waiting for a picture of the former Jays star, he made sure to stop for every picture, giving a peace sign while children walked up to take selfie after selfie with the NBA champion.

"He is just such a likable person," Buffington said. "He loves kids, he loves the community, he loves Jeff City.

"He's one of those guys that can just light up a room without even having to say anything."

"OK kids, it's time to go," was said multiple times while people tried to drag OG away so he could go back into his suite in the press box.

But each time, Anunoby didn't budge. He stayed and waited, taking picture after picture while the crowd next to the field grew.

Anunoby stayed until each person had gotten a keepsake with the local legend, and then walked off the track and back into the night.

This night was a reunion that had been delayed because of the COVID-19 pandemic, which has made it extremely difficult since most of Anunoby's time is spent in Canada.

He got to see Buffington, a former rival who coached at Helias while he wore the red and white, along with many teachers, one of whom baked him a cake while he was a high school student.

"It's awesome to be back and see everyone and see my old teachers," Anunoby said. "It's really cool."

That first taste and a future without a pandemic keeping him from the Capital City could open up some return trips in the future.

"I definitely want to start coming back more," he said.