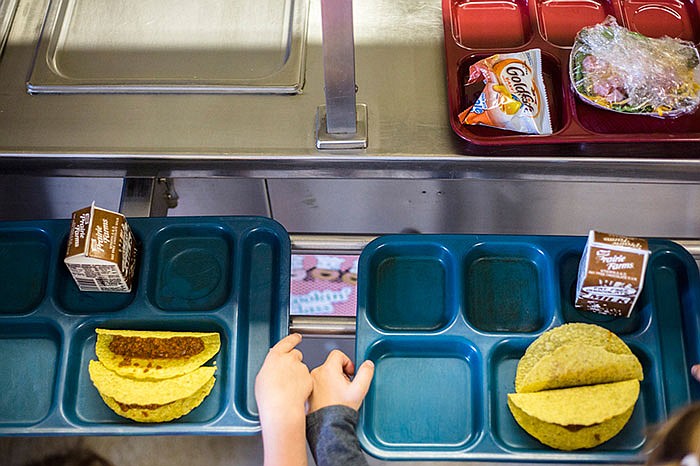 Schools across the nation, including Cole County, are experiencing challenges with receiving food for school meals due to supply chain issues and staffing shortages among food vendors.

Earlier in the pandemic, COVID-19 caused supply chain challenges for grocery stores and restaurants. Now, it's schools taking the hit, forcing school districts to do what they can to serve breakfast and lunch.

These school food service disruptions are highly driven by staffing shortages among commercial distributors' warehouses and truck drivers, according to the Missouri Department of Elementary and Secondary Education. These labor shortages are forcing these vendors to drop customers, which are often the schools they serve.

Additional nationwide disruptions are due to an increase in market prices. For example, the chicken wing market is currently three times higher than normal. Schools are not able to pay these higher prices and are therefore forced to make substitutions. Products that schools are asking for are being delayed, and distributors then can't keep up with the changes schools are requesting to meet their needs, according to DESE.

The Jefferson City School District and other local districts are beginning to see the effects of these labor shortages and supply chain issues. JC Schools has had some limitations to the variety of foods it is able to purchase due to some items not being available.

Students will still be able to select between a variety of items, including a hot and cold item for their main entrée, and the district will continue to provide nutritious meals that meet United States Department of Agriculture standards, according to the district.

However, until this issue is resolved, the meals served for breakfast and lunch may be subject to change pending availability of certain food items and may vary from the posted menus. For example, tacos were recently on the menu at the elementary schools, but the kitchens prepared something else with ground beef instead, such as spaghetti, because the schools did not receive tortillas.

The school buildings have inventory they are able to use in place of previously planned meals. The district is working on additional solutions should these issues continue, Director of Nutrition Services Dana Doerhoff said.

"We have no way of knowing when these issues will be resolved, but we do feel confident that the alternative solutions we are working on will be sufficient in the meantime," Doerhoff said.

"However, the issues we are experiencing are originating more from the food supply vendors than from our local distributors who are continuing to work with us and assist in any way they can," Doerhoff said.

The Blair Oaks R-2 School District in Wardsville received notice Wednesday that its weekly Kohl Wholesale shipment would not arrive that week due to supply chain issues and an employee shortage, so the district purchased food from Sam's Club.

"We kind of had to scramble a little bit," Superintendent Jim Jones said.

This resulted in slight menu changes, such as chicken strips instead of chicken nuggets or bananas instead of apples.

"Nothing's being cut; all the nutritional requirements are being met," Jones said.

He said he doesn't think this will be a long-term issue for Blair Oaks, but there may be some weeks where the district will have to buy food from Sam's Club or other places instead. He said he expects to receive a food delivery from Kohl Wholesale this week.

The Cole County R-1 School District in Russellville has received some food later than expected, but it hasn't been much of a problem, Superintendent Perry Gorrell said. For example, some food items are usually delivered on Friday but were instead delivered on Monday - the day they were needed - because they arrived to the warehouse late.

The Cole R-5 School District in Eugene has also had problems receiving certain food items, according to district officials.

The national School Nutrition Association recently sent a letter to U.S. Department of Agriculture Secretary Tom Vilsack with recommendations on ways the department can ease pressure on programs struggling with supply chain disruptions, and DESE is working with stakeholders and government officials "to try to draw attention to the issue and explore ways to encourage food distributors to prioritize school customers despite these challenges," McGowin said.