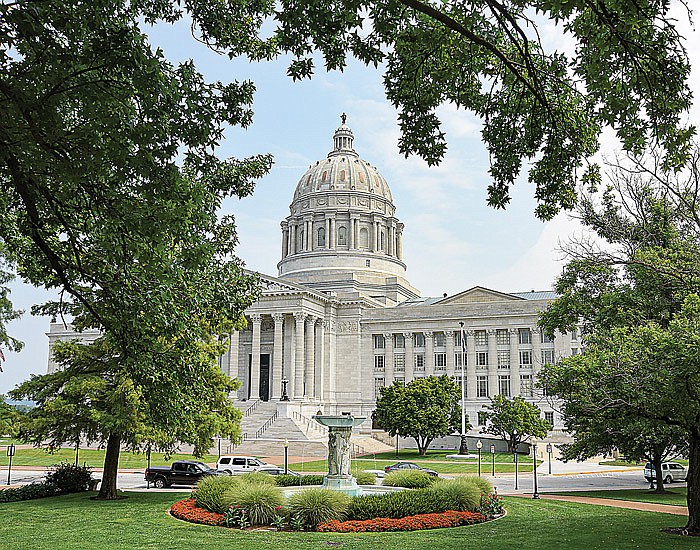 Facilities Management crews have been working on the state Capitol grounds to get them into top shape for Missouri Bicentennial celebrations in and around the building.

The Missouri General Assembly's upcoming veto session is likely to be a quiet one for the state Senate, party leaders said.

The Legislature will convene Sept. 15 for the 2021 veto session, used to review bills denied by the governor.

Senate President Pro Tem Dave Schatz, R-Sullivan, said Republicans have a couple bills being discussed independently ahead of the veto session, but he's expecting it to be fairly uneventful.

The legislation was an attempt to change provisions relating to property, income and sales taxes.

"I do know that there have been members calling around and having conversations on Sen. Koenig's bill, but we haven't really had an agenda, and obviously, we would still have communication with the House leadership and see if they have anything in particular they're looking at," Schatz said.

SB 226 was rejected by Parson on July 9 for a multitude of reasons, including language that created broad tax credits for property affected by "restrictive orders" and industry-specific language that would allow entertainment venues to keep sales and use taxes paid by customers.

"I understand section 139.305 was designed to narrowly target small, local businesses harmed by overly intrusive local health measures," Parson wrote in his veto letter. "However, the language of the bill is severely problematic."

Schatz said he intends to meet with House leadership soon and will probably speak to the Senate minority leadership to determine their plans.

If the Legislature acts on a veto, the process has to start in the chamber the bill originated from, and the original bill sponsor would make the motion.

Schatz said he isn't aware of what the House Republicans are considering.

"If there's something that we're going to override the governor on, it would have to be a consensus majority among Republicans that they would want to go down that path," he said.

Schatz said the Senate Republicans will likely have a caucus meeting at the start of the session to poll sentiment and hear from members about what kind of action to take, if any.

Schatz said he's spoken with the governor about his vetoes, and the general consensus within the party is that legislative issues can be worked out next session.

"There may be a conversation among our caucus on a couple of bills, but for the most part, I think we'll probably have to convene as a caucus and have those conversations to see where the mindset is," he said.

Parson didn't reject any bills handled by Senate Democrats, so they can't make an initial motion to bring up a veto for consideration.

"It's been relatively quiet about which ones are going to maybe be (overridden) or not. I haven't heard, really, of hardly any that are even going to be attempted to be overridden in the Senate at this point," Rizzo said. "We still have some time, a couple weeks I guess, before we go into veto session so I'm not expecting a long day, but we'll be ready regardless."

Rizzo said Democrats will be spending most of the session responding to Republican actions.

He said they will be monitoring which bills Republicans want to take up, considering them issue by issue within the Senate Democratic caucus and acting from there.

"Really, the ball is sort of in their court to make the motions on bills that were vetoed," Rizzo said.

The House and Senate are required to pass a measure by two-thirds majority to overturn a veto. Following approval by both houses, the bill is sent to the Secretary of State's Office as law.

The Missouri Constitution provides the House and Senate 10 days to solely consider bills rejected by the governor.