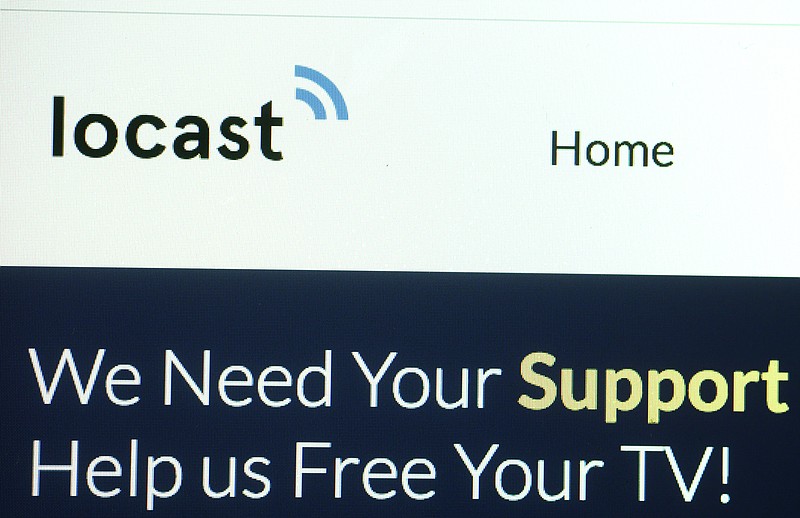 <p>In this Jan. 28, 2019 file photo, The Locast website is displayed on a computer screen in New York. Locast, a service that streamed local TV for free in nearly three dozen U.S. cities, is suspending operations, Thursday, Sept. 2, 2021, after losses in court against the broadcast industry. The owners of the country’s major broadcast TV networks — ABC, CBS, NBC and Fox — had sued Locast in 2019, saying Locast violated their copyrights, and asked for the service to be shut down. (AP Photo/Mark Lennihan, File)</p>

Locast, a service that streamed local TV for free in about three dozen U.S. cities, suspended its operations Thursday after losses in court against the broadcast industry.

The owners of the country's major broadcast TV networks - ABC, CBS, NBC and Fox - had sued Locast in 2019, saying it violated their copyrights, and asked for the service to be shut down.

Locast has held because it is a nonprofit, it found a legal loophole in copyright law - it can stream the networks of ABC, CBS, NBC and Fox without paying them. The companies that own the networks make billions annually in fees from cable companies that pay to include them in TV packages.

But a federal judge in New York ruled Tuesday that Locast isn't protected by that exemption from copyright law. He said Locast is effectively charging users and using that money to expand its service, which he said isn't allowed under the law.

While Locast was free, users who didn't pay $5 a month would get an ad every 15 minutes asking for a donation.

The digital rights organization Electronic Frontier Foundation, which has defended Locast in court, said the judge "interpreted the law in an artificially narrow way" and Locast was fulfilling Congress' mission to make sure Americans had access to their local broadcast stations.

Locast has been around for years but flew under the radar as new streaming services emerged that grabbed people's attention. It had more than 3 million users, EFF said.

"As a nonprofit, Locast was designed from the very beginning to operate in accordance with the strict letter of the law, but in response to the court's recent rulings, with which we respectfully disagree, we are hereby suspending operations, effective immediately," a the company said Thursday.

The legal case will continue, including an appeal, to resolve the remaining issues, said EFF attorney Mitch Stoltz. He did not specify what those issues are.

An attorney for the TV networks, Gerson Zweifach, declined to comment on Locast's shutdown Thursday. On Wednesday, he issued a statement on behalf of ABC, CBS, Fox, and NBC saying the court ruling was "a victory for copyright law." The networks filed for a permanent injunction to stop Locast operations Wednesday night.

The major broadcast networks are available free with a TV antenna, which you can buy for less than $10.