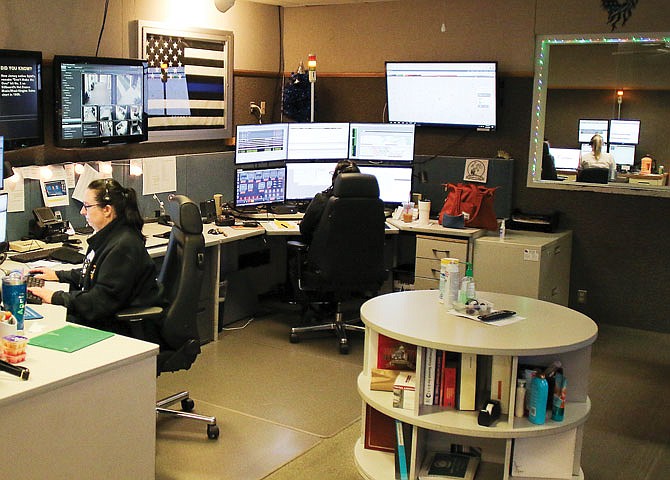 It may not be evident now, but passage of a public safety tax is important to the future in Jefferson City, according to city officials and public safety staff.

Jefferson City residents will vote Tuesday on whether to approve a quarter-cent public safety sales tax, which would go toward the police and fire departments.

The tax needs a simple majority to pass. If passed, collections would start April 1 and would bring in $2.8 million annually.

Jeremy Bowman, president of the Fraternal Order of Police, has said funds from the tax would help make wages more competitive and attain new equipment such as body cameras.

"The goals of the tax are competitive pay, competitive wages for recruitment and retention of officers," he said. "We recognize the technology world we live in, body cameras are essential. We support body cameras."

James Noah, vice president of the Local 671 union, has said his focus is for competitive wages at the fire department.

"We are quickly becoming a very young department," he said. "We've had a lot of retirement turnover, so we're losing a lot of experience, and we quickly found that we were a very non- progressive department (for salaries). One thing that has had a significant impact on is our recruitment."

Fire Chief Matt Schofield is seeking an additional fire house, which would mean more equipment and staff, and the sales tax could go toward equipment and staff for the house if passed, Noah said. While there are potential equipment and facility needs, firefighters are focused on adjusting the pay scale, he said.

How does Jefferson City stack up?

Public safety officials said wages aren't competitive, and the departments have fewer job applicants than they did in the past.

Based on salary comparisons provided by the city, the Jefferson City salaries appear to be in the middle of the pack.

According to Missouri law, proceeds from a city's public safety sales tax can be used for expenses "including but not limited to expenditures on equipment, city employee salaries and benefits, and facilities for police, fire and emergency medical providers."

Carlos Graham, co-chairman for the JC Citizens for Public Safety and former Ward 4 councilman, has said the tax funds would be on top of funding that public safety already receives through the city's general fund and Capital Improvement Sales Tax money.

"This tax is not to supplant other budget line items," Graham has said. "This is strictly for public safety use."

Ward 5 Councilman Jon Hensley, who attended a forum in support of the tax Thursday night, agreed.

"The plan, stated several times, is this a dedicated fund within the general fund for public safety," he said. "This money is going to be sequestered within (the general fund) and we'll be able to track it all throughout every year."

Over the next five years, the two departments combined will receive $5.6 million from the city's half-cent Capital Improvements Sales Tax H, which voters extended in August.

Unlike the Capital Improvements Sales Tax, which voters revisit every five years, the public safety sales tax would not have a sunset and therefore would not be re-voted on after a set number of years. It is permanent.

Graham said the omission of a sunset goes back to where the funding would go.

"You're dealing with personnel and salaries," he said. "I don't know of any tax out there strictly tied to salaries where there's a sunset. As you can imagine, if a sunset was put on there and for some reason down the line it didn't pass, it's going to be more chaotic than anything."

How prevalent are public safety taxes?

The measure on the ballot would add a quarter-cent dedicated public safety sales tax for police and fire to address wages, equipment and potentially buildings.

At least 20 other Missouri cities have some form of a public safety sales tax, but they don't all look the same.

For instance, Cape Girardeau - which is slightly smaller than Jefferson City - has a quarter-cent fire protection sales tax that goes before voters every 20 years.

Joplin has a 2-cent stacked sales tax. While it is all general sales tax, a half-cent of it is earmarked for public safety purposes. It does not have a sunset.

Meanwhile, Columbia does not have a dedicated public safety sales tax.

Neither do the state's biggest cities - Kansas City, St. Louis and Springfield.

Who decides where the money goes?

Like other tax revenue, money from the public safety sales tax would come monthly to Jefferson City through the Missouri Department of Revenue.

Margie Mueller, city finance director, said the money would go into a separate fund specifically for it. Then, in order to use the funds, a request would go through one of the City Council committees and then the full City Council.

"Those discussions will happen through council," she said. "If there's going to be percentages or just flat dollar amounts to go to personnel services versus equipment versus whatever else they're going to spend the money on."

Since collection would start in April, the council would have several months for those conversations.

Some Missouri cities with a public safety sales tax also have an oversight committee of area residents.

Belton, which passed a half-cent tax in 2018 without a sunset, has an oversight committee that meets twice a year to review tax revenue and uses.

Mayor Carrie Tergin said forming an oversight committee hasn't been discussed yet. But should the tax pass, it could be talked about in the months before the city starts collections on the tax, she said.

Mueller said the public safety sales tax fund will become part of the general revenue and won't require an administration fee because only enterprise funds - such as airport, parking and transit funds, and funds for special departments, like parks - require administration fees.

Does a need exist?

While the proposed public safety tax doesn't have organized opposition, critics of it said the city should be able to pay for the services it has and wonder why the tax is necessary.

Tergin said it's about looking to the future.

"When you look at our budget, we have a lot of public safety needs that we need to meet," she said. "We currently have really stretched our budget and public safety as much as we really can. In order to continue to provide the services, however, we know that most communities our size do not rely solely on general fund to fund their public safety."

During this past budget cycle, the city budget committee funded public safety funding requests such as 13 police vehicles. However, many requests went unfunded.

Unmet requests included police body cameras and storage for the recordings, updated software for animal control, six additional firefighter positions and replacing the Hyde Park burn building, which was used for training but is now not operational.

"We realize that these are expenses that we need to be competitive," Tergin said. "We need to make sure that we continue to fund what we currently need as well."