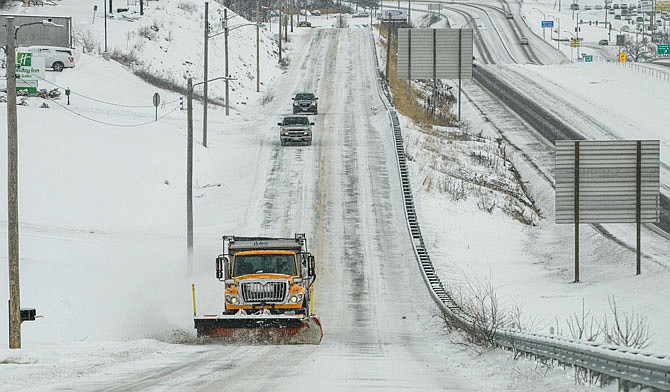 A plow truck driver from MoDOT clears the westbound lane of Jefferson Street in Jefferson City on Wednesday morning, Feb. 17, 2021.

With the first day of winter 60 days away, the Missouri Department of Transportation's biggest worry may not be when the first snowfall will arrive, but rather if it will have enough drivers to push the snow off the roads.

Faced with high staff turnover rates and many vacant positions, MoDOT officials said training is more critical than ever. On Thursday, the highway department held its annual winter operations drill in which it evaluates the condition of its equipment and trains employees for their winter road-clearing duties.

"With nearly 20 percent of our plow operators with less than one year of experience, this training drill is important to be ready when snow flies," said Becky Allmeroth, MoDOT chief safety and operations officer. "One of the most valuable parts of the drill is it allows our newest employees the opportunity to drive a snowplow over their designated routes so they are aware of curbs and raised islands that might be hidden in snow or ice."

MoDOT Director Patrick McKenna said they have not made progress filling the winter operations vacancies despite the department's best efforts. Additionally, the department is experiencing record high turnover, including more than 70 employees leaving every month for the past six months.

"We are several hundred employees below what we need in order to cover more than one shift in a statewide storm," McKenna said. "If a widespread winter storm lasts more than one 12-hour shift, we will not have enough employees to fill all the trucks on the second shift, and therefore it will take longer to clear the roads."

As part of the drill Thursday, MoDOT employees reacted to a simulated forecast of significant snow for the entire state. The department's emergency operations centers activated and maintenance employees were deployed to their trucks.

When asked if Central Missouri is better or worse than other parts of the state for staffing shortages, Allmeroth said staffing vacancies in all areas across the state are very fluid.

"In years gone by, it has been more of an urban situation where we had gaps to fill," he said. "But in the last five years, especially this year, I can honestly say there is not a spot in the state where we are not trying to fill.

"It really is a competition for drivers with a CDL (commercial driver's license). We're competing against companies getting ready for the holidays who deliver packages and shipping goods along with other communities trying to fill their operations for winter. With very low unemployment rates, those drivers just aren't there."

Allmeroth said they have been strategizing for the past few months, assuming they wouldn't be able to fill all the positions they would need.

"With a gap of several hundred people, we've been looking at the question, 'What will we do if a big snow storm hits the state, especially if it lasts more than 12 hours or more than one shift,'" Allmeroth said. "We know we couldn't fill every truck for the second shift, so there will be trucks that will be parked."

Allmeroth said they will look at each storm on a case-by-case basis to see the timing of the storm.

"It's usually more effective to have those trucks moving when the sun is shining and we can make more progress," Allmeroth said. "Likely, if we have a multi-day storm, you'll see more trucks sitting at night."

Knowing where their largest service gaps are, Allmeroth said, they have been strategizing how to bring help to them.

"If you're hit by the flu or COVID or whatever the issue, we'll have neighboring crews coming to help them out," Allmeroth said. "If a storm would only hit a section of the state and they need help, we'll move crews from other areas to help out."

The top priority for MoDOT in a snowstorm is clearing all interstates and higher volume highways.

Despite the labor challenges, priorities and objectives for how they handle a snow storm have not changed, Allmeroth added.

"We'll still clear the 5.6 million miles of road we usually do in winter. But this year, it will probably take us a little longer to accomplish that," Allmeroth said. "We typically strive to have roads back to near-normal conditions after the storm has stopped, usually in three to four hours. This year, it will probably take us six to eight hours on major roads and an extra 12-24 hours on some of the minor roads."

Allmerouth said they are really looking for people who run large landscaping equipment in the summer or farmers who have their CDLs that could be trained fairly quickly.

"You could name your hours," Allmeroth said. "Just let us know when you're available. We can use part-time and full-time workers."

A couple of years ago, as a way to try and get more drivers, Allmeroth said they decided to give a market adjustment for winter operations. For entry level drivers, it's an additional $3 in rural areas to make it a little over $18 an hour and additional $6 in urban areas to make it over $20 an hour.

Cole County officials said their road crews are fully staffed, and they didn't foresee issues with their workforce during the winter. Public Works Director Eric Landwehr said as far as snowplow drivers, they hire part-time truck drivers for additional help, mainly in the overnight hours of a storm. Landwehr added that he believed hiring will continue to get more difficult due to more competition.

For Jefferson City streets, seasonal staffing is less of an issue since the city relies on its regular full-time staff for road-clearing duties, according to Britt Smith, Jefferson City operations director. He added that they have been working to fill some openings due to staff turnover, and they saw a steep decline in the number of applications for the positions over previous years.