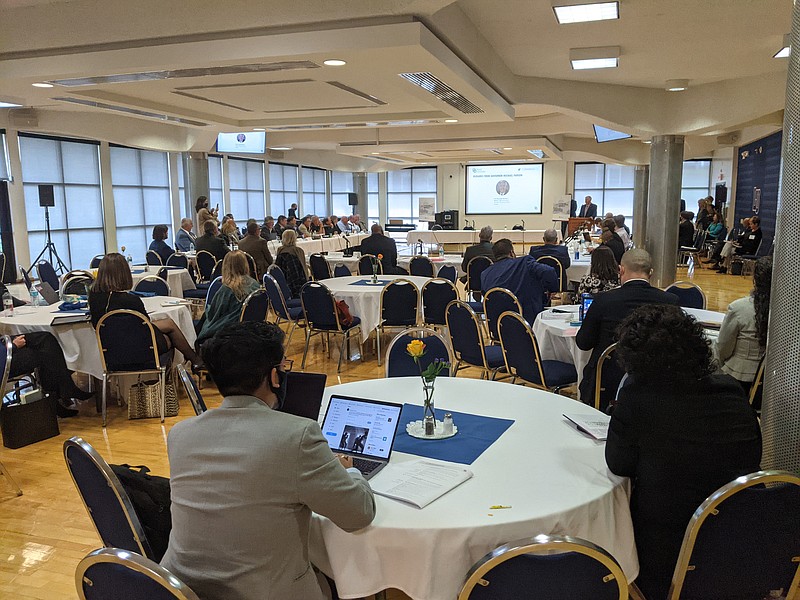 Gov. Mike Parson addresses legislators and educators at the fourth annual Legislators Retreat Thursday. The two-day retreat is focused on COVID-19's impact on education in Missouri. Photo by Ryan Pivoney

To shape a better Missouri, legislators attending a retreat at one of Missouri's universities heard they need to take a fresh approach to a major building block: Education.

The two-day event, which was virtual last year, is sponsored by the Hunt Institute and brings together Missouri's legislators working on education and workforce policies and state and national education experts to discuss statewide education issues.

This year's focus is on the COVID-19 pandemic and its impact on education, as well as how funding and innovation will play a part in recovery.

After setting a vision and hearing from Zora Mulligan, Missouri commissioner of higher education, and Margie Vandeven, commissioner of the Missouri Department of Elementary and Secondary Education, about departmental goals and priorities, retreat attendees began discussing the state's approach to early childhood governance and the newly established Office of Childhood.

"If you was truly going to change the needle in the state of Missouri, it had to start with the kids," Parson said at the retreat.

The governor said previous solutions often boiled down to pouring more money into education and hoping it would work, but it instead often created more bureaucracy and a less efficient system.

He pointed to recent efforts to reorganize the Missouri Department of Economic Development, which resulted in the department with more than 800 employees dropping to less than 200, as a success story.

Parson said the legislators need to become comfortable with change and he expects to see rewards from the Office of Childhood consolidation shortly.

"I am very proud of, and grateful for, the four-year partnership we have had with The Hunt Institute," Kehoe said in a news release. "Following the disruption of the past 19 months, it is imperative that our legislators listen to, and learn about, the most pressing issues affecting students from pre-K to post-secondary. I look forward to continuing to build upon our state's capacity of ensuring that all Missouri students receive a high-quality education."

The retreat continues today, beginning with talks on the challenges and opportunities associated with recruiting and retaining teachers, followed by a discussion on the politics and policy behind creating an inclusive K-12 curriculum.

The retreat's final session revolves around COVID-19's impact on higher education enrollment, including best practices and strategies for identifying and supporting students as they transition from high school to college.

Lincoln Interim President John Moseley is one of two experts speaking during the session.

"It's exciting," Moseley said. "It's great anytime we can get our state legislators on our campus to see what it is that we're doing, even if they're here for their own meetings."

Moseley said he's looking forward to the discussions and helping inform state lawmakers about what's taking place in the world of higher education.

He said he'll be talking about some of the issues and challenges universities have experienced because of COVID-19, how teaching has changed as a result of the quick transition to online instruction and the greater presence of hybrid classes.

"I'll just kind of share what's taking place here at Lincoln and also try to include some of the challenges that many of our state institutions have faced," Moseley said.