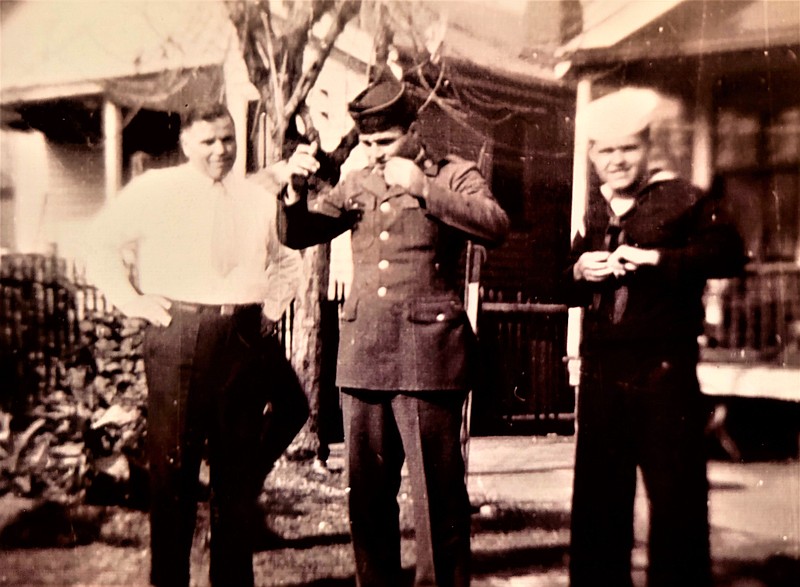 Mickey Garagiola spent nearly his entire life on the historic Italian district of St. Louis known as "the Hill," playing baseball with his brother Joe and neighbor Yogi Berra, both of whom went on to become catchers in the major leagues.

Although Mickey's fame would not come from professional baseball, he shared in a special bond with his friend and brother through military service in World War II.

Born Martin "Mickey" Joseph Garagiola in 1921, he was raised on Elizabeth Avenue on the Hill by parents who had emigrated from Italy. In 1926, his brother Joe was born and the two received their education through the local parish at St. Ambrose Catholic School.

Finishing his eighth-grade education in 1936, Mickey began making a living - and supplementing his family's income - by working for Henry Ruggeri, owner of the famed Italian restaurant aptly named "Ruggeri's."

In the early days of Garagiola's employment at Ruggeri's, " it was the hottest restaurant in St. Louis, hosting the likes of Frank Sinatra and his 'Rat Pack,'" stated the website of "Rose of the Hill," which now occupies the former Ruggeri's.

Mickey would work his way up from dishwasher to waiter at Ruggeri's. But shortly after the attack on Pearl Harbor, he became a member of the Armed Forces.

"On Sept. 16, 1940, the United States instituted the Selective Training and Service Act of 1940, which required all men between the ages of 21 and 45 to register for the draft," noted the National World War II Museum. "This was the first peacetime draft in United States' history."

Although weeks away from his 19th birthday, Mickey heard the accounts of the intensity of war growing overseas and realized his time to serve was approaching with his 21st birthday.

"I picked up some tidbits about his service when he spoke with others, but I really don't know much about what he did in the service," said Bob Garagiola, Mickey's son.

He made the decision to enlist in the U.S. Navy on Sept. 12, 1942, weeks before his 21st birthday. On Dec. 10, 1942, Garagiola was inducted into the U.S. Navy at the Naval Reserve Air Base at Lambert Field in St. Louis and classified as "V-6," or "General Service and Specialists."

Throughout the next few weeks, he received expedited basic training while at Lambert Field before reassignment to Naval Air Station (NAS) Banana River in the east central region of Florida. The base was commissioned Oct. 1, 1940, and initially used as a location to launch aircraft for in anti-submarine patrols along the coast.

The Museum of Florida History said the base grew to accommodate other wartime activities "including a blimp detachment, an Aviation Navigation Training School, an experimental training unit termed Project Baker, and a major aircraft repair and maintenance facility." Years after the war, the site became Patrick Air Force Base.

With nearly 3,400 military and civilian personnel serving at the NAS Banana River during the peak of its World War II operations, the Navy embraced Garagiola's experiences as a waiter on the Hill by assigning him as a cook's assistant in the base mess operations.

His younger brother, Joe, had become a celebrated prospect as a catcher for the St. Louis Cardinals. That, however, did not prevent him from being drafted into the U.S. Army in 1944. He went on to play baseball to help entertain his fellow troops.

The Crusader Clarion, a Hill area newsletter that provided updates on local men in the service during World War II, wrote Mickey and Joe Garagiola were able to return home on leave in November 1944, and meet up with old friends - at least those who had not been drafted or enlisted.

The Navy later transferred Mickey to Alameda, California, where his culinary skills were used to support feeding the pilots and ground crews assigned to the Headquarters Squadron of Fleet Air Wing 8.

"We thought for a while last month that Clark Gable had joined the Navy, but it wasn't Clark Gable at all, it was our own Mickey Garagiola, home on a furlough last month with a Clark Gable mustache," the Crusader Clarion humorously reported Jan. 31, 1945.

Mickey Garagiola eventually transferred to the United States Naval Hospital in Oakland, California, before returning to the Naval Air Station in St. Louis. On July 11, 1945, he received his honorable discharge from the U.S. Navy at Olathe, Kansas, having achieved the rate of Seaman First Class.

Returning to the Hill, Garagiola married the former Adele Riva and raised two sons, Robert and John, in addition to a daughter, Martina.

"When he wasn't waiting tables at the old Ruggeri's restaurant, or serving as an unofficial ambassador for the Hill, where he grew up, you'd see him on TV hosting the old 'Wrestling at the Chase' show," the St. Louis Post-Dispatch printed in its Aug. 31, 2010, edition.

The 88-year-old veteran died Aug. 29, 2010, and was laid to rest in Resurrection Cemetery in Affton, the same cemetery where his parents and younger brother are interred.

Bob Garagiola said much of his father's life experiences have been captured in print, but his military time has always remained something of a mystery since it was a conversation topic they never shared.

"I wished that I would have sat him in a chair and said, 'Now tell be about your Navy service,'" said Bob.

He added, "And although I may have missed that opportunity, it is a comfort to have some information to pass on to my children about the World War II service of their grandfather."