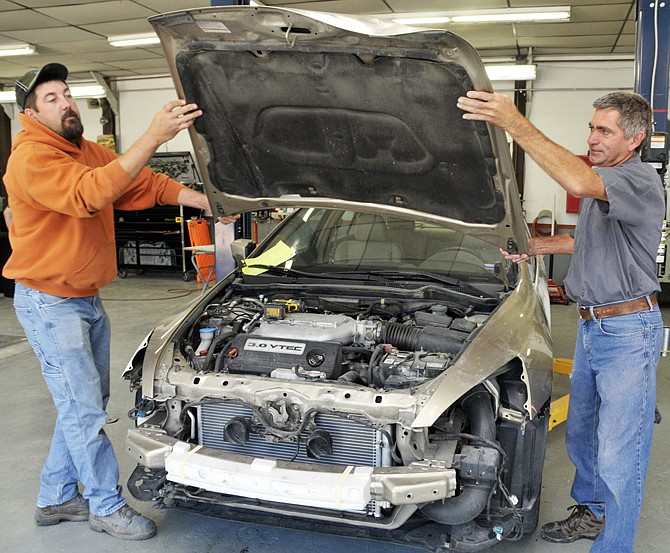 In this October 2013 photo, auto body technicians Lance Wolters, left, and Rich Eichholz remove a damaged hood from a vehicle after it was brought to Kemna Collision Repair. The vehicle suffered damage in a collision with a deer.

As the season changes and wildlife becomes more visible, the Missouri Department of Transportation is reminding motorists to watch the roadways.

Missouri is ranked 15th in the nation for potential deer collisions, according to a report from State Farm Insurance.

With the breeding season occurring in the fall, deer are more likely to be on the move and around roadways.

"As the days grow shorter, more motorists are driving on dark roads when deer are more active," said Natalie Roark, MoDOT state maintenance director. "This leads to a larger number of crashes involving deer and other wildlife from mid-October through the end of November."

MoDOT does not recommend swerving to avoid wildlife on roadways as it can result in the loss of vehicle control. The department recommends using caution and scanning both sides of the road when driving.

If a driver cannot avoid a collision and strikes a deer, MoDOT recommends notifying the department so crews can address debris that is considered a safety hazard. If the animal carcass is in the driving or passing lane or on the shoulder, crews will move it to the outer portion of the right of way.

If the carcass is on the shoulder, work crews will address the deer during normal work hours as it is not considered a safety hazard.

If the deer carcass is not on the roadway, MoDOT will not pick it up unless it obstructs mail delivery, is in a neighborhood or near a bus stop.

Missouri also allows individuals with a wildlife dispensation permit to keep the deer carcass, as they have written authorization to possess the deer granted by a Missouri Department of Conservation agent. The permit is free and can be obtained through MDC.

To report roadway safety hazards, including deer in the driving or passing lane, notify MoDOT at 1-888-ASK-MODOT.