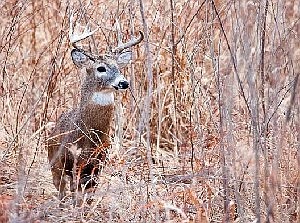 Missouri Department of Conservation hunters will be equipped with more than just firearms and ammunition this hunting season.

The department will be using hunters it has on staff to collect nasal, blood and lymph node samples from white-tailed deer they shoot this hunting season.

The samples will go toward learning about COVID-19 in the state's deer population.

Following a United States Department of Agriculture study completed in August, the Missouri Department of Conservation is in the early stages of planning to assess COVID-19 exposure in the state's white-tail deer population.

The USDA study, which tested for SARS-CoV-2 antibodies in white-tailed deer in Illinois, Michigan, New York and Pennsylvania, showed certain deer populations had been exposed to COVID-19.

"We have looked at this issue as an agency and determined that we think it's important to take a look at Missouri's deer with some sampling in our own state," said Jasmine Batten, wildlife health program supervisor at MDC.

Batten said the department is still planning how to test the deer and get a handle on surveillance within the state.

The department is not facilitating samples from the public at this point and will ask its staff who hunt to voluntarily collect samples.

Joe Jerek, news services coordinator for MDC, said MDC has hundreds of staff members who are avid deer hunters, so the current focus is on them collecting samples instead of the public.

"When a hunter harvests a deer, as they field dress that, we're going to ask them to take nasal swabs and provide them with the tools they'll need for that, and also get a blood sample and also collect lymph nodes," Jerek said.

Batten said the department doesn't currently have an exact number of samples to collect, but it will likely be testing less than a few hundred deer.

After collecting the samples, Jerek said the MDC staff hunters will keep the deer as they normally would.

According to the USDA's latest study on white-tailed deer, there is no evidence people can get COVID-19 from handling or eating the meat of an infected animal.

"Everything we know about the virus suggests that its primarily a respiratory transmission path in humans - there's no evidence that COVID-19 can be gotten from preparing or eating food and so that would include game or venison," Batten said.

Batten said MDC doesn't have its own diagnostics lab so it partners with labs at other agencies to conduct disease surveillance testing.

While the USDA searches for more funding and creates a plan for surveillance, Batten said it's too early to determine which lab the samples will go to but the USDA remains the primary choice.

"There's several larger efforts that are going and our plan right now is to plug into one of those," Batten said. "Right now (the USDA) is waiting to find out about funding, but if and when they give the call for states to contribute samples, we want to be ready and have those samples in hand."

No COVID-19 testing has been done on Missouri's white-tailed deer population yet, Jerek said, so the department doesn't currently know if any deer in the state have been exposed to the virus.

The USDA's study results, however, suggest it could be a possibility.

Of the 481 deer samples collected in Illinois, Michigan, New York and Pennsylvania between January 2020 and March 2021, 33 percent were found to have SARS-CoV-2 antibodies.

The results varied by state - ranging from 7 percent of 101 samples in Illinois to 67 percent of 113 samples in Michigan - and the USDA warned they should not be extrapolated to represent the presence of COVID antibodies in entire deer populations.

The study also found no evidence deer were significantly contributing to the spread of COVID-19 in humans. Based on available information, the study results said, the risk of animals spreading the virus to people is low.

"White-tailed deer are susceptible to SARS-CoV-2, are abundant in the United States (approximately 30 million), and often come into close contact with people," the USDA study results said. "Given these factors, we felt it prudent to further investigate SARS-Cov-2 in wild deer. Studying the susceptibility of certain mammals, such as deer, to the SARS-CoV-2 virus helps to identify species that may serve as reservoirs or hosts for the virus. It also helps us understand the origin of the virus and predict its impacts on wildlife and the risks of cross-species transmission."

While it wasn't the focus of the study, there were no indications deer exposed to SARS-CoV-2 became ill.

The study also did not determine how deer were exposed to the virus, but suggested possibilities could include exposure from people, the environment, other deer or other animal species.

The study results indicate more research needs to be completed on the significance of the antibodies in free-ranging white-tailed deer - like determining how the deer were exposed and what potential impacts are to overall deer populations, humans and other wildlife.

In August, the USDA's Animal and Plant Health Inspection Service said it would be working with federal and state partners, including the U.S. Department of the Interior and Centers for Disease Control and Prevention, to determine next steps.

Gail Keirn, a spokesperson for the Animal and Plant Health Inspection Service, said the department is currently developing a framework for future surveillance of COVID-19 in susceptible wildlife, but no specific plans have been finalized at this time.

A public comment period on the plans is open until Oct. 8.

Jerek said Missouri will continue testing for Chronic Wasting Disease with its regular processes and will share any news from the USDA testing with hunters as appropriate.

Batten stressed, however, the department is still early in the research process.

"We really don't know what it means at this point, but we're just taking the first steps to better understand this disease as it evolves and what, if any, implications it might have for wildlife," she said.