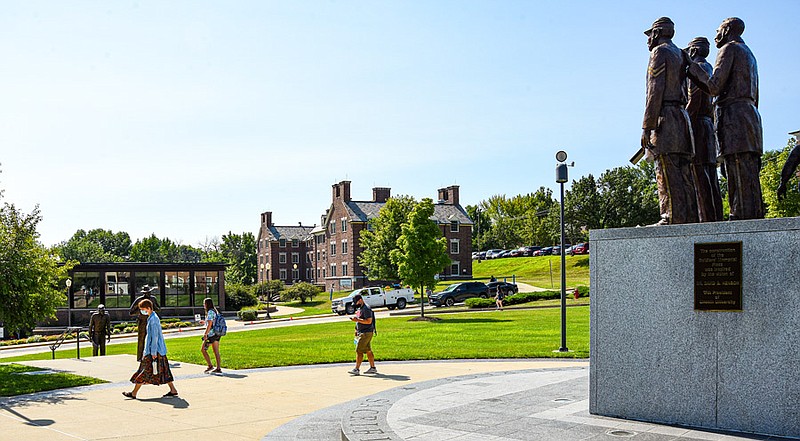 Lincoln University's enrollment slump is nothing new, but a statewide comparison of college enrollment data in Missouri shows it is now among those with the biggest declines.

Lincoln has seen a drop in enrollment every year since 2014, when there were 3,117 students on campus. Its current enrollment is 1,415 students.

The Missouri Department of Higher Education and Workforce Development released 2021 enrollment data for each of the state's institutions of higher education earlier this month.

The number of students enrolling in Missouri's four-year public colleges has fallen 14.6 percent during the past five years and fell 2.6 percent, or 2,683 students, from last year.

Lincoln University's enrollment has dropped by more than a third in the past five years.

For the most accurate comparison between institutions, MDHEWD looks at a university's full-time equivalent (FTE) enrollment as opposed to a simple headcount.

In 2016, Lincoln had an FTE enrollment of 2,160 students. That number has been steadily declining until its current standing of just above 1,400, which is a 34.5 percent decline within the past five years.

Lincoln had the biggest five-year decline in headcount and the second biggest decline in FTE out of all public four-year schools in the state. Truman State University leads the state in five-year FTE enrollment decline at 36.3 percent.

The University of Missouri-Columbia, by comparison, has seen an FTE enrollment decline of 7.3 percent during the past five years. Its headcount had dropped 5.5 percent since 2016.

Unlike Truman and Missouri Southern, however, Lincoln is the second smallest university in the state. It's enrollment is just more than 350 students above that of Harris Stowe State University, Missouri's smallest four-year school with a little more than 1,000 students this year.

Despite its small size and declining enrollment, Lincoln is at the top for state spending per student.

In fiscal year 2021, the state appropriated $15,833 per FTE to Lincoln, which was more than any other school in Missouri, according to the Missouri Budget Project.

Historically, Missouri hasn't appropriated funds to colleges based on enrollment.

In 2014, the state passed a law requiring at least 90 percent of appropriation increases be distributed based on performance measures while the remaining 10 percent can be used to address per-student funding inequities.

Darius Watson, interim dean of enrollment management, said earlier this fall while the nearly 11 percent decline in a year is troubling, Lincoln has been working on solutions to turn the tide.

"Obviously, we're disappointed over the enrollment decline, and we understand that it's part of a worrying trend that has impacted Lincoln here for years," Watson said. "That said, we are actually extremely proud of what we've done to try and reverse some of those trends."

Watson said administration has made enrollment a top priority and is committed to making in-depth changes at the necessary pace to see some return as early as next fall.

The university's solution to enrollment goes beyond administration, he said, as interim President John Moseley has been engaging faculty, staff, students, alumni, community members and representatives from other universities in the discussion.

In addition to a few changes already made to increase Lincoln's enrollment - like an overhaul of its academic scholarship system and clearing existing student balances - the university is changing how it engages in recruiting with more data-driven strategies.

Starting this year, Moseley said five coaches are recruiting more than just student-athletes from local high schools, which is where the university has traditionally received many of its students from.

"Coaches are natural recruiters," Moseley said. "They already sell their programs and so now they're just selling the university to a greater number of students."

With the nature of their schedule, Moseley said, the coaches can easily be out recruiting students without it interfering with their work day.

The rest of the university's recruiting staff is used to recruit from other high return areas, like the St. Louis and Kansas City metro areas.

Moseley said the system has been receiving positive reviews from local schools, who have welcomed a heavier Lincoln presence on their campuses.

"We're hopeful," he said. "It's a matter of planting the seed right now even though you won't see the fruits of it until next fall and potentially the next few classes after that."

Watson said he's also been focused on linking enrollment and retention together, so the university not only brings more students to campus but keeps them there.

"In this office, one of the things I'm trying to do is move away from the idea of recruiting immediate freshmen or new freshmen and really concentrate on the idea that I'm recruiting future alumni," Watson said.

It's part of a larger vision in which the university improves where it's going, not just where it's at, he said.

Those efforts, Watson said, should set the university on a new path.

"We're working to overcome the past for a brighter future," he said. "I'm excited. As many things as we have on our plate, as many processes and things we're trying to improve, I'm excited about the direction that we're going."

The university's multi-year enrollment decline won't be undone by next fall, but the administration is hopeful that by changing certain approaches and processes it will see some returns next year.

Lincoln is banking on an increase in enrollment to help cover a $3.4 million budget gap with some additional tuition dollars next fall. Without additional students on campus, the university will be relying on reserve funds or the chance the state Legislature appropriates extra core funding.