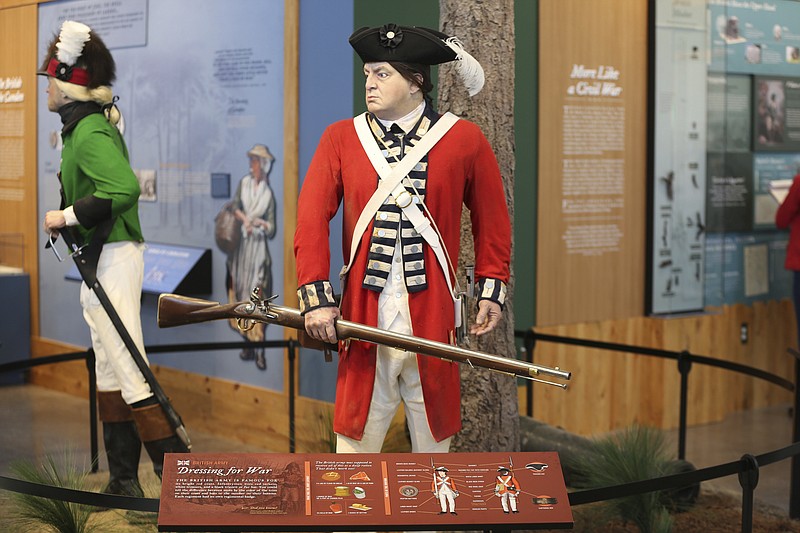 A exhibit of a British soldier is displayed at the Revolutionary War Visitor Center, Friday, Sept. 24, 2021, in Camden, S.C. The center was opened this year to capitalize on the upcoming 250th anniversary of the war as South Carolina promises to tell the full story of its role from the Founding Fathers to slavery. (AP Photo/Jeffrey Collins)

CAMDEN, S.C. (AP) — South Carolina sees the upcoming 250th anniversary of the American Revolution as a chance to remind people the state played a huge part in winning the nation’s independence, even if it did try later to tear the United States apart in the Civil War.

The state has opened a new Revolutionary War center, and released an app for mobile devices that explores some 200 sites of battles and other key events, including remote swamps where patriots and loyalists skirmished in the War of Independence.

Organizers promise this anniversary won’t all involve hero worship of the Founding Fathers and won’t turn a blind eye to the slavery that steered South Carolina’s history for 400 years.

Or, as South Carolina’s pre-eminent historian Walter Edgar said: “It’s important to tell everyone’s story. It’s not just the people in the fancy knee britches and the powdered wigs.”

Congress commissioned the America250 Foundation five years ago to throw the “biggest, most inclusive commemoration in our nation’s history” on July 4, 2026, 250 years after the Continental Congress approved the Declaration of Independence in Philadelphia.

Inclusiveness is already evident in Massachusetts, which honored the anniversary of 1770’s Boston Massacre with “Reflecting Attucks,” an exhibit examining the life and legacy of Crispus Attucks. The son of a slave and a Native American was the first to die when occupying British soldiers fired on angry colonists.

Anniversary organizers in South Carolina, which is often remembered more for leading the Confederacy into secession, said the state can be proud of its role in turning a stalemated war into victory against the British, but it’s a story that can’t fully be told without including its treatment of enslaved people.

Many slaves fought for the British, who promised them freedom. Others stayed with their owners, who rewarded some by releasing them from bondage. Slaves were often used as spies and messengers, and South Carolina militias fighting for independence from Britain allowed up to one-third of their units to be slaves, but only in support roles like engineers or sailors and not as front-line armed troops, according to Edgar’s book, “South Carolina: A History.”

For most Black people, the founders’ soaring proclamation in the Declaration of Independence that “all men are created equal” did little to change their reality of oppressive servitude in the new United States. A quarter- century later, more than 100,000 people remained enslaved in South Carolina, even after 25,000 slaves were freed by the British. Some 5,000 more just disappeared. There were about 142,000 white men, women and children in the state in 1790.

The plight of slaves is acknowledged at the Revolutionary War Visitor Center, along with Native Americans on both sides of the conflict. Other displays show major players like the “Swamp Fox” Francis Marion, who thwarted plans by British Gen. Banastre Tarleton to decisively end the war. Marion’s men exhausted “Bloody” Tarleton’s troops, leading them on fruitless swampland chases, before French allies arrived and together they drove the British to surrender.

“It’s a case of trying to touch lightly on everything and then send people if they are really interested in the Revolutionary War to other sites that are going to go into more detail,” said the center’s director, Rickie Good.

There are thousands of stories to tell, and Good said the center’s goal is to open the door to as many of them as possible, by combining battlefield heroics with stories of common men and women who had to decide whether to join the revolution.

“A lot of people don’t want their heroes besmirched, I guess,” she said. “We call them heroes. They didn’t call themselves that. They were people. And they were good and they were bad and they did the best they could in impossible situations and in many ways I think they were just like we are.”

Ironically, the center is in Camden, not far from where British Gen. Charles Cornwallis’ forces routed the patriots in 1780 in the Battle of Camden, one of their worst defeats.

But South Carolinians then rallied, forming loose militias that ended the British goal of winning the war by winning the South. They pushed the loyalists north, into the trap that led to Cornwallis surrendering his entire army to Gen. George Washington.