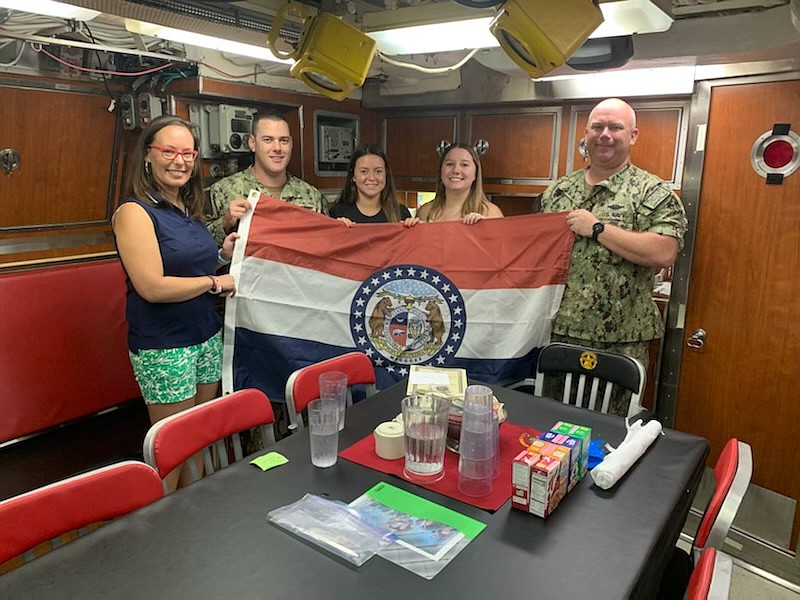 <p>Submitted</p><p>From left, Councilwoman Wiseman is shown with Lt. Cmdr. Eric Stinson, Claire Bonnot, Taylor Lalk and Chief of Boat Frank Cook. They are holding the Missouri flag that flew over the Capitol building on Missouri’s bicentennial day, which was gifted to the submarine.</p>

A Jefferson City councilwoman hand-delivered a Missouri flag flown over the state Capitol on bicentennial day to its new home, a submarine.

Ward 3 Councilwoman Erin Wiseman took a special trip to Pearl Harbor, Hawaii, over the weekend where she toured the USS Jefferson City submarine, met with crew members and delivered gifts — including the flag.

Jefferson City has supported the submarine as its namesake city since 1992. Crew members typically visit annually, but haven’t been able to since 2018 because of the 2019 tornado and COVID-19 pandemic.

The committee will also send the crew pictures, books and other Jefferson City memorabilia for the submarine, based on the crew’s needs.

While on vacation in Hawaii, Wiseman took the chance to visit the submarine in Pearl Harbor before it moves to its new home base in Guam next week. The move is coming after the crew spent seven years based in Pearl Harbor as the ship got upgrades and equipment renovations.

As part of the trip, she met with Chief of Boat Frank Cook and Lt. Cmdr. Eric Stinson, who gave the group the tour.

Wiseman said they did a quick tour of Pearl Harbor before going onto the submarine itself.

“We saw the control room,” she said. “Then we got to see where they slept, captain’s quarters, where they ate. They gave us quite a big deal of the ship.”

Since the submarine is getting ready to move, there are some areas they weren’t able to go, Wiseman said.

The best part, she said, was meeting some of the crew — including Missourians — and how welcoming they were.

“It was really refreshing because they were just all smiles,” she said. “Everybody that we saw on board had a smile, and they were so knowledgeable. We got to see a sailor from the Lake of the Ozarks, and that was really cool.”

Wiseman took several gifts for the submarine with her, including a Missouri flag, city coins, an aerial picture of the city and a signed picture of the City Council.

“It’s so special to us that the lieutenant governor helped us get that Missouri state flag that was flown over the Capitol during the bicentennial celebration,” she said. “I’m so lucky and grateful the mayor and lieutenant governor were able to help us out and get some really great stuff. I’m just very grateful for everybody who was involved in the USS Jefferson City.”

The relationship between the city and submarine is special, Wiseman said.

“If they asked us to do something for them, we would do it,” she said. “It’s just so exciting to have this crew, and they’re just such a wonderful crew.”

The crew is discussing a trip to Jefferson City within the next year and plans to invite city officials to the base in Guam once situated there.