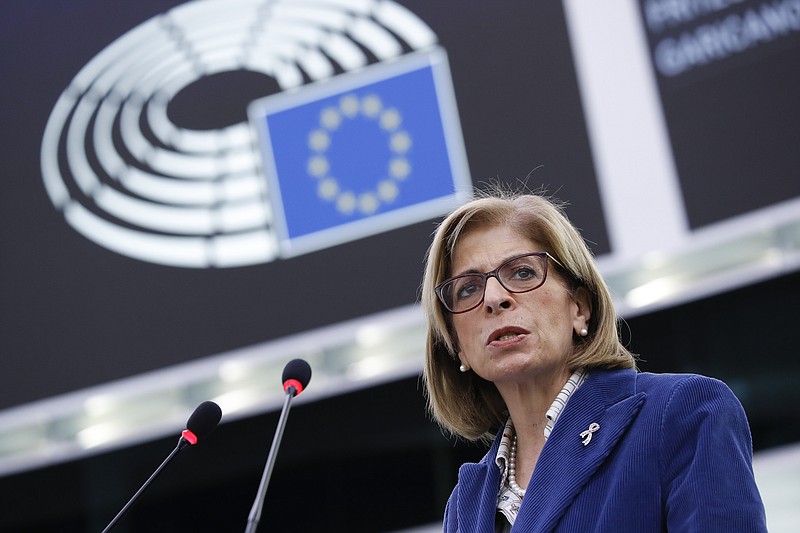 Commissioner for Health and Food Safety Stella Kyriakides delivers a speech on the EU's Role in Combatting the Covid-19 Pandemic and How to Vaccinate the Worl at the European Parliament in Strasbourg, Eastern France, Wednesday, Nov. 24 2021. (Julien Warnand, Pool Photo via AP)

BRUSSELS (AP) — The European Union said on Friday that it will ease its restrictions on exporting COVID-19 vaccines.

The Commission, the EU’s executive arm, said that as of January it will no longer require vaccine producers to request special authorization to export outside the 27-nation bloc.

Earlier this year when vaccines were still in short supply, the EU introduced a mechanism to keep some of the jabs it secured from AstraZeneca, the Anglo-Swedish drug company, from being diverted elsewhere.

The export control system, aimed at making sure large drug companies would respect their contracts, was used by the EU in March, when a shipment of more than a quarter million AstraZeneca vaccines destined for Australia was blocked from leaving.

When the dispute with AstraZeneca broke, the EU was lagging well behind the United States and other countries in COVID-19 vaccinations. According to Stella Kyriakides, the Commissioner for Health, the bloc has now vaccinated more than 65 percent of the total EU population of some 450 million inhabitants.

The EU and AstraZeneca said in September that they reached a deal to end their legal battle over the slow pace of deliveries of the company’s COVID-19 vaccines.

EU commission spokeswoman Dana Spinant said the “transparency of exports” will be ensured by a new monitoring mechanism that will provide the commission with companies’ vaccine export data.

Spinant noted the EU is the biggest global provider of COVID-19 vaccines, with more than 1.3 billion doses exported to more than 150 countries.

Amid a new significant uptick in infections in the EU, European Commission President Ursula von der Leyen said vaccinations need to be stepped up further.

“We need to convince more people to get vaccinated,” she said. “The good news is that we have enough vaccine doses. By the end of this week, Europe will have delivered 1 billion doses to our member states.”