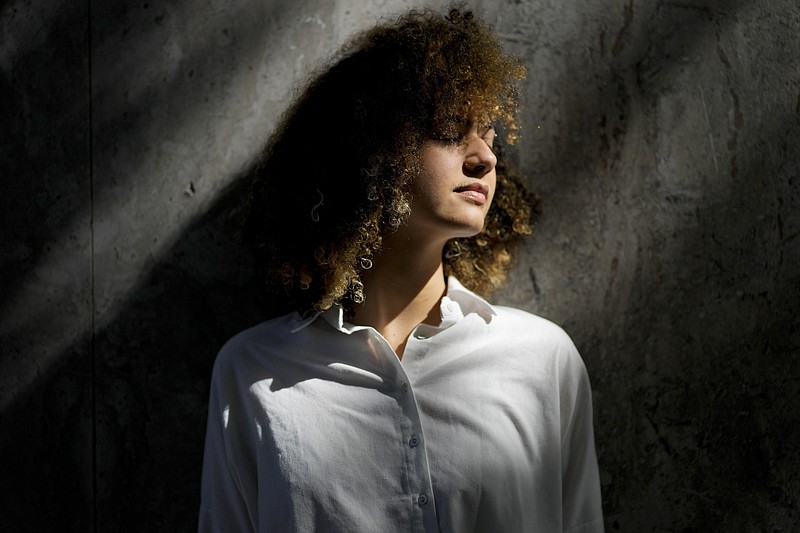 Julia Cohen Ribeiro poses for a photo in Buenos Aires, Argentina, Friday, Nov. 12, 2021. Ribeiro had never identified as anything other than Brazilian in her country of birth. Then at age 11, she was shocked when people on the street and in school in Buenos Aires insisted that she was Black. (AP Photo/Natacha Pisarenko)

BUENOS AIRES, Argentina (AP) — It wasn’t until Julia Cohen Ribeiro moved to Argentina that she discovered she was Black.

Her hair was curly, but her skin was light. She had never identified as anything other than Brazilian in her country of birth. Then 11, she was shocked when people on the street and in school in Buenos Aires insisted she was Black.

“I was never told I was Black growing up,” said Ribeiro, now a 25-year-old film student at the University of Buenos Aires. The daughter of a white mother and Black father, she has since embraced that identity and joined a burgeoning Afro-Argentine movement that seeks to eliminate the persistent myth that there are no Black people in the country and to combat discrimination against them.

The 2010 census recorded about 150,000 people of African descent in Argentina, a nation of 45 million, but activists estimate the true figure is closer to 2 million following a surge of immigration — and because many Argentines have forgotten or ignore African ancestry.

“It’s a very contested figure,” said Nicolas Fernández Bravo, an anthropology professor at the University of Buenos Aires who is part of an Afro-Latin American studies group and a government policy adviser. “The state doesn’t have the slightest idea of the number because measuring race is difficult and the state is not taking it seriously.”

President Alberto Fernández tripped over the issue in June when, speaking with the prime minister of Spain, he quoted an old local saying that offended many at home and abroad: “Mexicans emerged from Indigenous people, Brazilians emerged from the jungle but we Argentines arrived on boats. On boats from Europe.”

The backlash prompted Fernández to issue a sort-of apology on Twitter:

“Our diversity is a source of pride,” he wrote. “I did not mean to offend anybody but in any case anybody does feel offended or made to feel invisible, I apologize, of course.”

Argentine diversity once was obvious. In the early 1800s, as the slave trade — if not yet slavery itself — was being abolished, about a third of the population consisted of African slaves or their freed descendants. Even the tango — a dance tightly identified with the nation — has strong African influences.

But the country’s leaders made concerted, long-lasting efforts to Europeanize Argentina, welcoming millions white immigrants while downplaying and swamping the country’s Indigenous and African heritage.

Some said many Afro-Argentines died in mid-19th century wars where they were used as foot soldiers, the first casualties of battle, though other historians dispute that was the primary cause of the nation’s changing racial makeup.

Ribeiro is finishing a documentary about Maria Remedios del Valle, a Black woman who fought against the British invasion of the Spanish colony and later in the wars for independence in the early 1800s.

Afterwards, she was destitute until her military comrades rallied to her defense, calling her “The Mother of Argentina.”

“Hopefully, this will change the thinking in Argentina, make it more diverse, culturally richer and help fight racism,” said Ribeiro, who also leads a tour focused on Afro-Argentine history.

This year’s November celebration of African culture in Argentina is dedicated to the memory of Maria Magdalena Lamadrid — “La Pocha” — an Afro-Argentine activist who died in September. In 2002, the fifth- generation Afro-Argentine was kept from leaving the country by a customs officer who insisted there are no Black Argentines and asserted her passport was fake.

The country’s makeup has been changing again of late with a surge of newcomers from Africa and other nations.

Martinelli, who works as a housekeeper, later divorced her husband who returned to Senegal, but not before they had a daughter, Ammi. People would try to touch her because local lore has it that Black babies bring luck. It just made Ammi cry.

Ammi is now 12 and very shy, something her mother attributes in part to taunting from a classmate who often said, “We don’t want to play with you because you’re Black.”

In the northern province of Santiago del Estero, Emanuel Ntaka grew up as the son of an Argentine mother and South African father, hearing stories of rampant racism and violence in his father’s homeland. Today Ntaka is a musician as well as director of sociocultural programs for the national Ministry of Culture.

“That’s where it was born in me, the need to face injustice from what happened in South Africa,” Ntaka said. But he said he became more vocal after he was beaten up by skinheads in Argentina. It wasn’t so much the beating that affected him as the admonition to: “Go back to your country.”

He couldn’t get it out of his head.

“But this is my country,” he told himself. “I am Argentine.”

Ntaka helped organize this month’s events to celebrate Afro culture and is optimistic about the future, if also realistic. He said his 10-year-old daughter, too, had faced racist taunts at school.

Bravo said many upper-class Argentines remain ignorant about the problem of race.

“It’s changing,” he said, “but not long ago you would hear people saying we are not racist because we do not have Black people. Well, what’s the difference between the Ku Klux Klan and you?”