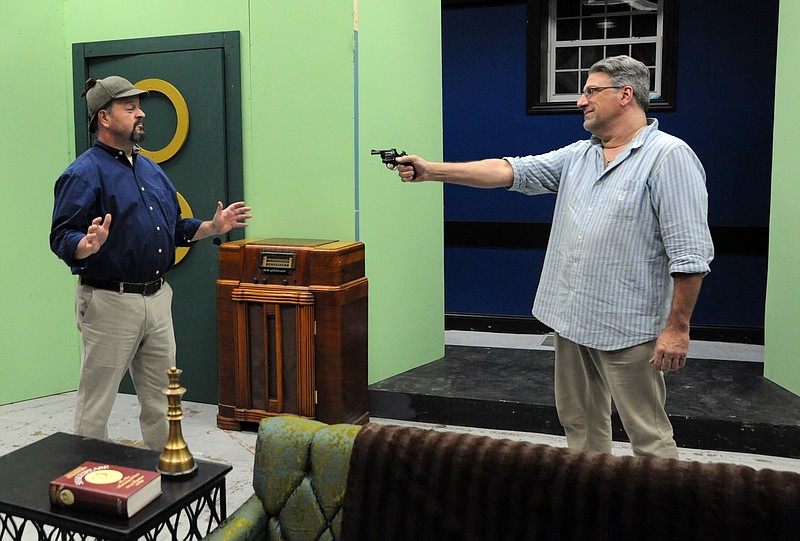 The Little Theater cast of "The Game's Afoot: Holmes for the Holidays." Shaun Zimmerman / News Tribune

Nothing says the holiday season much like a murderous whodunit in a medieval castle.

When a guest is stabbed to death during a holiday weekend getaway in 1936, hilarity and mayhem ensue to stop the killer before the next victim appears.

And who better to help solve a crime then Sherlock Holmes - or maybe the next best thing, William Gillette, a Broadway star known for his portrayal of the famous detective?

Claudia Scott, the show's director, said the play by Ken Ludwig is a bit of a spoof on William Gillette, who was an American actor, playwright and stage manager in the late 19th and early 20th centuries who actually did have a medieval castle in Connecticut before his 1937 death.

Integrating some of Gillette's eccentric style was key to the set design, Scott said.

The show's set mimics the medieval style, complete with weapons on the wall and "tricks and mirrors," though Scott was hesitant to give away too much.

"There's something really cool that's a set piece, but I don't want to give it away. It's too cool," she said. "We've been working on this for so long. People are going to love this. It's totally different; there's some physical comedy as well."

"The Game's Afoot" was meant to be part of last year's season at TLT, but one week before opening, a cast member got COVID-19. The theater board ended up canceling the rest of the season.

"The theater went dark, as they say," Scott said.

But when it came time for the 52nd TLT season, which opened with "The Wizard of Oz" in August, the board decided to put the Sherlock Holmes spoof back on the docket. And Scott was thrilled when all eight seasoned TLT actors in the cast were willing and able to pick up where they left off.

"Everybody was glad to get back at it," she said. "The actors have enjoyed it as well. It's all kinds of crazy fun; we just laugh ourselves crazy during rehearsals."

Tickets to The Little Theatre's "The Game's Afoot: Holmes for the Holidays" are $15 for adults and $10 for children younger than 12; they can be purchased at the box office or www.tltjc.org.

"It's going to be a great evening; it's family entertainment," Scott said. "There's gun shots; there's all kinds of suspenseful activities. And there will absolutely be some surprises."