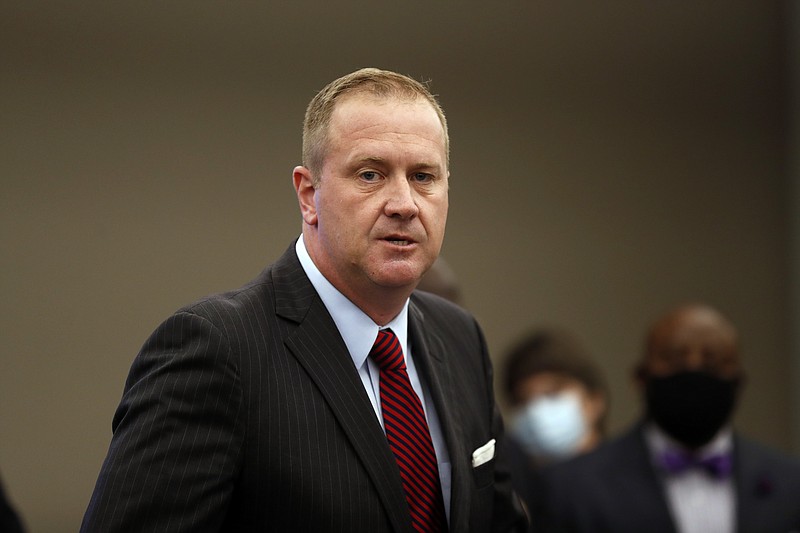 FILE - Missouri Attorney General Eric Schmitt speaks during a news conference in St. Louis on Aug. 6, 2020. A coalition of 10 states sued the federal government on Wednesday, Nov. 10, 2021, to try to block a COVID-19 vaccine requirement for health care workers, marking a new front in the resistance by Republican-led states to the pandemic policies of President Joe Biden's administration. "The mandate is a blatant attempt to federalize public health issues involving vaccination that belong within the States' police power," said the suit filed by Schmitt, a Republican who is running for U.S. Senate. (AP Photo/Jeff Roberson, File)

A coalition of 10 states sued the federal government on Wednesday to try to block a COVID-19 vaccine requirement for health care workers, marking a new front in the resistance by Republican-led states to the pandemic policies of President Joe Biden's administration.

The lawsuit filed in a federal court in Missouri contends the vaccine requirement threatens the jobs of millions of health care workers and could "exacerbate an alarming shortage" in health care fields, particularly in rural areas where some health workers have been hesitant to get the shots.

The suit follows similar ones by Republican-led states challenging new Biden administration rules that will require federal contractors to ensure their workers are vaccinated and that businesses with more than 100 employees require their workers to get vaccinated or wear masks and get tested weekly for the coronavirus. All of the mandates are scheduled to take effect Jan. 4.

Biden's administration contends that the federal rules supersede state policies prohibiting vaccine mandates and are essential to slowing the pandemic, which has killed more than 755,000 people in the U.S. But the New Orleans-based 5th U.S. Circuit Court of Appeals already has temporarily blocked the business vaccine rule, saying it raises "grave statutory and constitutional issues."

A separate rule issued last week by the federal Centers for Medicare & Medicaid Services requires COVID-19 vaccinations for more than 17 million workers in about 76,000 health care facilities and home health care providers that get funding from the government health programs.

The new lawsuit contends the CMS vaccine requirement is unprecedented and unreasonably broad, affecting even volunteers and staff who don't typically work with patients.

"The mandate is a blatant attempt to federalize public health issues involving vaccination that belong within the States' police power," said the suit filed by Missouri Attorney General Eric Schmitt, a Republican who is running for U.S. Senate.

Joining the lawsuit were the attorneys general of Alaska, Arkansas, Iowa, Kansas, Nebraska, New Hampshire, North Dakota, South Dakota and Wyoming. All are Republicans except for Democratic Attorney General Tom Miller of Iowa, whose state is led by Republican Gov. Kim Reynolds.

A CMS spokesperson declined to comment about the lawsuit.

As the payer for Medicare and Medicaid programs, the federal government already requires providers to comply with an array of quality, health and safety requirements.

"It seems fairly easy to me for a vaccination requirement to fit in with very garden variety conditions of participation," said Sidney Watson, director of the Center for Health Law Studies at Saint Louis University.

While announcing the rule, CMS said COVID-19 vaccine requirements by private health systems and previous vaccine mandates by states for other diseases have not led to widespread resignations of health care workers.

But the lawsuit contends that numerous health workers are likely to be fired, retire or quit rather than get vaccinated for COVID-19, which it said "jeopardizes the healthcare interests of rural Americans."

The lawsuit points to concerns from rural hospital administrators in Missouri and Nebraska. For example, it says that Great Plains Health in North Platte, Nebraska, is able to staff only about 70 of its 116 beds because of workforce shortages and has received notice from a majority of personnel in its behavioral health unit that they would resign rather than be vaccinated.

The Arkansas Department of Human Services has more than 1,000 unfilled positions at its health care facilities, and a vaccine mandate would worsen the worker shortage, said Arkansas Attorney General Leslie Rutledge.