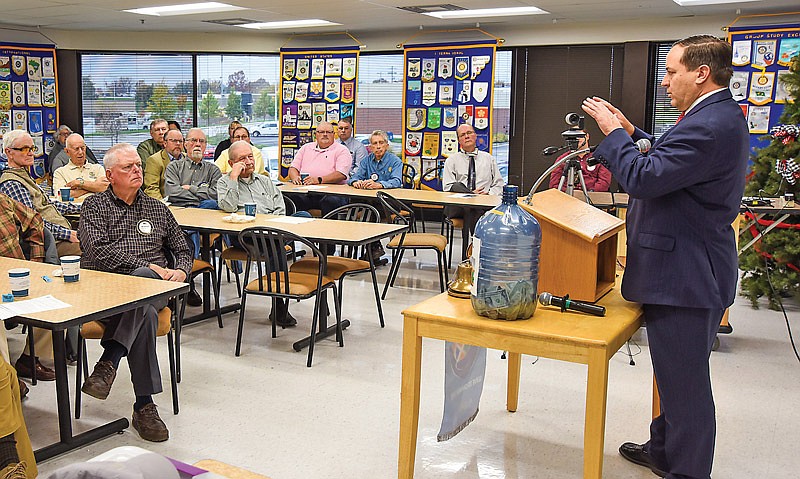 Missouri Secretary of State Jay Ashcroft spoke to the Rotary Breakfast Club of Jefferson City Wednesday, Nov. 10, 2021, during which he covered a number of topics, including ballot types and the initiative process. The group meets on Wednesdays at HyVee for breakfast and frequently invites speakers to the address the gathering.

Speaking Wednesday morning to the Rotary Breakfast Club of Jefferson City, Ashcroft addressed redistricting and election reforms he would like to see coming out of the state Legislature in the upcoming session.

Following the 2020 census, the state is engaged in redistricting on three levels: for the state House, for the state Senate and for the U.S. Congress.

Congressional districts are decided by the state Legislature, and Ashcroft said it will be the most important issue the General Assembly takes up this session.

Ashcroft said legislators have begun talking about congressional redistricting, and he's interested to see what they decide.

Missouri has eight seats in the U.S. House of Representatives. Two are occupied by Democrats and the other six by Republicans.

"The biggest question there is whether Missouri will stay a 6-2 state, with six Republican districts and two Democrat districts, or whether they will go 7-1," Ashcroft said.

He said the state's political leaning has been changing during the past couple decades, which could provide reason to change the current districts for more Republican representation.

He said he's expecting a robust discussion on congressional redistricting, particularly in terms of how Missouri voters line up with current representatives.

"Just looking at my own position, I won statewide by 25 percentage points, which makes me say that it seems to me Missouri is a pretty Republican state," Ashcroft said. "So in that regard, if we were 7-1, I think that would probably do a better job of actually representing who the people of Missouri are in Washington, D.C."

Ashcroft said he's expecting a simple process in the House, but the redistricting bill might be subject to the politics of the Missouri Senate.

He said he hopes the Legislature makes a decision in January and doesn't extend the process into February or March.

Missouri House and Senate districts are created by Independent Bipartisan Citizens Commissions, which Ashcroft said is often a contentious process.

Ashcroft said he's more focused on how the House districts will shake out as he isn't expecting much to change with the state Senate districts.

"The Senate map probably won't have a whole lot of change to it, it doesn't change as easily because the rules are stricter on how it has to be set up with counties and whether they can be split or not," Ashcroft said.

He said he's expecting some changes to the House map, but said those will likely come down from the commission of appellate judges, as has happened for the past 30 years.

The commission of judges is used in the event the Independent Bipartisan Citizens Commissions don't agree on a map.

Ashcroft also addressed upcoming legislative priorities for his office, which are focused on initiative petition and election reforms.

He said there will be legislation introduced to increase transparency and visibility with Missouri's election process, as well as legislation addressing voter ID requirements, paper ballots requirements and preventing tabulation machines from connecting to the internet.

Also coming up this legislative session will be a lot of talk about initiative petition reform, Ashcroft said.

The initiative petition process allows Missouri voters to directly put issues on the ballot after collecting enough signatures and meeting other requirements set by the Secretary of State's Office.

Ashcroft described initiative petitions as a form of direct democracy that provides citizens the power to bypass the Legislature, but said he believes the legislative process is better.

"The idea of a hyper-direct democracy concerns me," Ashcroft said. "And it's not because I don't believe that the people should be involved. It's because I believe that our rights come from God."

Ashcroft said Missouri is in the super minority of states that allow the initiative petition process to change the state constitution with a simple majority vote, something he hopes to change in the upcoming legislative session.

The system allows a simple majority of voters to make permanent changes to state laws and the constitution, which Ashcroft said can be a dangerous system for voters in the minority.

He said he wants to raise the vote threshold by which an initiative would pass on a ballot.

"We've had multiple constitutional changes that were made by about, I don't know, 14 percent of the registered voters, and I just don't think that's right," he said.

Ashcroft said he would also like to see some changes to the initiative signature requirements.