Park on Adrian's Island to be known as Deborah Cooper Park 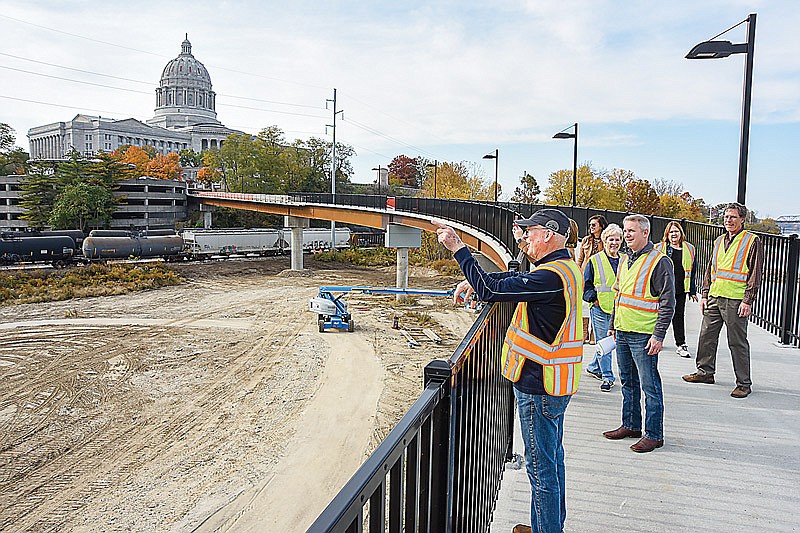 Members of the Missouri Bicentennial Bridge Commission made a trip across the bridge to the park on Adrian's Island on Tuesday, Nov. 9, 2021, for a tour of the work there. It was announced at Tuesday's Jefferson City Parks and Recreation Commission meeting that the park is named after Deborah Cooper, a passionate park proponent who envisioned a waterfront area where people could enjoy public facilities.

The park Jefferson City is constructing on Adrian's Island will bear the name of a woman who long ago dreamed of the development on the site.

Deborah Cooper's family set up a foundation following her death almost four decades ago, with the intent that the money the foundation received would help fund access to - and a park on - the island.

The park name, "Deborah Cooper Park on Adrian's Island," was actually determined in 2019, when it was written in as a requirement on a quit-claim deed included when the city obtained the property, staff pointed out.

The Deborah Cooper Foundation for Riverfront Development joined efforts in memory of Cooper, who died of cancer in January 1986. She was 34.

The executive assistant to Sam B. Cook, longtime chairman of boards for Central Trust Bank and Central Bancompany, Cooper was an outgoing and popular bank employee. Like Cook, Cooper had a passion for developing the property into a park.

Her obituary asked that in lieu of flowers, mourners contribute to the Deborah Cooper Historical Memorial Park Foundation.

The goal of the foundation, and the vision of other local leaders, was to develop more than 30 acres along the south bank of the Missouri River, stretching from just west of the state Capitol to east of the Jefferson City Correctional Center.

Technically not an island, the property was essentially cut off from the rest of the city by Union Pacific Railroad tracks. In 1960, Harry Adrian donated the property to the Jefferson City Housing Authority, which sold it to the city in December 2019. The quit-claim deed for the transfer not only spells out the name for the park, it also requires the city refer to any prominent parts of the property as "Adrian," and requires the city to construct and maintain a bronze plaque on the property commemorating the Adrian family's gift.

Although efforts to develop the property as a park have been ongoing since Cooper's death, access has always been an obstacle organizers have been unable to overcome. Early plans considered bridging the tracks or tunneling beneath them.

Both options proved too expensive (particularly for public spending) to be feasible. Organizers briefly considered creating a road across the rows of tracks in the area, but safety issues could not be overcome.

It wasn't until B.J. DeLong, a long-time supporter of the project, donated $3 million to it in 2015 that there was serious thought it might become a reality. DeLong, a Jefferson City philanthropist, and her husband founded DeLong's Inc., steel fabrication in 1944 in Jefferson City.

DeLong died in July 2021, about a month before crews broke ground on the 765-foot-long, 12-foot-wide $4.9 million bridge that now has her name - B.J. DeLong Bicentennial Bridge.

The Parks and Recreation Commission also on Tuesday approved the purchase and construction of a pavilion for the new park. The department had received six bids for the project from firms in Kansas and Missouri. It went with the lowest bid, $115,180, from ATHCO, a construction company from Lenexa, Kansas. Completion of construction is expected to occur in the spring.

The commission rejected the only bid it received for construction of a prefabricated restroom building to be placed in the park, because it was too high (at $77,625), staff said. Another concern was that it would not be complete until June 2022.

Instead, J.J. Gates, assistant director of Jefferson City Parks, said the city is going to buy the lower vault on which the restrooms will sit locally, then install it and build the structure on top.

"We'll be able to do it cheaper and much quicker," he said.

It should be completed within three or four months, Gates said.

Mayor Carrie Tergin said the Bicentennial Bridge Committee was at the park site Tuesday, and discussed when the grand opening and ribbon-cutting might take place.

"The best plan is going to be to give a day or two notice and have a ribbon-cutting," Tergin said.

She said there is a lot of public interest in the park.

Cooper's family had a vision back in the '80s, and its coming to fruition, she pointed out. There is cool and unique history with all the families that have pushed for the park for decades, she added.

Next week, staff should have a better idea about when the bridge project will be done, she said. Workers are expected to install the fencing that is over the train tracks and pour concrete near the Capitol.

"We know a lot of the amenities in the park might be closer to spring," Tergin said. "But, it's great to see the major trails getting done."

Print Headline: Park on Adrian&#8217;s Island to be known as Deborah Cooper Park