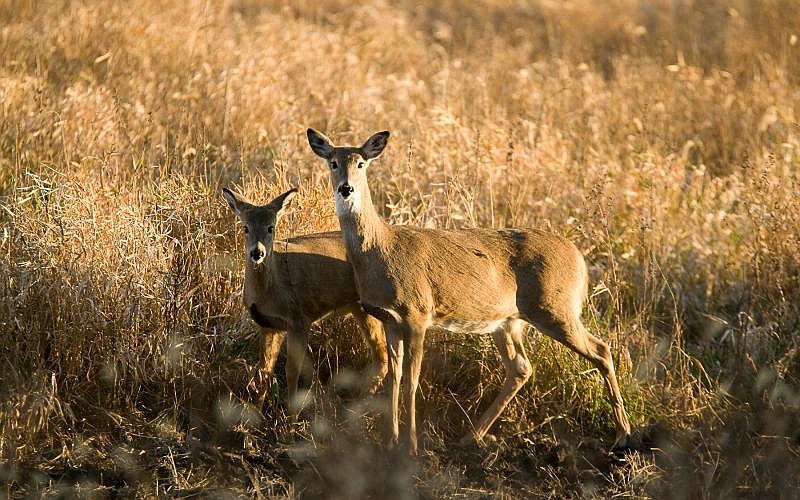 The Missouri Department of Conservation is expecting a higher than average harvest from this year's firearms deer season.

A combination of increasing deer populations across the state, more firearms antlerless permits in some counties and an extension of the antlerless portion of the season should make for a greater harvest this deer season, MDC officials said Tuesday.

The November portion of the firearms deer season is Saturday through Nov. 23.

Opening weekend, Saturday and Sunday, is the most popular time for deer hunting in the state as hunters usually harvest between a quarter to a third of the annual total during those first two days.

Those numbers should increase this year as the deer population is increasing throughout most of the state.

Deer populations in central and northern Missouri are also increasing as they rebound from the hemorrhagic disease outbreak in 2012, he said.

"In most counties, deer numbers are at desired levels and our surveys indicate that most hunters are satisfied with the numbers of deer they are seeing," Isabelle said in a news release. "An exception would be in far northwestern Missouri where the HD outbreak of 2012 coupled with habitat loss has resulted in populations being below desired levels in some counties."

While MDC has had fewer than 150 possible reports of HD this year, the relatively common viral disease among deer isn't near 2012 levels when there were more than 10,000 suspected cases reported in Missouri.

The 2012 outbreak prompted MDC to reduce the number of permits hunters could fill in many counties and shorten the length of the antlerless portion of the firearms deer season.

As the presence of HD dwindles and the deer population grows, MDC has increased the number of firearms antlerless permits around the state and extended the antlerless portion of the firearms deer season from three days to nine days this year.

None of the counties surrounding Cole County had changes.

The antlerless portion of the firearms deer season runs Dec. 4-12 and will be followed by the alternative methods portion Dec. 25 through Jan. 4.

Joe Jerek, MDC statewide news services coordinator, said the department works off of educated estimates to determine the state's deer population, which is currently estimated to be 1 million-1.3 million.

Jerek said the department then compares that estimate to the state's annual deer harvest, information provided by hunters through surveys and other department survey tools to monitor Missouri's deer population.

The harvest is controlled by limiting the maximum number of deer each hunter can harvest to two, Jerek said, with the type of permit and season determining the number and kind of deer that can be taken.

He said hunters harvest roughly a quarter of the state's total deer population each year, but numbers rebound quickly.

Isabelle said the department strives to manage the state's deer population to accommodate hunters and wildlife viewers but also prevent the animals from creating unsafe driving conditions or burdening farmers.

"Each year, we evaluate the status of the deer population in each county and determine the optimal regulations based on both the population trend and where deer numbers are in relation to levels that are acceptable to our stakeholders," he said.

Harvest from the archery season is currently lower than it was at this time last year because of a warmer start to the season.

As of Tuesday, 43,905 deer had been harvested from the archery season.

"During the early part of last year's archery season, we had some unseasonably cool temperatures that resulted in great hunting conditions," Isabelle said. "The warmer temperatures we had to start the season this year have suppressed harvest a bit compared to last year."

Harvest from the early youth portion of the firearms season, which ran Oct. 30-31, is similar to last year at 15,608 deer and is about average for the past five years, Jerek said.