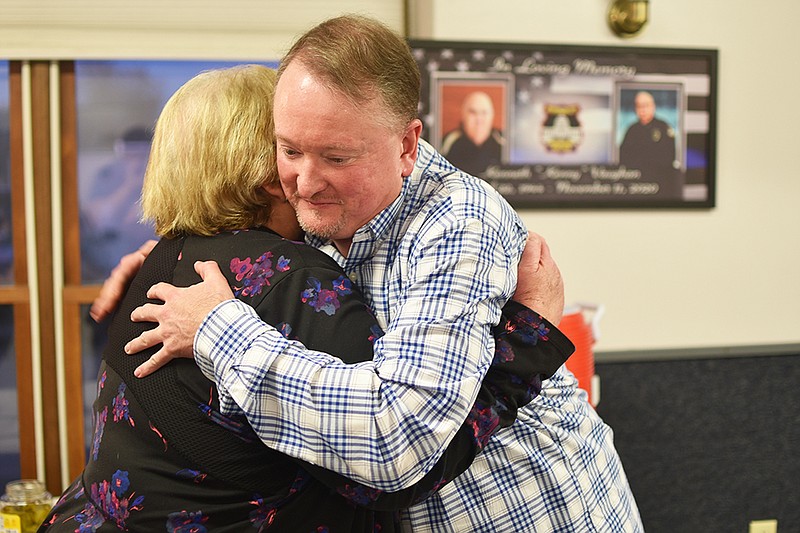 <p>Garrett Fuller/News Tribune</p><p>Don Soph, right, secretary for the Holts Summit Lions Club, hugs Debbie Vaughan Saturday night after the Holts Summit Lions Club building was named in honor of her late husband, Kenneth “Kenny” Vaughan. Kenny Vaughan served as a Lion from 1975 until his death in 2020. He also served as a police officer for the Jefferson City Police Department.</p>

It's better late than never.

That was the sentiment Saturday at the 50th anniversary celebration for the Holts Summit Lions Club, which was celebrated a year late due to the COVID-19 pandemic.

Along with food and refreshments, the ceremony featured an oral history presentation and acknowledgements to the Girl, Boy and Cub scouts.

Since being chartered Sept. 29, 1970, the Lions Club has served the Holts Summit community in numerous ways. Along with hosting the Holts Summit Soup Kitchen when it started in 2008 and formerly sponsoring baseball and softball teams, the club has helped fire victims, provide Buddy Packs to area children and provide assistance in community activities like the Holts Summit Police Department's Trunk-or-Treat and Shop with a Cop programs.

They also help the local Cub, Boy and Girl Scout troops. The Holts Summit Cub Scouts troop is chartered through the Lions Club.

Allen Berhorst, a long-time member of the Holts Summit club, was named a Melvin Jones fellow for "dedicated humanitarian services." Roseanne Ridenour, club vice president and event chairwoman, said the award is one of the highest awards a Lion can receive.

" I never expected to get one," he said. "It's usually for someone who does a lot of stuff for the club. I've just been a member."

Throughout his time as a member, he has served as president of the club for six years and helped with numerous activities - including helping set up fundraisers such as the haunted house and fireworks sales.

"He just helped anywhere he was needed in the Lions Club," Ridenour said. "Plus, he served his community being a Lion."

After presenting Berhorst with the award, the ceremony ended with dedicating the Lions Club building to a long-time Lion. The building is known as Vaughan Hall, after Kenneth "Kenny" Vaughan.

Vaughan served from 1975 until his death Nov. 11, 2020. In addition to being a husband, father and a police officer at the Jefferson City Police Department, Vaughan was involved with the Lions Club - even helping build the building that is named after him.

The plaque naming the building after Vaughan reads: "A servant, a husband, a father, a friend, and, most of all, a strong, passionate, roaring Lion. Thank you Lion Kenneth 'Kenny' Vaughan for exemplary service, commitment and dedication to the Holts Summit Lions Club from 1975 to 2020. The hall is far too small to contain your spirit, but we who gather here will always remember."

Vaughan's wife, Debbie Vaughan, was on site for the dedication ceremony. Debbie is also a member of the club, along with others in their family.

"He spent many, many years and many, many hours up here (at the Lions Club)," Debbie Vaughan said about her husband. "Kenny would be very proud (of the award) and very humble. The Lions Club meant a lot to him."

Debbie Vaughan also discussed the impact the Lions Club has had on the Holts Summit community through the years.

"They have done so much over the years," she said. "They've helped a lot of people. They've helped the community. And it was really kind of like a brotherhood or a family."